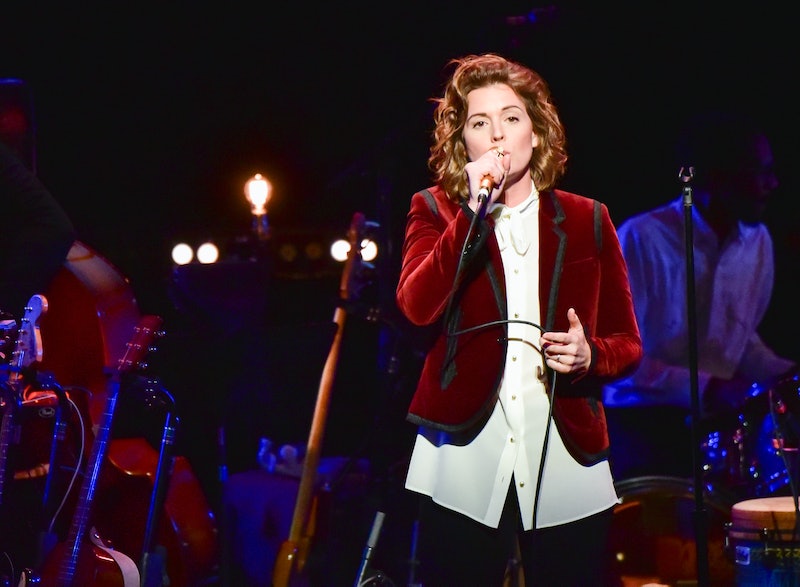 When the 2019 Grammy nominations were announced on Dec. 7, they included Brandi Carlile, who received six nods for her album By The Way, I Forgive You, making her the most nominated woman of the year. In spite of this, and her one prior nod for Best Americana Album in 2015, Rolling Stone called Carlile “widely unknown” in a recent article, and that's not wrong. While Carlile’s career has spanned almost two decades and her music has been a staple of pop culture, these Grammy honors mark the first time she has received more mainstream recognition for her work. And that's likely because Carlile, an openly gay woman, has a versatile, raw sound that blends elements of rock and folk with deep country roots — and falls outside the bounds of what has, in the past, been deemed worthy of the “Big 3” Grammy categories.

Since 2005, Carlile and her long-time collaborators, Phil and Tim Hanseroth, have released six albums that have traversed genres and received rave reviews. Her first LP, self-titled, led to opening gigs for the likes of Ray LaMontagne and Tori Amos. Her second album, The Story, peaked at number 41 on the U.S. Billboard 200 chart, and its titular song was beautifully belted by Sara Ramirez on Grey’s Anatomy’s 2011 musical episode. Carlile has worked with artists ranging from Dolly Parton to Sam Smith, and her song “The Joke” was featured on President Obama’s year end playlist. She even had a small cameo in this fall's cinematic stunner A Star Is Born.

Yet in spite of these accolades, Carlile told Billboard in December that she didn't think she would have made the cut for Album of the Year if the Recording Academy hadn’t expanded their list of nominees from five to eight, which “helped create room for talent that [is] left of mainstream.” The change, she said, represented a “shift in consciousness” that created “more diverse nominees list. And that’s diverse in all ways: in genre, in sexual orientation, in gender.”

Soon after the Grammy nominees were announced, Out Magazine published “The Queer Guide to This Year’s Grammy Nominations,” which listed the LGBTQ people and allies represented. Artists noted included Janelle Monáe and Kacey Musgraves — but not Carlile, who has been out since 2002. While she was eventually added to the list, the omission seemed to speak to the ways in which being slated as an Americana musician has kept her out of the mainstream spotlight. She doesn’t fall into the pop category, and you won’t find her queerness explicit in her lyrics, like you may with artists like Mary Lambert or Tegan and Sara.

Historically, pop music has been far more inclusive of LGBTQ artists than the country scene. Just this year, there was the rise of queer artist Hayley Kiyoko, who recently won Billboard’s Rising Star award and coined the hashtag #20GAYTEEN. 2018 also brought us Monáe’s “Make Me Feel,” which has been hailed as a bisexual anthem; Troye Sivan's album Bloom; Demi Lovato and Kehlani sharing a kiss on stage; and singer-songwriter Teddy Geiger coming out as transgender.

The country music world, meanwhile, isn’t known to be brimming with LGBTQ artists (the few that have achieved success include Brandy Clark and Billy Gillman). The genre's assumed fanbase, and the content of its biggest songs, often invoke the parts of America that LGBTQ people find unsafe; songs about guns, God, and women in cutoffs allude to the kind of red-blooded misogyny and heteronormativity that lock LGBTQ people out of so many aspects of society and culture.

As a queer woman, my relationship with country music is complicated. The charts are dominated by men, and while the country songs I love can be affecting and well-crafted, I’ve long felt that they generally are not made by or for people like me. That being said, there have been some signs that the genre is trying to become more inclusive. In 2013, Musgraves released “Follow Your Arrow,” a song that she co-wrote with Clark and Shane McNally. It initially caused a stir because of its lyrics, “kiss lots of boys / or lots of girls / if that’s something you’re into,” but became a success (and cemented Musgraves as an LGBTQ ally).

But Musgraves’ hit, with its explicit reference to queerness, is an outlier. In a 2018 interview with Out, “Kacey Musgraves is ‘Pissed Off’ Country Music Isn’t More Queer-Friendly,” the singer quoted a peer who said, “I grew up gay in a small town, and country music has always felt like a big party that I wasn’t invited to.” Many LGBTQ people still find the overall landscape of country music to be one of exclusion.

Carlile has always, to me, felt like the exception to this. Her country roots may seem at odds with other aspects of her life, but in reality it adds a complexity to her artistry that parallels the diversity of experiences in the LGBTQ community. I first saw her perform live at a small, acoustic event in 2011. I was in college, had come out the year before, and, like many young queer people, was constantly searching for representation in all forms of media. I appreciated Carlile’s queerness long before I understood my own; knowing that her music stemmed from lived experiences that I could relate to on a different level made it all the more meaningful.

And while she is admittedly not one to “make a spectacle” of her queerness, as she told the LA Times in 2009, it is not something she’s shied away from in talking about its influence on her music. A recent interview with NPR stated that Carlile “bent and broke Americana and folk stereotypes as an openly gay woman with outspoken progressive politics", and referenced how her absolving the pastor who refused to baptize her as a teen because of her sexuality played a role in the album’s construction. In 2015, a three-part documentary series was filmed during Carlile's Pin Drop Tour, and her wife and daughter were seen along for the ride. When I saw her perform earlier this year in Toronto, she prefaced the heart-wrenching “Party of One” with an anecdote about her marriage and kids.

As subtle as her queerness may be in Carlile's music, there is a comfort in these moments that reminds LGBTQ listeners that you can live openly and still create the content you want to create. With By The Way, I Forgive You, it felt like she managed to bring the candid honesty of her live shows into the recording booth, the breadth of her experiences finally coming to the forefront. And it’s because of this that her recent Grammy nods feel like an overdue victory.

In the recent interview with Billboard, Carlile spoke to how queer musicians who have paved the way, like K.D. Lang and Freddie Mercury, “have been parodied for being gay through the course of their career,” and how the presence of so many women and LGBTQ people in this year’s Grammy nominations is a testament to how far we’ve come since their time. She told Billboard that “being recognized by the Grammy’s was such a far-fetched concept,” and these nominations are “a dream come true.” When she spoke to Rolling Stone, she said that the nods are “the closest to anything mainstream that’s ever happened to me...and it’s happened for the most personal and exposing record I’ve made.”

Carlile’s music has always felt like a safe haven, a musical space for, to borrow from Hannah Gadsby, the quiet gays to go and live through heartbreak, loss, and joy. So while some people may find Carlile’s nominations “unexpected,” they come as welcome validation for those familiar with her music. When all is said and done, a queer woman who can nail a country ballad as quick as a rock anthem is the most nominated woman of the 61st annual Grammy Awards, and that’s pretty freakin' cool.