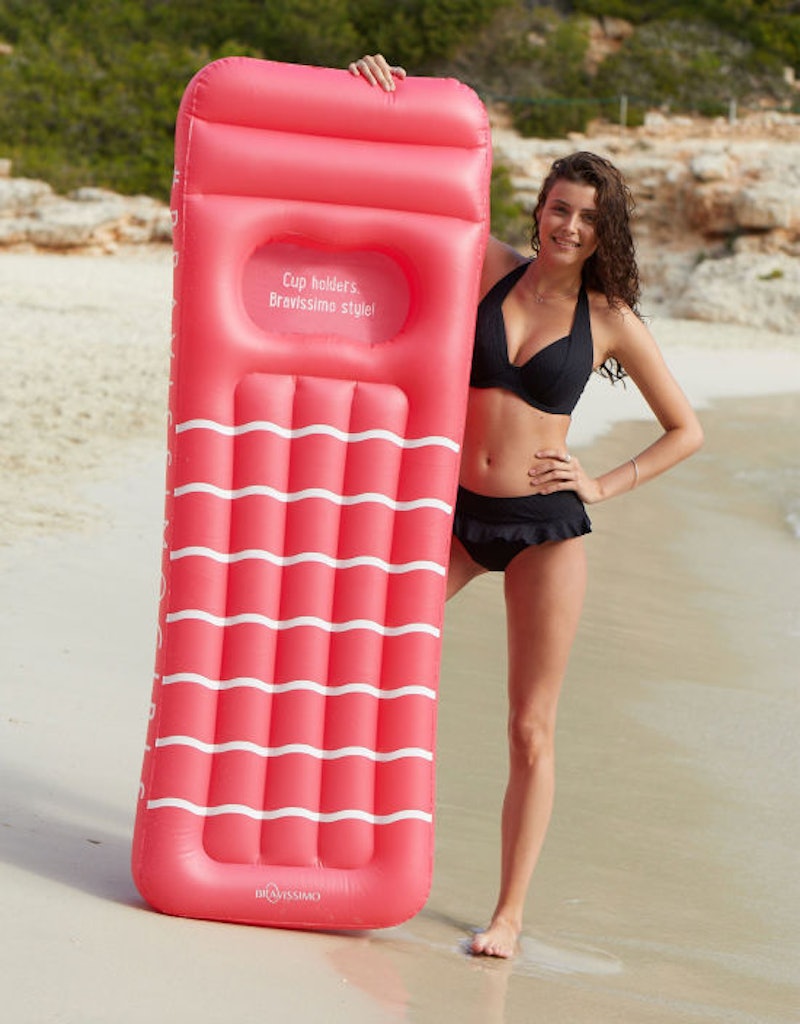 When brands make April Fools' jokes, they usually aren't that funny — we just roll our eyes and spare a chuckle if we're feeling generous. But a British lingerie brand has turned their April Fools' prank into a legitimate product, and it's a blessing for any of us who have large chests and want to live our best summer lives. The Bravissimo Lilo is a pool float that has built-in "cup holders" (see what they did there?) for your boobs, so you can comfortably float on your stomach. It sounds outlandish, of course, but it's also the innovation in pool float technology that you never knew you needed. According to the company, after receiving an overwhelming response from customers who wished the product wasn't a prank, they decided to make it a reality.

The lilo — British slang for pool float — can be ordered by anyone willing to shell out $45, which is a bit pricey for a pool float — but it could even the boob-comfort playing field, so it seems like a small price to pay. Shipping is an extra $5. If you're in the UK, the float is only £25, which is approximately $33 in USD. It isn't returnable once it's opened, per the product page, but who would want to send this genius invention back?

If you don't have large breasts, you've probably never realized this is even a problem that exists. For those of us who are top-heavy, laying down on your stomach is quite a feat. You either splay your boobs to the side or just sit propped up thanks to your chest. You know how massage tables have a little hole for your face? It's the same idea. Cupholders are the perfect solution, and I kind of want them for my bed now. Bravissimo markets itself as a lingerie line for people with big boobs, so the product seems like a great fit. And whether you're purchasing for yourself or for a friend who would love it, it's sure to be a hit at the beach.

The only other boob floats on the Internet are pretty lewd and feel like a frat party joke, not something you'd actually want to use in front of other people, let alone Instagram. But it's covert enough that you wouldn't be embarrassed to use this in front of others, and it actually gives you a reason to look forward to floating around this summer.

Bravissimo notes that they developed this with a short turnaround time — April Fools' Day wasn't even three months ago, which is pretty impressive. That's essentially how long it took me to decide the color of my couch, and they were able to create an entirely new product. Because it was developed in a rush to make it ready for summer, the company is open to suggestions. From the Lilo's information page:

We’ve developed it in record time to make it available for the summer so if you think we could do something better next time, please tell us – you’re always brilliant at giving us your views and we love to learn from you and improve what we do.

I haven't used the product (yet!), so I can't comment on whether it's as amazing as it seems, but I can't imagine anyone having complaints. This is what it looks like to live the dream without letting boobs get in the way, and I'm a fan. Bravo, Bravissimo — you've done what few companies are able to do by making an April Fools' stunt worth our time. Everyone else, look to them — if you promise a nonsensical new product to trick your readers, be ready to whip up a prototype within a few weeks. This also goes for people who fake engagements and other life events on the prank holiday — I expect everyone to follow through.