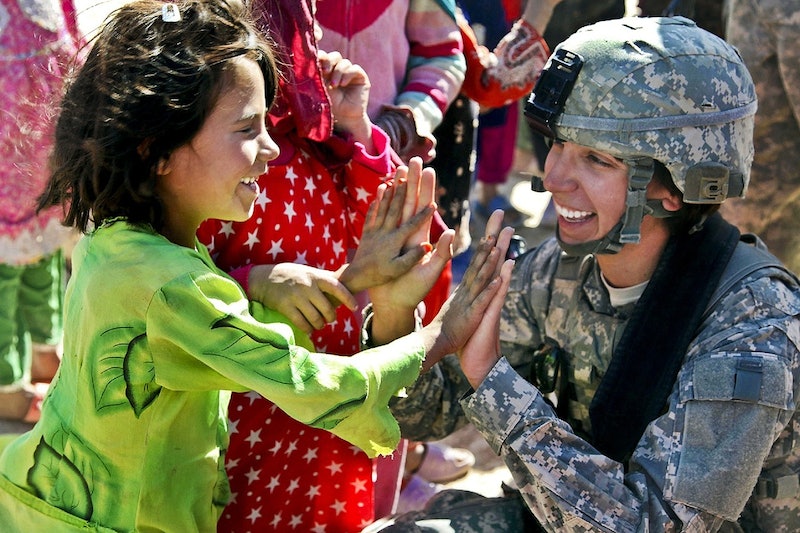 Coming from a family of military veterans, I am familiar with the mental health challenges veterans and their families face. One often-overlooked group even among veterans, though, are young women who serve in the military. Female millennial veterans are at higher risk for suicide, anxiety, and depression than other demographics, according to the Department of Veteran Affairs. While awareness of the importance of making mental health services available to returning veterans has risen in recent years, a study from the Department of Veteran Affairs noted that suicide rates for female veterans ages 18-29 has increased significantly since 2001. Additionally, females veterans are more than twice as likely to die from suicide than civilian women. This data is a wake up call that the VA is largely failing female veterans and their families once they return home.

In the digital age, apps have proved as a helpful support tool for those suffering from mental health disorders like anxiety, depression, post traumatic stress disorder, and military sexual trauma. Now, National Geographic, in a partnership with 360i, has released Bravo Tango Brain Training, the first-ever voice activated meditation app designed specifically for veterans to provide another tool in the effort to enhance mental health support for America’s veteran community, according to a press release.

Females Vets At Higher Risk, But Get Less Help

Women make up 10 percent of all U.S. veterans, but suicide rates among women veterans increased more than 62 percent between 2001 and 2014 — whereas suicide rates among male veterans increased less than half that number during the same time period despite men making up 90 percent of the veteran population. What's more, "VA researchers found the rate of suicide to be higher among women who report having experienced military sexual trauma (MST) — that is, sexual assault or sexual harassment during military service — compared to those who have not experienced MST," according to a fact sheet from the Veterans Health Administration.

While the VA does offer mental health programs for female veterans, I know from my family's experience that navigating the red tape of the VA can be akin to trying to lift an object off the ground using only your mind. Additionally, because they only make up 10 percent of the veteran population, women often have a harder time finding someone who will take their complaints seriously, and they often don't feel safe in co-ed settings, or even with a male doctor. Some of these struggles are documented in the documentary The Invisible War, an emotional look at MST survivors.

"Improving access to women-specific programming matters for many reasons, not in the least because opening up in group therapy sessions with men who may have dismissed women’s service or even been perpetrators of harassment or assault can be difficult if not impossible, so many women opt out of co-ed programming and therapy altogether," The Hill reported.

This is where Bravo Tango Brain Training can help. The meditation app is now available for free on smartphones via the Google Assistant app and Google Home Devices, and all you have to do to get started is say, "OK Google, talk to Bravo Tango." The program will then guide you to an appropriate exercise based on how you're feeling. According to the press release, Bravo Tango recognizes more than 40 moods, including anger, loneliness, anxiety, disappointment, regret, sadness, fatigue, fear, and insomnia.

Exercises include breathing and focus, grounding and visualization, and even interpersonal connection and muscle relaxation. While this new technology is an effective and accessible method for reducing stress and anxiety, experts caution that it should not be used as a replacement for ongoing professional care, but to supplement an existing treatment plan.

Los Angeles-based meditation teacher and coach Amy Sandler explained on a blog about mindfulness that this meditation practice works by helping people create some more space between “stimulus and response,” which basically means it can train your brain to pause and process what is actually happening before giving a knee-jerk stress response (that you might regret later).

According to National Geographic, the app was developed in partnership with former Air Force psychologist and combat veteran Dr. Michael Valdovinos who specializes in military and veteran psychological health. Despite meditation dismissed as new age-y in military circles, Dr. Valdovinos claims this treatment works. "Many veterans are hesitant to try meditation and mindfulness because of societal stereotypes it carries in our community. In my practice, however, I’ve found meditation, mindfulness and voice therapy to be highly effective in reducing stress, refining focus, and raising optimism," he said.

One of the things Bravo Tango Brain Training does is increase feelings of safety, and Dr. Valdovinos called it, "a bridge to seeking help" because it brings a unique approach directly to the veteran community where they feel safest: their homes. Studies published in the Journal of Traumatic Stress, Military Medicine, and the Journal of Clinical Psychology found that breathing-based meditation intervention resulted in reduced stress, anxiety, feelings of depression, and slowed respiration rates, National Geographic reported in the press release.

Women in particular often feel invisible in the veteran community post deployment as they struggle to navigate a system set up to serve men. "Women vets come home and we blend back in," Kathryn Wirkus, founder of Women Veterans of Colorado, told the New York Times. "We go back to being mothers, wives, schoolteachers, nurses, doctors, whatever. We don’t hang out at bars wearing funny hats that say ‘World War II vet.’ We aren’t easily identified by our haircuts or the clothing that we wear. If I walked into a room, nobody would think I was a veteran."

Wirkus went on to say that she was once ignored in a VA waiting room for 45 minutes because she was mistaken for a spouse. When you're already struggling with mental health issues, the added layer of not being seen, heard, or taken seriously can further compound existing trauma. Supplementing treatment with an app like Bravo Tango Brain Training can help female vets develop emotional tools necessary to handle this kind of stress in addition to service-induced trauma.

"As we began to explore the veteran support space with 360i, it became apparent that many of the current wellness app options for veterans do not address their specific needs," Courteney Monroe, CEO of National Geographic Global Networks, said. "Technological advances often leave veterans behind, and we hope we can do some good by providing this simple, but powerful technology."

Personally, I am currently doing a 30-day breathing meditation challenge with a group of friends. We have all committed to meditating every day for the month of November and checking in with each other about our progress. After nine days I definitely feel more calm, and am experiencing less anxiety and depression.

Supplementing meditation with traditional treatment for females veterans can offer up similar results, which in turn could make it a little less stressful to navigate post-deployment life and treatment options. I don't want even one more parent, child, sibling, friend, or spouse to go through what my dad and our family went through. Making treatment options easily accessible to female veterans is the first step on the long road to healing.