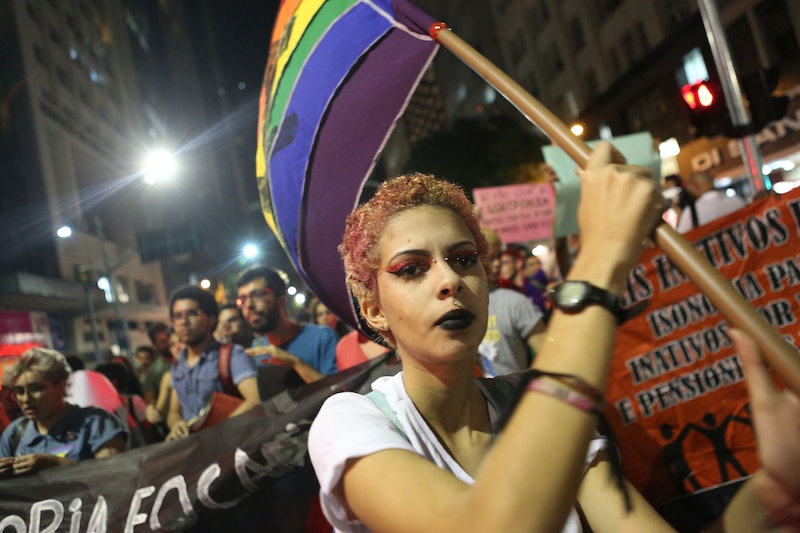 After a vote in the nation's high court, Brazil is set to criminalize homophobia, VICE News reported Thursday. Six of the Brazil Supreme Court's 11 judges ruled that discrimination based on sexual orientation or gender is unconstitutional, and the decision will take effect after a second procedural vote in June, according to VICE News.

It's a welcome development for LGBTQ Brazilians, many of whom have been living on edge since the country elected self-proclaimed "proud homophobe" Jair Bolsonaro to the presidency in October. Bolsonaro, who once that said he'd be "incapable of loving a homosexual son," was sworn into office in January; since then, at least 141 LGBTQ people have been killed in Brazil, according to the human rights group Grupo Gay da Bahia.

But anti-LGBTQ violence in Brazil predates Bolsonaro's ascendence to the presidency. Grupo Gay da Bahia says that 420 LGBTQ people were killed in Brazil in 2018, according to the BBC, while the Trans Murder Monitoring Project says that Brazil is the most dangerous place in the world to be trans, with 167 trans people in the country killed between September 2017 and September 2018.

According to the Rio Times, five judges on Brazil's high court have yet to vote on whether or not to criminalize homophobia; they will do so at a session on June 5, after which point the ruling will take effect. But because a majority of judges have already voted to implement the anti-discrimination law, the June 5 session will largely be a formality, and won't change the result of Thursday's ruling, VICE News reports.

However, the court's ruling means that even if the Senate doesn't approve that law, LGBTQ Brazilians will be a protected class in the country.

“There is no guarantee the bill will pass, and even if it does, it can be vetoed and homophobia will continue,” Fox said, according to the Independent. “The judiciary must act in defense of minorities against violence by the majority.”

Bolsonaro, who hasn't weighed in on the court's ruling yet, recently drew criticism for saying that Brazil "can't be a country of the gay world, of gay tourism," because "we have families." On Friday, a poll was released showing Bolsonaro with net negative approval ratings for the first time since taking office, Reuters reports.

Although this is the first time Brazil has enacted anti-discrimination protections for LGBTQ people, same-sex partners are allowed to marry and adopt in the country, Reuters reports.