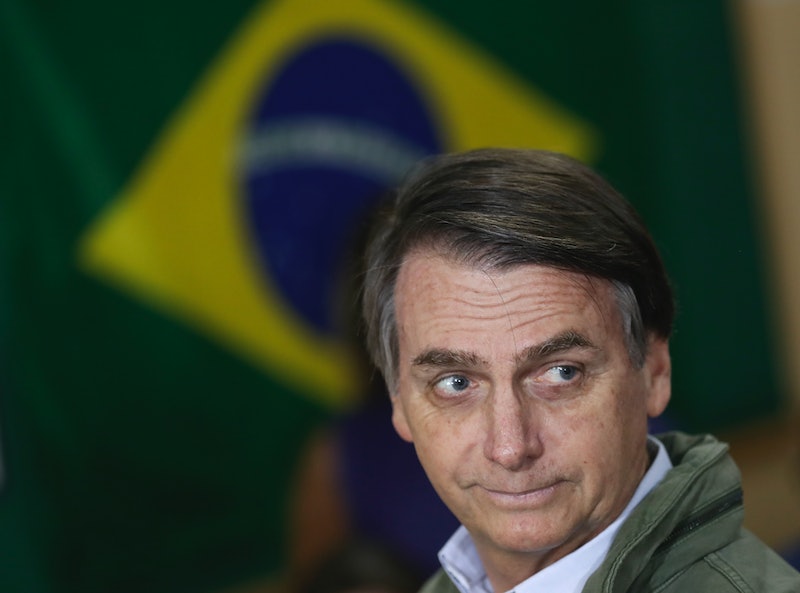 Brazil on Sunday elected a far-right leader in the mold of Hungary's Viktor Orban and the Philippines' Rodrigo Duterte. Academics have called him the most extremist leader ever elected in Latin America — and his win could have huge implications for the country's minorities. Women and LGBTQ Brazilians see Jair Bolsonaro's presidential win as a threat to them and democracy itself.

To many, his candidacy was so repulsive that the main campaign against him was "Ele não!" or "Not him!" in English. That Brazilian version of "Never Trump" did little to slow down his rise in the polls — nor did a stabbing at one of his campaign events in September. Bolsonaro won the first round of voting with 46 percent of the vote earlier in October and increased his share to 55 percent in the second round, according to the initial numbers reported Sunday.

Minorities in general, but especially women and trans Brazilians, are concerned about his political rise — and now victory. The former military officer's comments have been widely covered in the media — particularly his comments about women and homosexuality. Brazil’s attorney general even charged him with the crime of inciting hatred and discrimination against not only against women and LGBTQ people, but also black and indigenous Brazilians.

Members of São Paulo’s LGBTQ community told the Guardian of how levels of violence, particularly against trans people, have increased since Bolsonaro started his campaign. "It’s as if the gates of hell have been opened — as if hunting season had been declared," the founder of São Paulo's Gay Pride Parade told the paper. The report details brutal attacks on and murders of trans women in recent weeks during the election, and the situation was already dire to begin with. More trans women are killed in Brazil than anywhere else on earth.

Women also worry that his policies could drive Brazil backward in terms of gender equality. "He’s violent. He’s said repeatedly that he believes women should earn less than men, and we need to recognize that a president with a discourse like his would be a huge step backwards for women," Giovanna Ramalho, a student at UERJ, Rio de Janeiro’s state university, told Foreign Policy magazine. "He doesn’t deserve to have such an important role in our country.”

Some racial minorities are notably less concerned. Similarly to the way U.S. pundits on the left suggested low-income Trump voters were voting against their own interest, political strategists in Brazil see a similar phenomenon. Polls show black and mixed-race voters supported Bolsonaro at a level of 47 percent, compared to his opponent's 41 percent.

"It is a nation of largely mixed-race, lower-middle-class people. But people are putting aside their personal identities in search of political renovation," Alexandre Bandeira, a political strategist in the Brazilian capitol, told the Washington Post.

But for those who do fear Bolsonaro's rise, there has been little to assuage their fear. Carla Jesus, an Afro-Brazilian lesbian activist and teacher, said this is the beginning of a dark chapter. "People are looking at us differently now with the campaign,” Jesus told the Washington Post. "They aren’t shy about saying blacks and lesbians need to die. I’m feeling more than fear. I’m panicking about him winning."

That combined with some police raids at public universities also has the left worried. Police have interrogated professors about anti-fascist literature, saying that it is election literature. Activists on the left say it harkens back to the days of the military dictatorship in the 1960s to 1980s, when leftist academics were tortured at the hands of the military government.

There will be very little external pressure from the United States, it seems, to prevent any violations of human rights. "Had a very good conversation with the newly elected President of Brazil, Jair Bolsonaro, who won his race by a substantial margin," President Donald Trump tweeted early Monday. "We agreed that Brazil and the United States will work closely together on Trade, Military and everything else! Excellent call, wished him congrats!"

What's likely to be different this time compared to the time of the dictatorship is the active response from civil society. Rosana Pinheiro Machado, a Brazilian anthropologist, told AZMina magazine that resistance would be women's tactic of choice in Bolsonaro's Brazil.

"A Bolsonaro victory would legitimize misogyny being used as a big joke," Pinheiro Machado told the magazine, commenting on his campaign rhetoric. "The most immediate effect of that result would be symbolic. And of course after there would be a huge resistance, like what occurred after the election of Trump in the United States."

Brazilian institutions are independent this time around, too. Brazil's Attorney General Raquel Dodge — the same one who went after Bolsonaro's hate speech — has taken a case to the country's Supreme Court to ensure that universities can remain independent and enjoy freedom of expression, as the Brazilian Constitution promises.

LGBTQ activists agree. "Nobody is going back into the closet," Renan Quinalha, a lawyer and LGBTQ activist in São Paulo told the Guardian. "We will resist."