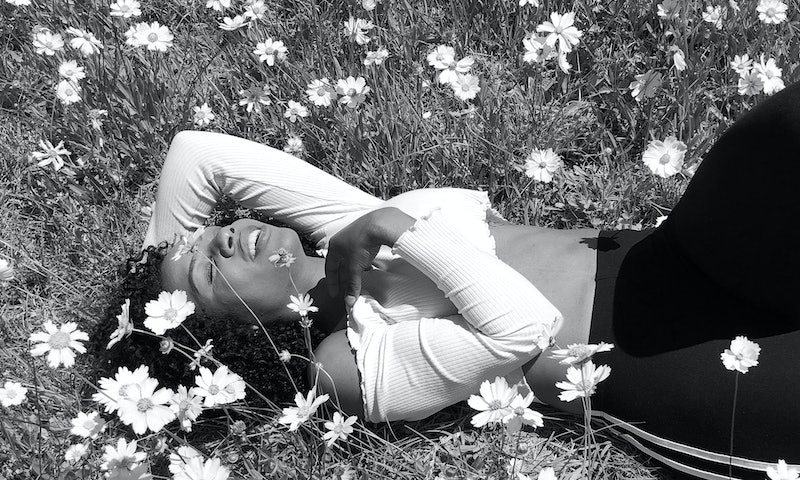 Jessica Florence has just flown into New York City from Florida to do a photoshoot a few hours before our meeting. She has her hair tied into a bun on the top of her head, curls flowing down, with her baby hairs perfectly laid. And she's rocking a subtle brown lipstick that would give anyone who was alive during the '90s an instant feeling of nostalgia.

Looking at Florence, no one would ever be able to tell that she received a breast cancer diagnosis at a young age — 22 to be exact. Her skin is effortlessly glowing, her energy is vibrant, and she has a smile that's contagious. But they say you should never judge a book by its cover.

April 2014 marked the beginning of Florence's long journey to finding out she had the disease. She started suffering from back-to-back colds, which gave her the feeling that something was up with her health. Florence was a busy student at the time who was also juggling a part-time job and planning a move from Jacksonville to Gainesville to transfer to the University of Florida. But despite her busy schedule, she visited several doctors between then and the start of the new year. Those physicians all came to the conclusion that she was just experiencing a lingering cold.

In 2016, Florence found a small lump in her right breast. She wasn't worried about it at first, but when the mass started to become painful and tender, she decided to get her breasts checked out. After administering an exam, her doctor believed that the lump was just a simple fibroid — nothing to be too concerned about. Then, over the next year and a half several other physicians gave Florence the same prognosis. And thinking she was too young to develop breast cancer, they all told her a mammogram wasn't necessary. Of course, she trusted her doctors: They were the experts. But then she started noticing changes that aligned with the symptoms of breast cancer.

"I was seeing some type of pus come out of my breast and...my nipple was inverted," she shares. It was only then when she was sent in to do an ultrasound, as well as a mammogram and a biopsy — which lead to her stage IIIA invasive ductal carcinoma diagnosis.

As her doctors recommended that she go through six rounds of chemotherapy, take five different chemo drugs, followed by two months of radiation, Florence's biggest fear wasn't the cancer itself — it was knowing that she would lose her hair. "Being natural [is] a long journey for us black women, and I was at a point in my life where I wanted my hair," she shares. "I just thought, 'I love my hair, my hair is me, and now my hair is going to be gone.'"

The treatment took a serious toll on the then 22-year-old's self esteem, and her partner at the time only played the role of supportive boyfriend until Florence's hair began to shed. "He started getting really afraid of me and the changes I was going through," she remembers. They eventually separated. And after months of chemo and radiation — when she started to experience not only hair loss, but also acne on her face and back, hyperpigmentation all over her body, along with the loss of her right breast — Florence's confidence hit an all-time low.

"I felt so... I felt really ugly, honestly," she shares. "It's just so hard to think of yourself as beautiful when you're going through things like that."

The Florida native also experienced what she described as "skin sores" and extreme skin sensitivity that she attributes to the chemotherapy. At the time, she says she never saw a dermatologist, partly because it wasn't covered by her health insurance. But looking back, she wishes that she had. "I kind of just let it heal, drink water, and that was it," Florence shares.

Her insurance posed another roadblock for the young breast cancer survivor as her provider refused to cover a prosthetic breast. "I walked around with one breast for a long time," she remembers.

But wearing lipstick made her feel good on her worst days — MAC's Ruby Woo shade to be exact. And from there, her love of makeup started to grow. She began to learn how to give herself a bold brow, then played around with foundation to cover up her unwanted dark spots. She even started getting henna designs on her head when she wasn't in the mood to wear throw on a wig, after getting the idea from Pinterest.

When the time came for her to undergo breast reconstruction surgery, Florence's doctors weren't able to provide her with photos of the procedure on a black body, because they didn't have any, which understandably left her feeling uneasy. "I wish I would have known [what I'd look like,]" she asserts. "Then I would have felt more prepared ... Or I wouldn't have been as traumatized about it, seeing it, or going through it." To make things worse, after the procedure was completed, Florence's doctor encouraged her to get nipple reconstruction surgery, even making appointments on her behalf, despite her saying no — numerous times. Then he asked, "Don't you want a boyfriend?"

Initially stunned by her physician's bravado, Florence quickly shook it off, because this journey had taken her on a new path. No longer was she worried about men and whether or not they'd accept her new body — she was now setting her own beauty standards. "I have one boob, that's all he needs," she jokes when thinking of a future partner.

And she definitely hasn't changed her mind about getting nipple surgery. "I had other plans with my mastectomy," she shares. "When I got my reconstruction, I wanted a tattoo." In fact, Florence has already booked an appointment to get it done, but she's keeping mum on the details for now. "It's a secret," she says, trying to hold back her smile.

But the new ink isn't the only reason the now 25-year-old has to smile. December 2018 will make it a year since Florence has been in remission, and while, of course, she's grateful to be in good health and have her life back on track, there's one lesson breast cancer taught her that she will never forget. "Beauty is not just what you look like," she says confidently. "It's the struggle which you go through — the resilience, that strength that you have. It's the scars, it's the bald head. All of those scars that I have are beautiful, and they are what make me beautiful."

Now, more than ever, Florence is loving the skin she's in.

More like this
All The Products Hailey Bieber Used For Her Birthday Makeup Look
By Olivia Rose Ferreiro
Kim Kardashian On The Beauty Hack That “Changed My Life, My Skin, My Confidence”
By Taylor Jean Stephan
BeautyBio’s GLOfacial Pore Cleansing Tool Is So Grossly Satisfying
By Erin Stovall
This Week’s New Makeup Releases & More Beauty Headlines
By Audrey Noble
Get Even More From Bustle — Sign Up For The Newsletter