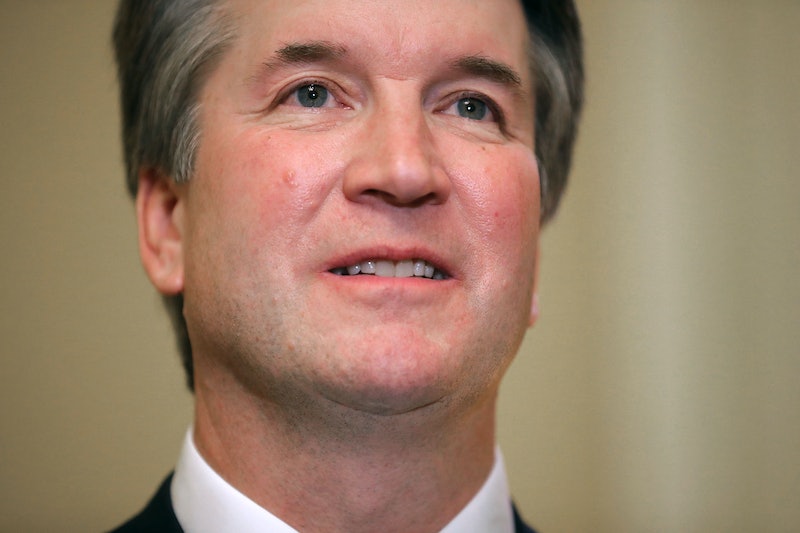 As the recently appointed nomination to replace Justice Anthony Kennedy on the Supreme Court, Brett Kavanaugh's stance on environmental regulation just grew in importance, now that he might be one of nine people determining the highest levels of legislation for the nation. Kavanaugh has a long history of opposing a wide range of laws intended to protect the environment. He has worked to deregulate several Obama-era environmental regulation policies, and now, if appointed to the Supreme Court, it's likely that he will take these beliefs to his work on the bench.

According to Vice, Kavanaugh's 12 years on the lower court revealed a pattern of rulings against environmental regulation and repeated arguments that Congress should be the only entity to set environmental laws, rather than agencies like the Environmental Protection Agency (EPA).

This on its own is an alarming trend, but especially given that Kavanaugh will be replacing Kennedy. Kennedy was consistently the swing voter of the Supreme Court, and actually voted to uphold a crucial climate change ruling which required that the EPA regulate the pollution of greenhouse gases.

If Kavanaugh replaces Kennedy, not only will the bench have lost a moderate swing voter, but it will have gained a legislator who is virtually against all environmental regulations by any entity besides Congress.

Though this seems like a totally reasonable policy (to prioritize Congress as the primary creator of legislation for the country), it's seriously problematic for environmental regulation and laws because of how slowly Congress moves and how dead-locked the legislative body can be sheerly due to partisan politics.

With an internationally-agreed upon epidemic as severe and time-sensitive as climate change, requiring all environmental regulation to first go through Congress (rather than being issued by the EPA) would basically mean that all laws would take much, much longer to go into effect.

During his opening remarks after being appointed by Trump as the nomination for the Supreme Court vacancy, Kavanaugh said, "If confirmed by the Senate, I will keep an open mind in every case."

However, people are skeptical that this necessarily means any type of good news for environmental regulation. Kavanaugh's legislative perspective seems to be primarily focused on one key question: whether or not an agency like the EPA has the authority to pass environmental laws.

Via Scientific American, Kavanaugh wrote in one ruling, “However much we might sympathize or agree with EPA’s policy objectives, EPA may act only within the boundaries of its statutory authority."

During the oral arguments for the same ruling, Kavanaugh said, "Global warming isn't a blank check [for Obama to regulate carbon emissions."

To be fair, the Supreme Court wasn't that helpful for climate change initiatives prior to Kennedy's retirement, either. Just two years ago, the Court blocked the EPA's Clean Power Plan, which was an effort to cut carbon emissions drastically by 2030.

As Zach Corrigan, an attorney with Food & Water Watch, said to Scientific American, “Kennedy was no champion of environmental issues [either]. No one was looking at the Supreme Court to issue the next civil rights ruling on climate change.”

Although Kavanaugh has ruled against environmental regulation on several occasions, he has also ruled in favor of it, giving some people cause for hope. The New York Times notes that Kavanaugh actually voted to uphold an EPA decision to veto a West Virginia mining program, and in another instance he ruled in favor of the Natural Resources Defense Council after they criticized a federal law related to emissions from cement kilns.

“The task of dealing with global warming is urgent and important,” Kavanaugh wrote in one of his dissents to an environmental legislation, The New York Times reports. "As a court it is not our job to make policy choices."

Kavanaugh will face a series of private and public rounds of questioning from the Senate moving forward, which might further illustrate how he intends to approach environmental legislation as a Supreme Court Justice.