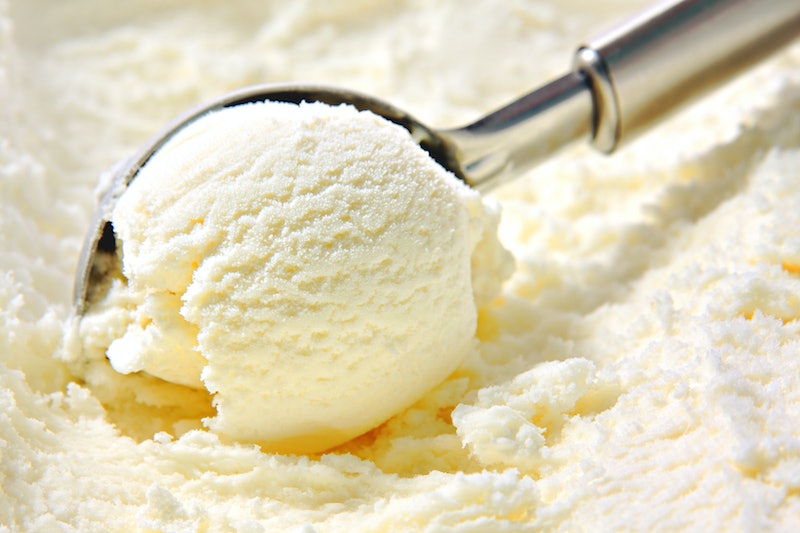 Calling all cheese-lovers, your days of only being able to enjoy your favorite snack on crackers or atop pizza are over. Davey's Ice Cream, a popular New York based creamery, is bringing two beloved types of cheese — brie and feta — to the world of soft serve, creating a literal brie and feta-flavored ice cream. We've seen some pretty questionable (and horrifying) ice cream flavors come into the spotlight this year, like Heinz tomato ketchup and mayonnaise. Though cheese-themed ice cream isn't something you see everyday, I have faith that it's probably delicious — and Davey's is known for its inventive flavors.

According to Delish, for one week only in the beginning of August, customers can get a scoop of Davey's Ice Cream's latest cheese-inspired creations. The limited edition flavors will be made with Président Cheese, a brand unsurprisingly known for its brie and feta offerings. According to Delish, the flavors have already been aptly named: "You Feta Believe It" is made with Davey's signature sweet ice cream and a blend of "Président Feta, Davey's homemade guava curd, and spiced pie crust crumble." Okay, don't judge me, but this sounds really good. I'm tempted to use this instead of regular feta the next time I make lasagna. "The Présidential Sweet" Brie flavor includes Davey's classic ice cream along with "Président Creamy Brie, an oven-roasted garlic swirl, and bits of brioche French toast."

Delish reports that the all-new Feta flavor will be up for grabs at Davey's East Village location, while the tasty-sounding Brie ice cream will be available at the Williamsburg, Brooklyn shop. A single scoop goes for $5.50, while a double is $7.68. Both of the new treats will be sold by the pint at Davey's Greenpoint, Brooklyn location. If you're craving one of Davey's new flavors but honestly don't feel like leaving the house, you can UberEats your order from East Village or Williamsburg. New Yorkers, you win again.

I feel Davey's cheese-flavored soft serve scoops will be a hit among customers. They offer something that a lot of ice cream flavors we see on shelves or at other ice cream parlors don't: a more mild tasting flavor. Often, I'll hear people complain about not being able to finish the cup of ice cream they just bought because it's "too rich" or "too sweet." Honestly, after a few scoops you just feel sugared-out — that's why the mild notes of brie and feta ice cream are here to save the day.

These aren't the only new flavors Davey's Ice Cream has released lately: two rosé-themed ice creams (and sorbets) hit stores for a limited time on July 12. The ice cream shop teamed up with hard cider company Angry Orchard to create Rosé CreamCider, available in ice cream and sorbet form, and Pine-Apple Hibiscus Rosé sorbet. You can also find dairy-free flavors at Davey's, like their Fresh Strawberry Ice Cream created with a coconut base.

Next time you're in the Big Apple, I think it's safe to say that you can't leave without getting a scoop or two from Davey's. Sometimes, life just calls for ice cream.