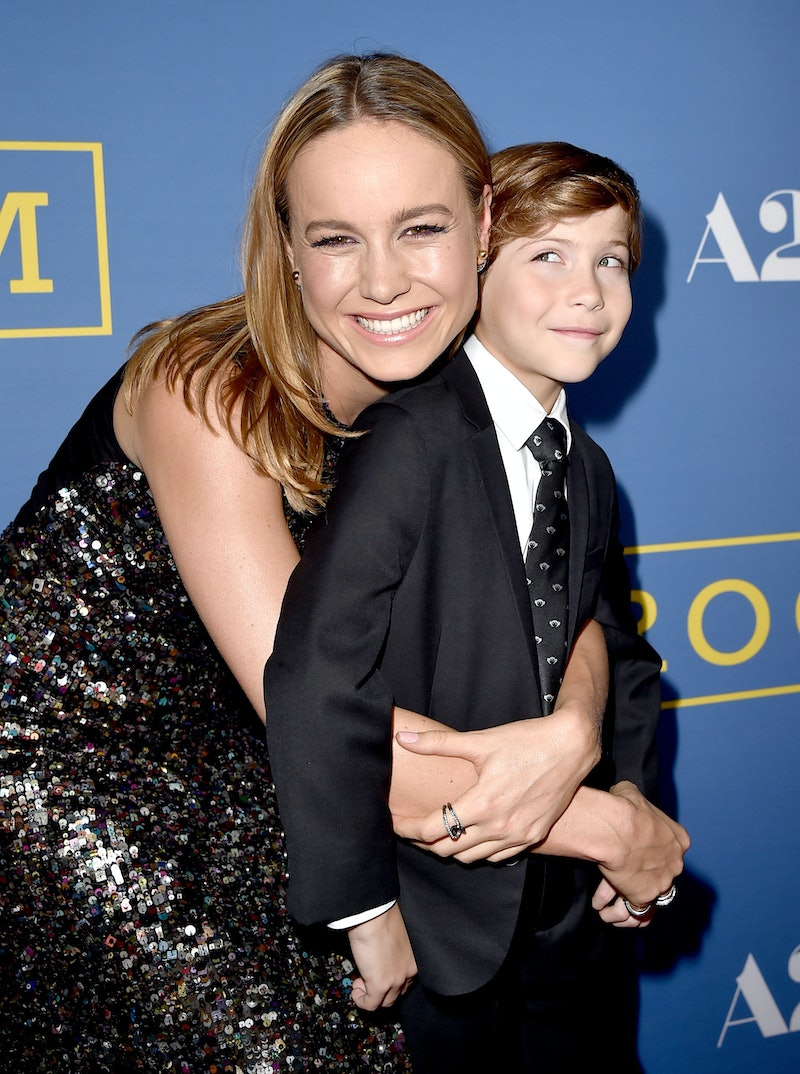 Room was arguably one of the best films of 2015. It featured a harrowing story about a woman who was kidnapped and held captive for seven years, bearing a child during that time. And the duo that made that movie so believable and emotionally captivating was comprised of actors Brie Larson Jacob Tremblay. Three years and many awards later (including Larson's Oscar win for Best Actress), Brie Larson and Jacob Tremblay had a Room reunion and it involved arm wrestling with Captain Marvel herself.

On Oct. 8, Larson and Tremblay hung out and commemorated it with a little game of arm wrestling. And while they didn't say why they were together (although it might have to do with Tremblay's birthday on Oct. 5), Tremblay let his followers on Instagram know that, despite putting up a good fight, he ultimately lost to Marvel's newest superhero. "Arm wrestling my old co-worker aka my bestie aka Captain Marvel," he wrote on Instagram and Twitter. "She won of course...I did give her all my strong ya know... 😉 💪#reunited @BrieLarson #sheismysuperhero." Tremblay is a known comic book lover, and if his social media is any indication, the young actor is pretty well-versed in all things Marvel and Star Wars, so he must be pretty psyched that one of his best friends is going to be the Captain Marvel.

Larson also shared the super cute picture on both of her social media accounts too. In the photo, a concentrated and flexing Larson stares down an adorable, smirking Tremblay as they see who can win in the arm match. "I love this kid," she simply wrote of the encounter. And if you saw Room, you know that the friendship between Larson and Tremblay is close, shown in the intense connection they had playing mother and son.

On Larson's Instagram story that night, she also posted about the outcome of their arm wrestling match. "We just arm wrestled," she said. "Jacob totally won, definitely won," as Larson said this, Tremblay agreed with an "I won, of course... I pulled out the table," which made Larson laugh (because it's so darn adorable). She went on to say: "He's gotten a lot stronger, he's got a lot more teeth." Then it was Tremblay's turn to die of laughter. Though it is true that he's grown some more grown-up teeth since Room premiered when he was nine-years-old.

In any interview they had together, the on-screen ma and son always showed the great bond they had, while being super comfortable with each other. In a sweet joint 2015 interview with Vanity Fair, for example, Larson described how the two of them bonded over Star Wars. "His mom said, 'Do you have any questions for Brie?' and he was like, 'Yeah I have two actually: What's your favorite color, what's your favorite animal, oh and do you like Star Wars?' And that was the beginning of it." She knew from the moment she saw him with a Star Wars figurine that they were gonna hit it off. And, it turns out, one hit movie and three years later, the two are still thick as thieves.

More like this
Revisit 1992’s 'A League Of Their Own Cast' Photos After The New TV Series
By Grace Wehniainen
17 Years Ago, 'Hannah Montana' Reportedly Almost Cast This 'Gossip Girl' Star
By Grace Wehniainen
Netflix Reveals First Look At Wednesday In The 'Addams Family' Spinoff Series
By Bustle Editors
Shakira Joked About An Early 2000s Video Of Her First Camera Phone Encounter
By Stephanie Topacio Long
Get Even More From Bustle — Sign Up For The Newsletter