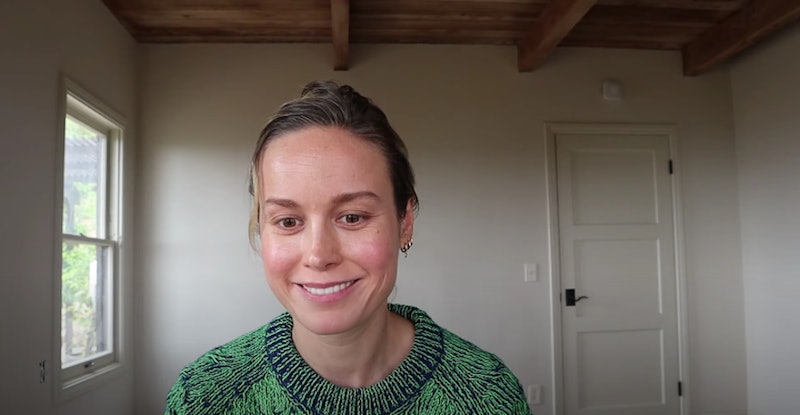 First she saved the world in Captain Marvel, and now Brie Larson has launched a YouTube Channel to further her activism in real life. On Thursday, July 7, the 30-year-old posted her first video to her new channel, which included mini-interviews with a host of popular YouTubers including Lilly Singh, Sean Evans, Justine Ezarik, and Michelle Khare. Over the course of the 21-minute video, she gets advice on how to navigate her new social media platform and use it for good while also sharing a more intimate look into her own life with her fans.

Larson kicked off her first official YouTube video, titled "So, I made a decision...," by professing her love for the platform. "YouTube has been a place where I have learned so much," she begins. "Whether it's been how to use my printer or it’s been watching how to be a considerate activist, this is the place to talk about things that are important and that matter." The actor then segued into a series of short chats with YouTube creators who offer her advice on everything from the technical side of running a channel to ideas about what content to make. The most common piece of wisdom: be authentic to yourself above all else.

"I think part of the success of YouTube is the raw and the realness... just try be as much as you can of you," Juanpa Zurita tells Larson near the end of the video. That advice is echoed by the rest of the creators as well, who suggest that she lean into the things that make her happy from her garden to crafting. Additionally, Larson's mom and grandmother make appearances to offer her their support and a bit of advice, too. ("Cooking's very popular on YouTube," her mom says.)

However, Larson made it clear that while she will be making lighthearted videos on her channel, she's committed to using her privilege and platform to spread anti-racist messages, advocate for women, and support the Black Lives Matter movement. She even ended her video by pointing viewers to the social media accounts of Black creators and activists — including Janet Mock, Tessa Thompson, and Aaron Philip.

"We will of course continue conversations like that [BLM] on this channel," Larson said, "But I also think it's important to recognize those people with boots on the ground doing this work in a profound way and you should hear it from them."

The Oscar-winner didn't mention when fans could expect her next video, but with over 46 thousand subscribers after only 3 hours, the world will be watching.