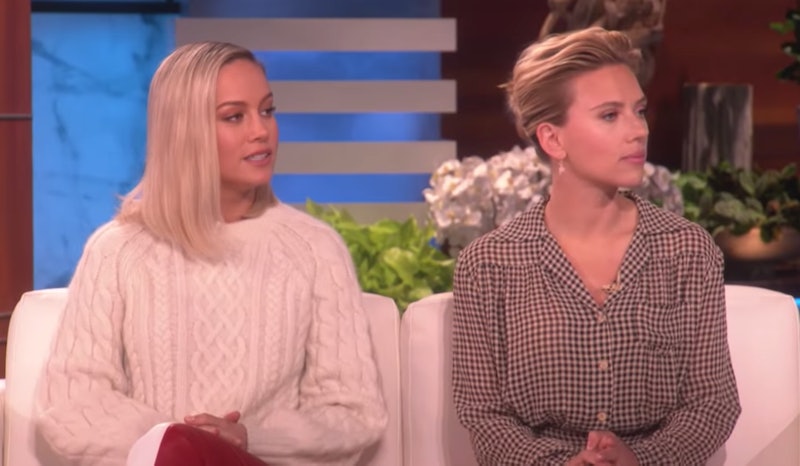 Way before starring as Captain Marvel and Black Widow in the Marvel franchise, Brie Larson and Scarlett Johansson's friendship formed on the set of another movie. During a Tuesday appearance on The Ellen DeGeneres Show, the Avengers: Endgame stars opened up about how they first met. Really, Joseph Gordon-Levitt is to thank for the superheroes joining forces both on and off the big screen.

After host Ellen DeGeneres inquired about their initial introduction, Larson made a groaning noise to which Johansson asked her, "You don't remember how we met?" The Oscar winner replied, "I do. I thought you didn't." Johansson didn't seem to believe her co-star and asked, "How did we meet?" Larson then showed her cards and answered, "At dinner?"

Yeah, the Captain Marvel star wasn't entirely sure about her response, but continued to say that they had dinner on New Year's Eve. Johansson immediately shut her down by declaring, "No!" Larson replied, "Yes, we did!" Johansson continued the debate by adding, "Clearly, it made an impression on me, but somebody else didn't care." The Black Widow actor then stated, "We worked together!"

So who was right? That would be Johansson. Larson admitted she was wrong and explained her mishap,

"Oh, my God! It's true! I didn't think about that because I basically felt like I was a glorified extra and you were Scarlett Johansson, so I was just like, 'Wow!'"

Fo those unaware, and as Johansson told DeGeneres, they filmed a few scenes together in Don Jon alongside Joseph Gordon-Levitt, who also wrote and directed the 2013 film. Johansson played Barbara Sugarman, the love interest for Gordon-Levitt's character, Jon. As for Larson, she played Jon's sister, Monica, who was constantly seen on her cellphone.

In the screenshot below from the movie, you can see one of the scenes Johansson and Larson filmed together. Larson's Monica is staring at her phone, while Johansson hugs the late Glenne Headly, who played Jon's mother, Angela.

Ever since that moment, the Marvel actors have been friends. Like Larson said, she really did attend one of Johansson's New Year's Eve parties. The Avengers: Infinity War actor threw a party and Larson came with one of their mutual friends. "And then we had like an eight-course dinner together," Larson told DeGeneres. Johansson joked, "Yeah, so you know, casual."

It's unclear exactly when they rang in the New Year together and which mutual friend Larson attended the lavish dinner with. Whatever the case, there's no denying these two make sense as friends. Not only do they both play badass superheroes in the Marvel universe, but they also know how to dress for a red carpet event. As you can see below, they wore similar accessories to the Endgame premiere on Monday.

Yes, you're seeing that right. Larson and Johansson both wore jewelry inspired by Thanos' Infinity Gauntlet. Their pieces were created by different designers, but, still, great minds think alike, right? They definitely have good taste and totally pulled off their looks.

It's nice to know that not only did Johansson and Larson first meet years ago, but that they have maintained a relationship. Plus, to be able to see them acting alongside one another as powerful Marvel superheroes makes their friendship even better.