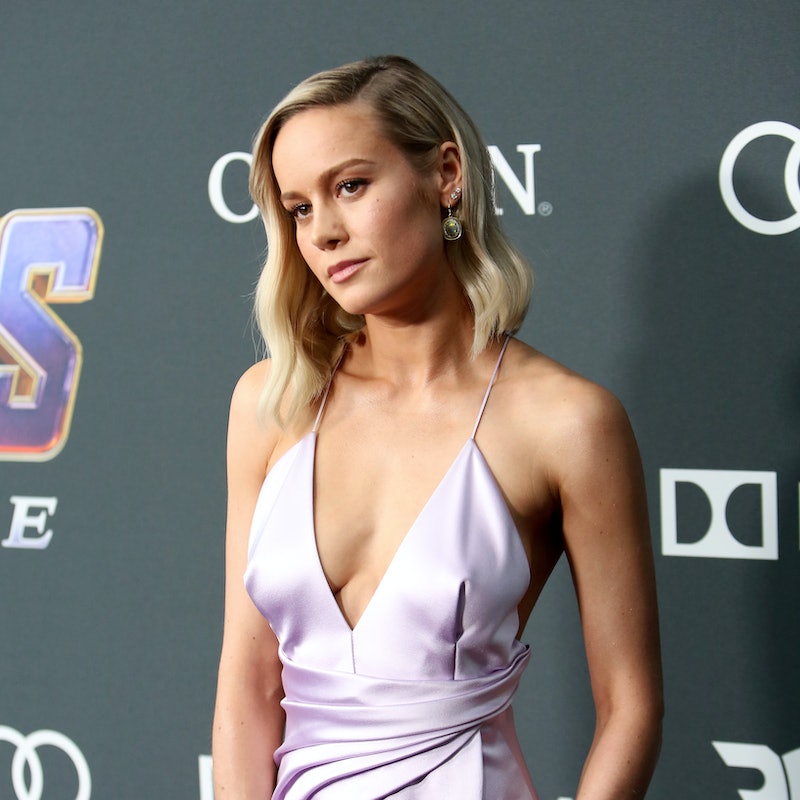 Avengers: Endgame is coming so soon, but fans basically got punched in the feels with Thanos' gauntlet when the stars of the film got together for the red carpet premiere on April 22. Brie Larson and Scarlet Johansson's Infinity Gauntlet jewelry, however, added a bit of whimsy and fun to the emotional night as the celebrities and their fans gathered to likely say goodbye to some of the series' most well-known faces.

While its highly unlikely you haven't heard, Avengers: Endgame premieres in theaters nationwide on April 26, but like most major motion pictures, a red carpet premiere precedes the release. On April 22, the Avengers stars gathered together one last time to celebrate the film and the journey they've been on since the first Avengers film premiered in 2012. The premiere is particularly emotional for fans as many believe theories that both Chris Evans' Captain America and Robert Downey Jr's Iron Man could die in the film, marking the last time the original group of Avengers would work together.

Thankfully, though, Scarlet Johansson and Brie Larson were on hand at the premiere to add a bit of levity thanks to their fashion choices. Both actors wore jewelry inspired by Thanos' Infinity Gauntlet, and they're definitely doing to defeat the Avengers: Endgame big bad.

For her Infinity Gauntlet look, Larson wore a ring on all five fingers with each of the gemstones in the rings corresponding to the Infinity Stones found in the gauntlet. Of course, there are six stones, so Larson completed the look with a cuff holding a gem that represents the Mind Stone.

As for Johansson, she took the look in a slightly different direction. While of course the actors' stones matched one another's, the Black Widow actor chose to connect the rings with a gold chain and wore the bejeweled Mind Stone in a pendant in the center of her hand.

As soon as the internet caught on to the pair's jewelry looks, well, Twitter basically blew up.

Larson posted a video to her Twitter with the caption, "Snapped," because well, if you've seen Avengers: Infinity War, you know that Thanos simply snapped his fingers and killed half the world. Well, Larson aka Captain Marvel snapped in a different way with her Infinity Gauntlet bracelet.

The consensus online? Both women totally crushed it on the red carpet.

While the end of the Marvel Cinematic Universe as its been known may be coming, Johansson and Larson found a way to lighten a bit of the anxiety some fans are having over who will survive the final film. Plus, there's still more than enough time left to relive the Avengers' journeys from the first Iron Man film all the way to Captain Marvel before Avengers: Endgame premieres on April 26.

Grab your collection of costume jewelry and make your own Infinity Gauntlet because Thanos is coming — and so is Avengers: Endgame.

More like this
Jennifer Lopez Wore A Naked Dress To The Shotgun Wedding Premiere
By Dominique Norman
All Of Doja Cat’s Wildest Paris Couture Week Looks
By Dominique Norman
Looking Back At Kylie Jenner's Best Fashion Week Looks
By Allie Fasanella
30 Of Kendall Jenner’s Best Runway Looks To Date
By Dominique Norman
Get Even More From Bustle — Sign Up For The Newsletter
From hair trends to relationship advice, our daily newsletter has everything you need to sound like a person who’s on TikTok, even if you aren’t.