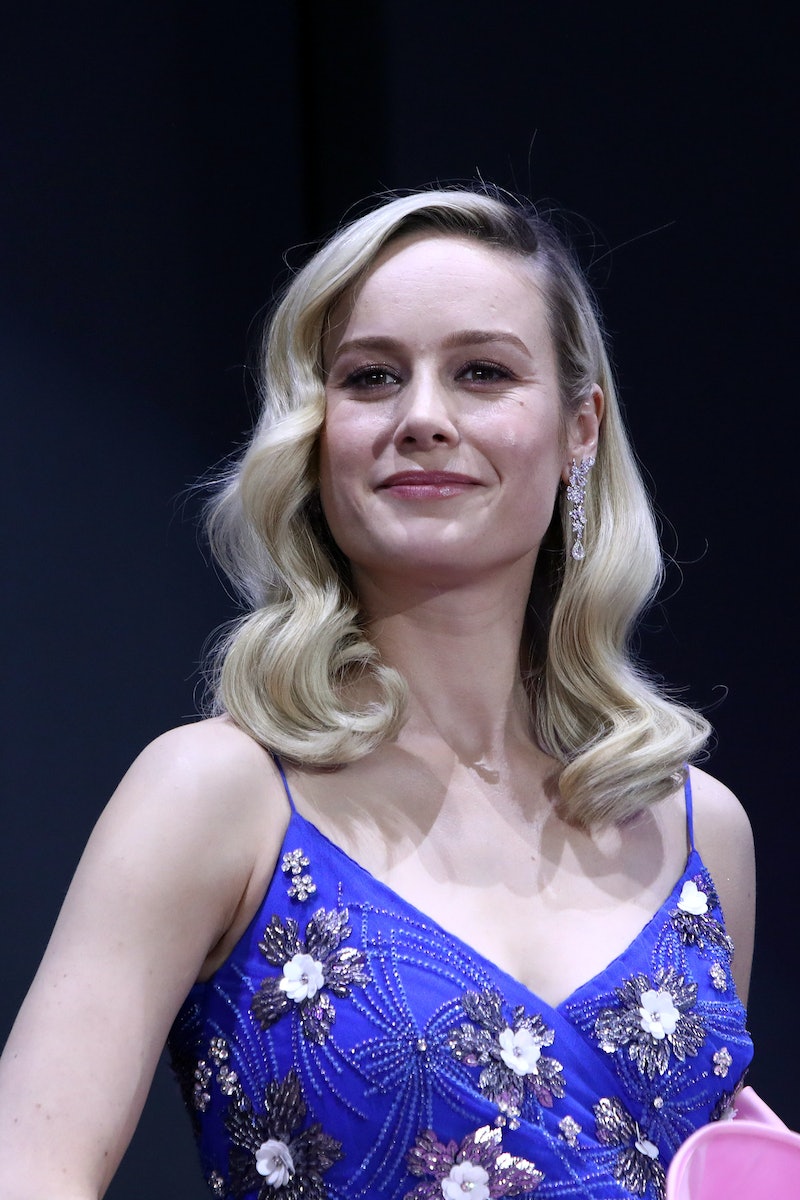 Not too long ago, people used to snicker at '80s fashion. The hair was too hair sprayed, the shoulders were too big, and the dresses were too maximalist. But that's all starting to change, and one actress is embracing the look full-on. On April 15, Brie Larson wore an '80s-inspired dress, and it's going to make you second-guess your opinion on ruffles and sequins.

Larson is currently on an Avengers: Endgame premiere tour, and has dished up plenty of bold fashion-forward looks these past few weeks. Larson plays Captain Marvel in the movie series, and she has worn everything from subtle Infinity Gauntlet jewelry on the premiere red carpet to a bespoke clutch with the word "captain" scrawled across it. But not all of her outfits are Marvel-themed, and when Larson embraces fashion just for fashion's sake, magic happens.

A case in point is Larson's outfit to the South Korea premiere. Larson showed up to the Seoul premiere wearing a Rodarte gown that looked like an '80s prom dress, just modern. The gown was royal blue and it was bedazzled with silver and white sequins across the bodice. The hem was asymmetrical, and was accented with a bold silk ruffle that dominated most of the skirt.

The piece was a total '80s revival, and the dress makes you understand why such bold frocks dominated the decade. Sometimes it's really fun to be a head-on maximalist, and that includes wearing more ruffles and sequins than you know what to do with.

The pink silk ruffle dress was from the Rodarte fall 2019 collection. According to WWD, the entire collection was inspired by musicals from the '30s, '70s, and '80s. The collection had details like two-piece sequined outfits, wide shoulders, tiers of ruffles, and exaggerated bows. You could definitely see the '80s influence in the Rodarte line. Interestingly enough, Larson was sitting front row at Rodarte's Fashion Week show when the collection was first revealed, taking photos with her Nikon. So maybe that's when inspiration struck for Larson to wear the dress.

While the dress is playful and makes you want to revisit the '80s in your own wardrobe, the gown also has subtle nods to Larson's Captain Marvel character. According to WWD, the deep blue color reference's Captain Marvel's uniform hue, and the hand-beaded star bursts resemble's the Captain's star motif.

This isn't the first time that Larson showed up to a Marvel red carpet wearing Rodarte. In Feb., for Captain Marvel's Los Angeles premiere, Larson wore a custom made gown by Rodarte. The dress was made from blush-toned tulle, and it had crystal starbursts beaded across its whole length. According to Vogue, the star-studded dress was meant to reference Captain Marvel's "gift for cosmic awareness."

Those who are Marvel fans know that Captain Marvel has cosmic-related powers. She can tap into energy of "white holes" to use stellar energies, and she can both absorb and blast out energy.

From '80s prom dresses to starburst gowns, Larson is killing it on the Marvel red carpet.