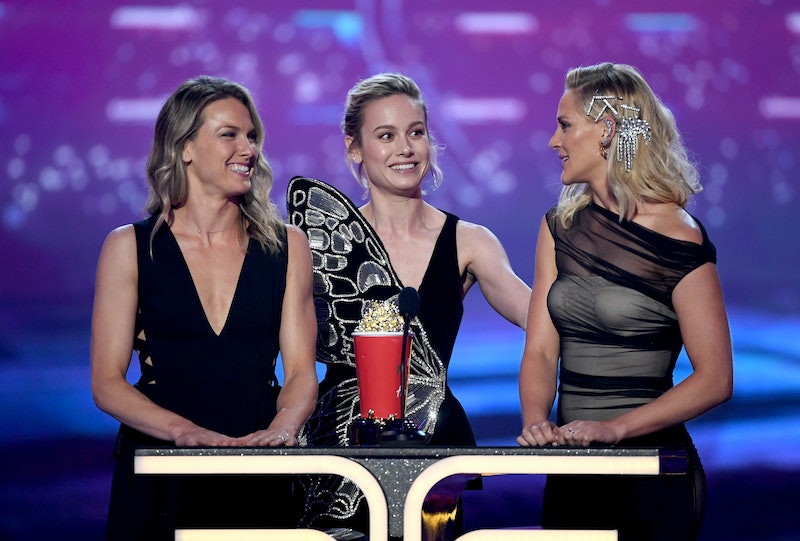 Brie Larson continues to live up to her superhero status. After she won the award for Best Fight as Captain Marvel, Larson brought her stunt doubles onstage at the MTV Movie & TV Awards. Joanna Bennett and Renae Moneymaker joined the Oscar winner to accept the honor, where they beat out the likes of Ronda Rousey and Ruth Bader Ginsburg. (Did we mention this awards show is wild?)

When Larson brought Bennett (who, according to IMDB, did stunts Taylor Swift in the "Bad Blood" music video) and Moneymaker (who frequently performs stunts for Jennifer Lawrence) it was a super empowering moment. Most of the time, the onscreen counterparts to stunt doubles get all the glory. But by shedding a light on the fighting technique that went into this award-winning moment, both Bennett and Moneymaker got to shine.

After Kumail Nanjiani and Dave Bautista presented the award to Larson, aka Carol Davers, she exclaimed, "This is so cool! First and foremost, thank you to MTV, and to the fans. Thank you for voting for this film that we're so proud of." She then went on to spotlight her stunt doubles in an inspiring way.

"But I wanted to take this moment to really say thank you to these two women who are standing here beside me — these are the women who trained me and were also the stunt doubles for Captain America. I could not have made this film without them. They are really the base line of who she is. They're the living embodiment of Captain Marvel."

"It was such an honor to work on this film and be part of bringing such a strong female character to life and to be able to do it together was just such a special experience for all of us," Bennett said.

Moneymaker chimed in, "Joanna and I actually grew up together. As young girls, [we] wanted to be just like Lara Croft and G.I. Jane, so it's a real honor to be a part of this character and hopefully pass along some of that inspiration and strength that those iconic women brought to us."

Both women expressed gratitude to Larson for the "rare acknowledgement," though, clearly, the kudos should be given more often. However, Larson brought a theme of girl power all evening long. During the show, she could be seen interacting with fellow Marvel co-star Tessa Thompson. Can we get a Valkyrie and Captain Marvel spinoff, now? Please and thank you.

Although Larson may have lost out the Best Hero award to Robert Downey Jr. for Iron Man/Tony Stark in Avengers: Endgame, it was still a real moment to see the three distinct parts of Captain Marvel/Carol Davers unite on one stage to pay homage. Sandra Bullock also gave a shout-out to female heroes such as Wonder Woman and Captain Marvel in her speech for Most Frightened Performance.

Even the most avid Marvel fans can lose sight of the behind-the-scenes power it takes to create Avengers-level action sequences. With speeches like Larson, Bennett, and Moneymaker's, the world gets one step closer to recognizing that talent.