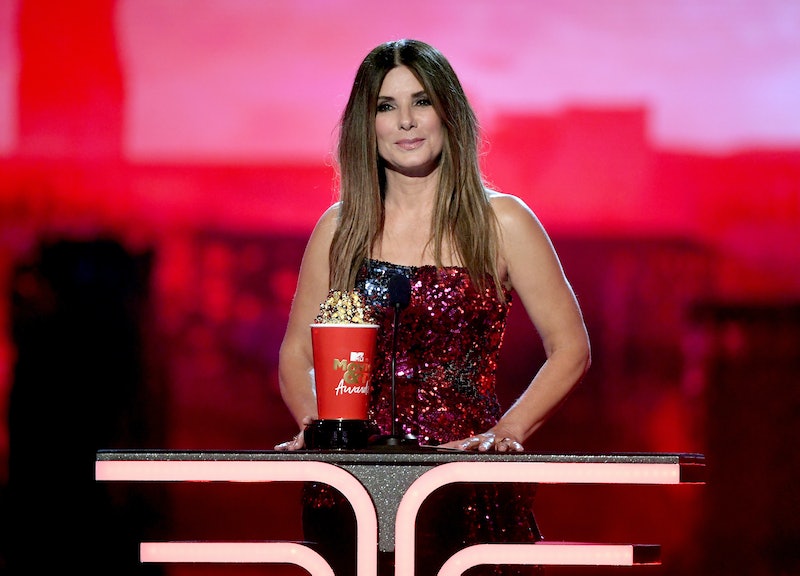 When you think about the Netflix horror smash Bird Box, being a parent might not be the first image that comes to mind? (Ahem, blindfolded trip down the river.) But when Sandra Bullock won Most Frightened Performance at the MTV Movie & TV Awards, her speech was all about motherhood. The Oscar winner took time while accepting her award to explain why she decided to join the film in the first place and what it meant to her. Spoiler alert: it goes way deeper than a jump scare.

Bullock first thanked Netflix for allowing her to make "an educational video on the horrors of parenting." She explained further by adding:

"Seriously, I made Bird Box because my children asked me why I never made anything for them. So, when Bird Box crossed my path, I knew this was a story I needed to make because it was about family."

The Blind Side star continued that though her kids may not see the film for a while (because of obvious trauma reasons), that it was weirdly a love letter to her children, Louis, 9 and Laila, 7. Bullock explained:

"And when I finished the film, I went to my babies and I said, 'Here. Mommy made this for you. And even though you can't see it until you're 21 because apparently a movie about being a mommy is a horror film, you will know when you see it that there isn't anything I wouldn't do for you. I wanted you to see what being a family looks like.'"

Bullock proceeded to make a totally impassioned, unexpected point about the power of family. The performer, who won MTV's Generation Award in 2010, adopted both of her kids and touchingly said, "Family is what you fight for, family is what you protect. What you see in this film is exactly what Mommy would do for you." And if you've seen this movie through half-covered eyes, that's quite the statement.

Several fans were moved by Bullock's message, where she proclaimed her kids were her "first thought in the morning, last thought at night," before adding that she would "move mountains to make sure you are safe." It was definitely deep considering the guilty pleasure nature of Bird Box. But people were here for it on Twitter.

Bullock also revealed that her son was in the audience, and might have wanted his mom to star in a superhero film rather than a horror flick. So, she gave a shoutout to caped stars including Gal Gadot (Wonder Woman) and Brie Larson (Captain Marvel). "I'm sure he will notice that they are women just like his momma," Bullock added. However, some viewers pointed out that Bullock has some pretty superhero-like qualities.

Plus, what host Zachary Levi referred to as the "power quintet" that was Bullock, Tessa Thompson, Lizzo, Melissa McCarthy, and Elisabeth Moss would be a killer Avengers assembly and you can't convince us otherwise.

So, will Sandy's speech on the hidden power of Bird Box impact your next viewing of the thriller? Or does it just want to make you watch it with your mom next time? If it's both or neither, Bullock's speech will certainly be remembered.