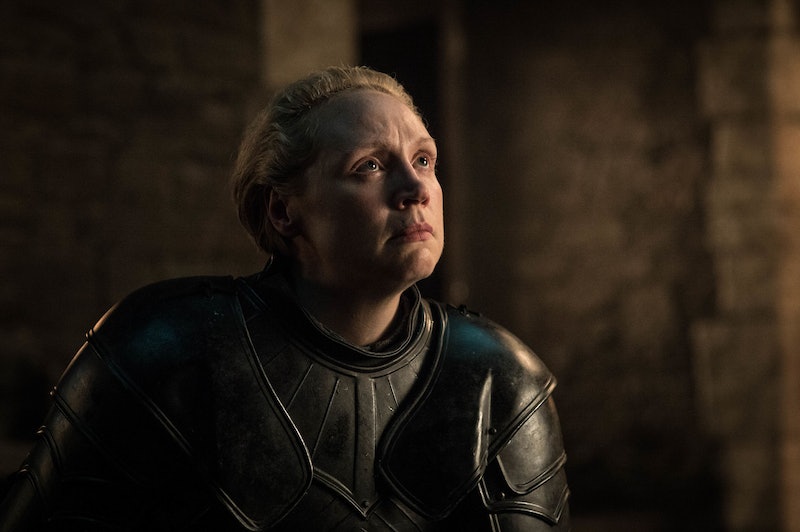 Brienne of Tarth has proven herself to be a noble warrior over the course of the war for the Iron Throne, and now, she finally has the title that she deserves. Jaime Lannister knighted Brienne on Game of Thrones, just in time for the battle against the Night King in the final season. For her entire life, Brienne (Gwendoline Christie) has wanted to be taken seriously as a warrior, and her reputation clearly managed to precede her to Winterfell, as the knights drank together around the fire the night before fighting the White Walkers.

But when Brienne pointed out that she was not a knight — women cannot be knighted, she told Tormund, because of "tradition" — it was Jaime Lannister (Nikolaj Coster-Waldau) who stepped up to ensure that she was honored for the noble and loyal fighter that she is. "Any knight can make another knight," he said, before having Brienne step forward and earn the title of Ser Brienne of Tarth.

And while Tormund's excited reaction was a pretty good indication of how fans felt watching the fiercest female character on the show receive her due, once they saw the tears in Brienne's eyes, they couldn't help but get emotional as well:

In addition to helping Brienne earn her rightful title as as knight, the scene was especially emotional considering Jaime and Brienne's long and fraught history. When she was first tasked with delivering him to Catelyn Stark, the pair were openly contemptuous of each other, but soon their relationship grew to a place of caring and mutual respect — not that either of them would ever admit it.

And though Brienne was the one who defended Jaime to Dany (Emilia Clarke) and Sansa (Sophie Turner) when he first arrived in Winterfell, it was the former Kingslayer who seemed most determined to heal their relationship. At one point, he even told Brienne that he would be honored to fight under her command, in essence, telling her that he respects her ability as a warrior and a leader. Jaime used to be the leader of the King's Guard and is one of the most famous (or infamous, depending on who's talking about him) knights in all of the Seven Kingdoms. For him to declare that he would fight under Brienne, and not beside her, shows that he literally trusts her with his life, and that he is willing to let her take the lead as the superior fighter.

Even if Brienne didn't seem to react well to that statement — she did note that she's used to Jaime insulting her, hinting that she's likely uncomfortable with their new dynamic — his decision to make her a knight on the eve of the most important battle in the North is an even more overt demonstration of his faith in her skill, and his respect for her as a fighter and as a person.

Way back in August, Coster-Waldau teased that Jaime "might find the love of his life," when he arrives at Winterfell, which led many to believe that he was confirming that he and Jaime would end up together. While the pair haven't made any major professions to one another just yet, Jaime knighting Brienne is perhaps one of the most romantic gestures that one could make towards the new Knight of Tarth. But even if their emotional, tension-filled moment doesn't help pave the way for romance, at least fans can take comfort in the fact that Ser Brienne has finally earned the respect she deserves as the first female knight in Westeros.