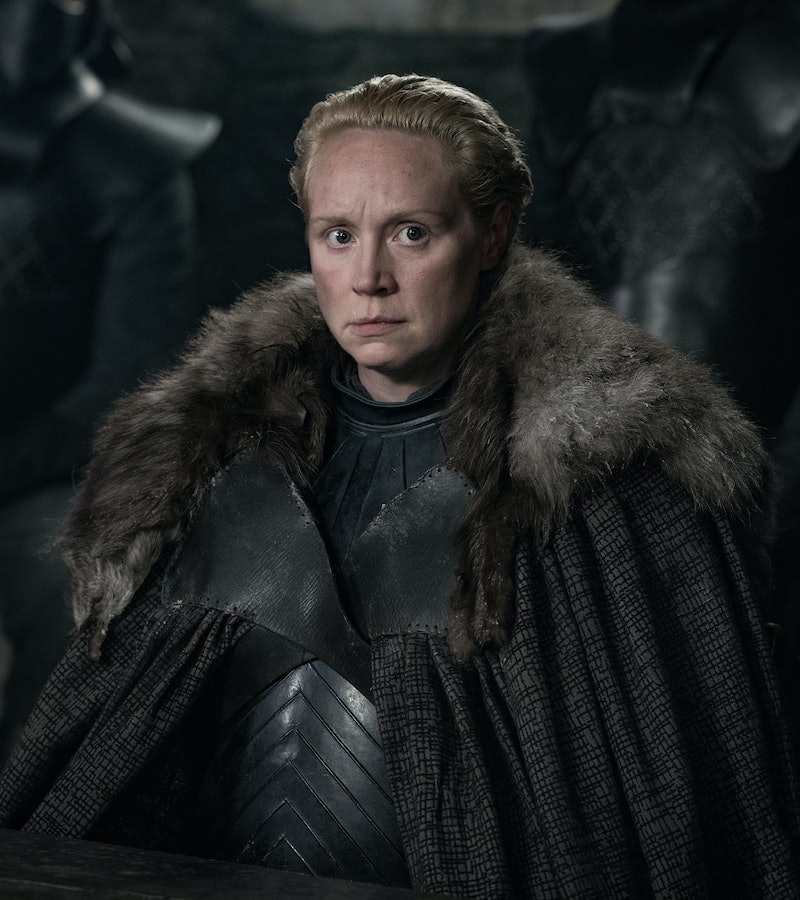 When it comes time to battle the Night King, Brienne of Tarth will be right in the thick of things this season. In a new interview with Entertainment Weekly, Gwendoline Christie revealed that Brienne's Game of Thrones Season 8 role is bigger than ever before. Sadly, that's not a guarantee the beloved warrior will make it out of the series alive. But it does mean she'll be doing her share of butt-kicking in battle scenes, and coming into her own as a person who has long struggled with self-confidence when she's not holding a sword.

Christie explained, "This season we see more of Brienne than ever before. I'm more involved this season and I'm delighted the character has been learning from everyone she's been around. There's been a timidness and a tense vulnerability that was the opposite of her physical strength. It's been interesting to watch her embrace her intellect and humor and step forward in life and make decisions."

It sounds like Brienne is finally embracing the fact that she's awesome — which is something fans have known all along. Even better, now that the stakes are higher than ever before, the Tarth warrior is no longer going to be judged based on her gender. "I think this is a season where Brienne's gender is really no longer an issue," the actor said. "She's treated as an equal by all and that’s very pleasing."

That's a big step forward for Brienne, who has spent the past seven seasons being underestimated by the people around her based on the fact that she's a woman. With the Night King's army descending on Winterfell, it sounds like she'll be fighting side by side with the likes of Jaime Lannister, Daenerys' army, and every other person in the North who can hold a sword. The war between the living and the dead is beginning to sound like a true equalizer for the men and women of Westeros. It's also going to be a massive, and almost certainly deadly, event.

As the Season 8 trailer revealed, Brienne is going to be on the front lines of the coming battle at Winterfell. And make no mistake, the confrontation is going to be huge. Christie told EW,

"We get to see Brienne going full throttle doing what we all love to watch her do. It's the crew I feel for. They're the ones who are truly the face of brutal suffering when it comes to the relentlessness of the schedule and I deeply admire them for that. But the storyline is so great. I have the skills now where when I’m told there’s going to be a fight and it’s nine moves with 30 men running at you that I can do it. And the Winterfell set is huge, it’s enormous. I've worked on big things and this is enormous."

While nothing would beat knowing that Brienne makes it out of the series alive. Christie's hints suggest that for however long she's onscreen in Season 8, Brienne will have a swan song worthy of the fan favorite character.

More like this
'GoT' Star Emilia Clarke Says She "Just Can't" Watch 'House Of The Dragon'
By Brad Witter
15 Photos Of 'The Last Of Us' Star Pedro Pascal That Cement His Zaddy Status
By Radhika Menon
Netflix Shut Down 'Bridgerton' S3 Rumours About A “Very Dark” Storyline
By Bustle
This 'Gossip Girl' Wardrobe Error Has Gone Viral On TikTok
By Alyssa Lapid
Get Even More From Bustle — Sign Up For The Newsletter
From hair trends to relationship advice, our daily newsletter has everything you need to sound like a person who’s on TikTok, even if you aren’t.