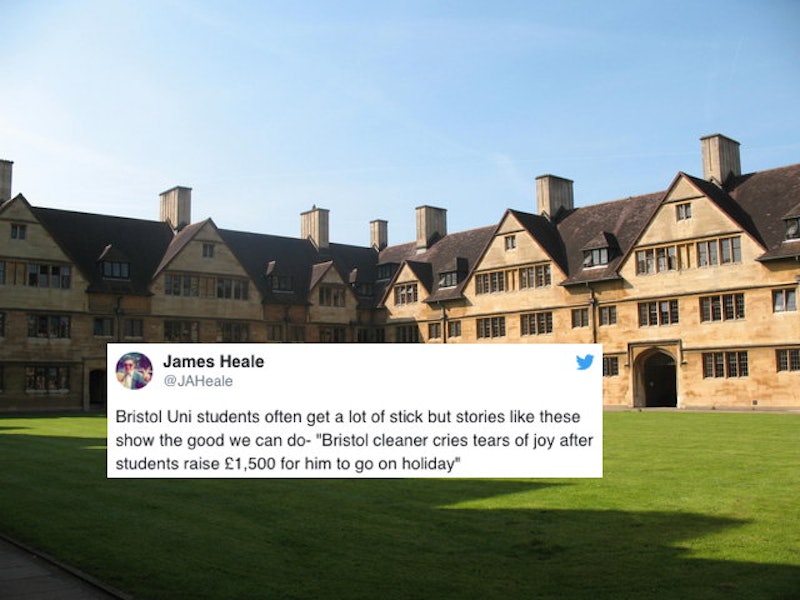 In this age of constant dark news, bright spots can feel few and far between. But there are still heartwarming moments of the good in humanity out there, including the fact that a bunch of University of Bristol students recently got together and crowdfunded £1,500 (a little less than $2,000 USD) four campus custodian Herman Gordon. The money is being used to send Gordon, who is variously described as the "jolliest" and "most loved" cleaner on the University of Bristol campus, and his wife on a trip to visit family in Jamaica, and the entirety of British Twitter can't stop crying.

Gordon's story is going viral after a video of him being surprised with the money was posted online. According to the BBC's Newsbeat, 230 supporters chipped in to a JustGiving page 20-year-old Bristol University medical student Hadi Al-Zubaidi started for him. In the JustGiving page's description, Al-Zubaidi called Gordon "the epitome of happiness," and in a note that accompanied the money gifted to Gordon, students collectively thanked him for his "positive energy" over the 12 years he's been working at Bristol University.

The students' note can be seen in the video of Gordon receiving the money. They wrote:

On behalf of the students at Bristol, we would like to thank you for all the positive energy you have given to us throughout the years. You have brightened many of our days and we want you to know that we love and appreciate you. We have come together to give you a special gift as our way of saying thank you. Have a lovely summer!

If you're not already crying at that sweet note (hello, it's me), Gordon's response will absolutely floor you. In the video posted to Twitter, Gordon can be seen shaking his head and wiping away tears as he opens the envelope from the students. "God bless every one of you," he says after bringing in the person filming the video for a heartfelt embrace.

Gordon told Newsbeat that "it's important to keep away 'negative vibes.'"

Al-Zubaidi told Newsbeat that the JustGiving campaign he created for Gordon reached its goal within five days. "It just went crazy," he told Newsbeat. "I myself was shocked that he was this famous!" He added, "[Gordon] spends the whole time being nice to everybody, it's about time we were nice to him."

Bristol University is a research university known for its medical departments, including Bristol Dental School, the Elizabeth Blackwell Institute for Health Research, the Centre for Health Sciences Education, and Bristol Veterinary School. According to the university's student numbers and demographics page, the university has around 25,000 students per year.

Per Newsbeat, the original idea for a fundraiser came from a May 19 Facebook post on the Bristruths page, a "confessions page" for University of Bristol students where comments are submitted anonymously through Google Forms. The original anonymous poster wrote that Gordon was "the jolliest man I've ever met, he makes me smile even when I'm the deepest depths of revision or trying to be." According to Newsbeat, Al-Zubaidi then sent an anonymous submission to the Facebook page, saying he was thinking of starting a crowdfunding campaign for Gordon, and asking if anyone would donate. Gordon and his wife reportedly have not been to visit Jamaica in over four years, according to the Bristol Post.

An anonymous message on Bristruths wrote on May 26, "I hope Herman has a blast in Jamaica and sends us a postcard."