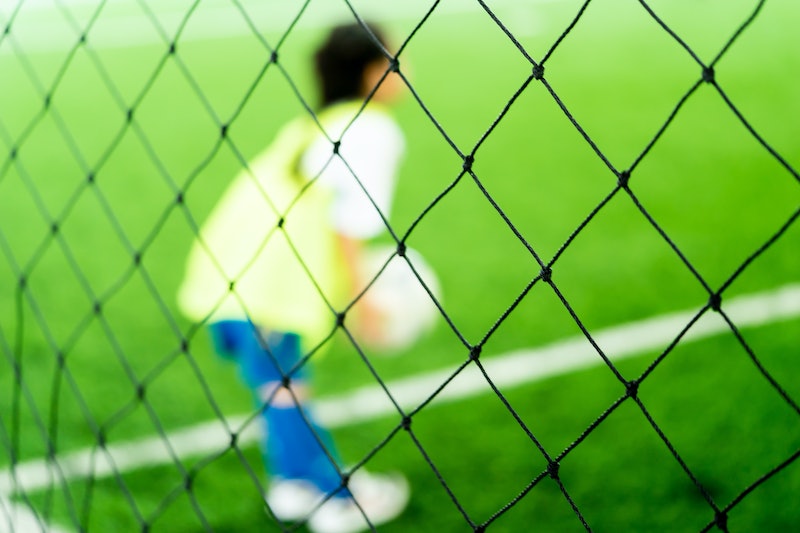 “Who wants to be a lion and who wants to be a dinosaur?” The coach for my daughters' football team (15 children aged between two to four) is dividing up players during a Sunday morning session. One of my twins, just turned three, shouts out “Triceratops!” That's what she wants to be. She goes on to tell me me how much she loves Triceratops. And football.

My twin girls have been coming to this football class for about six months, and they're really enjoying it. However, they make up two out of only three girls in this group, and they are the only children with mixed heritage. They are Indian-Scottish and their complexions and dark hair and eyes stand in stark contrast to all the other children there. I am, of course, the only brown parent in the group.

My girls' football group is one that has many centres around the country. However, when I first watched its promotional video online, I had to think about whether it was really the right programme for my children. The four-minute montage featured very few girls, let alone any brown faces. Would they feel comfortable in that setting, and would they be accepted?

Yet, as we drive by the local parks on Sunday morning, where numerous football matches are being played, I begin to notice that the lack of diversity in my daughters' football group is not an anomaly. Looking out, I see very few children from Asian communities there, and even fewer girls from those communities.

Women’s football has recently had an uptick in popularity, with more television coverage, more sponsorship, and more attendees at their matches. However, as the Lionesses prepare for the 2019 World Cup, I cannot fail to notice that there is not a single British Asian woman in the squad. And, according to the FA Women In Football website, more than 100,000 women and girls play affiliated club football in over 5,900 teams at the grassroots level. Of those 100,000+, 26 percent are from the BAME community.

In Asian families, especially among British Indian and Pakistani communities, cricket remains the sport of choice. It's what their parents and grandparents grew up listening to and watching, and it still holds huge significance today. The India-Pakistan World Cup Cricket match in June 2019 sold out within 48 hours. Although, from my experience, more and more Indian and Pakistani families are now choosing to attend football matches, racism among spectators remains rife. Racist chants (some of which have been directed at children as young as seven years old) are not uncommon. On top of that, players have reported racist abuse and microaggressions taking place in locker rooms, often disguised as banter and jokes.

And the racism reaches the organisational level too. Research and first-hand experiences have shown that scouts overlook Asian players, with stereotypes around physical inferiority and social customs about contact sports still persisting. South Asian women in particular are stereotyped as meek and mild-mannered with not enough aggression to play a competitive sport.

While writing this article, I tried to contact several football clubs and FA Women’s League to find out more about their inclusivity efforts and to get the latest stats on how many British Asian women were playing this sport. None of them could provide me with any specific data. It's just not something that is being recorded. Instead, British Asian women are placed under the general category of BAME initiatives, even though the cultural and social contexts among these communities vary considerably. Researchers studying football tell me that are very few statistics on British Asians in football. There is a Wikipedia page, but on clicking it, I found it exclusively about British Asian men in football. None exists for British Asian women.

Role models matter. My girls are only three years old, and while they may grow up and find they are disinterested in football and don't want to pursue it, I don't want that to be because they are led to believe that the sport is not open to them. How can my girls even dream of playing for England one day when they do not see anyone who looks like them on the football field, in media or on television? It's time to start breaking down stereotypes and implicit biases and let brown girls know they can bend it like Beckham if they really want to.