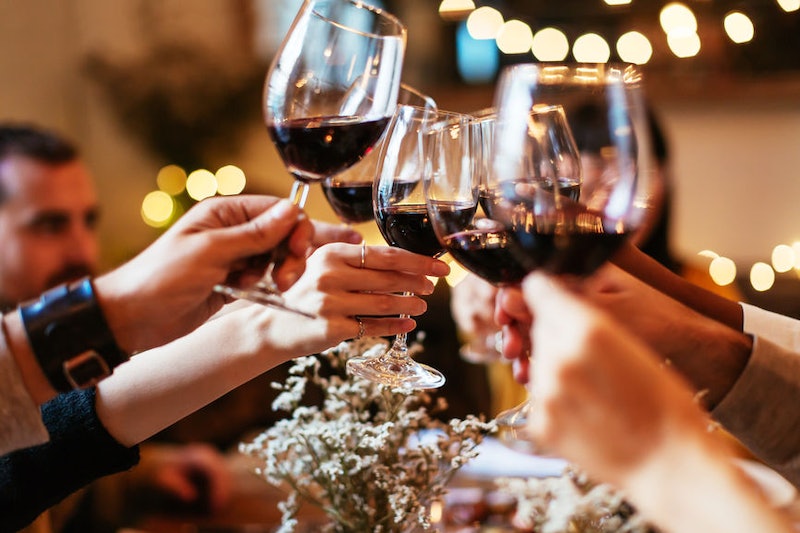 BONNINSTUDIO/Stocksy
By Emily Dixon
May 19, 2019

Here's some news that will shock not a single Brit: according to a new survey of almost 125,000 people across 36 countries, British people get drunk the most frequently. The Global Drug Survey found that British participants reported getting drunk an average of 51 times in the last 12 months, compared to a global average of 33 times.

In fact, English-speaking countries dominated the top five, with people in the USA reporting that they got drunk 50 times over the last year, Canadians 48 times, and Australians 47 times. (Denmark rounded out the top five with 42 times.) Respondents in South America got drunk the lowest number of times over the last year: 24 times for people in Argentina, 22 in Colombia, and 16 in Chile. Germany and Portugal also appeared in the bottom five, with 21 and 20 times respectively.

38 percent of the total survey respondents who consumed alcohol over the last year said they wanted to drink less, while they regretted 20 percent of the occasions they got drunk.

The Global Drug Survey has some distinct limitations, however: 87 percent of the respondents were white, while people in 25 European countries were surveyed, compared to only one each in Africa and Asia (South Africa and India). 57 percent of participants were aged 25 and under, while only 19 percent were 35 and over.

As the Guardian notes, the NHS currently advises regularly drinking no more than 14 units of alcohol per week, and does not acknowledge any safe level of drinking. Professor Adam Winstock, the survey's founder, told the newspaper, "We get told too much is bad, and it is, but current guidelines fail to accept the pleasure of intoxication and give little guide on the difference between being a little drunk and a lot drunk, and doing it three to four times a year versus weekly. We need to have that conversation."

"In the UK we don’t tend to do moderation; we end up getting drunk as the point of the evening," Winstock continued. "Until culture changes and we become more European and moderate in our drinking, we might have to bite the bullet and think about how to advise people to get drunk drinking less."

Meanwhile, a recent study published in the BMJ found that one in five people over 16 in England were harmed due to others drinking alcohol over the past year. Almost one in 20 people were physically hurt, threatened with violence, or pressured into sexual activity, the Guardian reported. The most common ways people experienced harm were less severe: 8 percent said they were kept awake by someone who had been drinking, while 7 percent reported feeling uncomfortable with someone's behaviour at a social event.

Clinical psychologist Bob Patton, from the University of Surrey, told the newspaper, "We know that alcohol is associated with a range of physical and psychological harms to the drinker themselves, but this survey shows that such harm is not just limited to the individual."

Worried about your own drinking? Take a look at advice from the NHS or charity Drinkaware on what to do next.