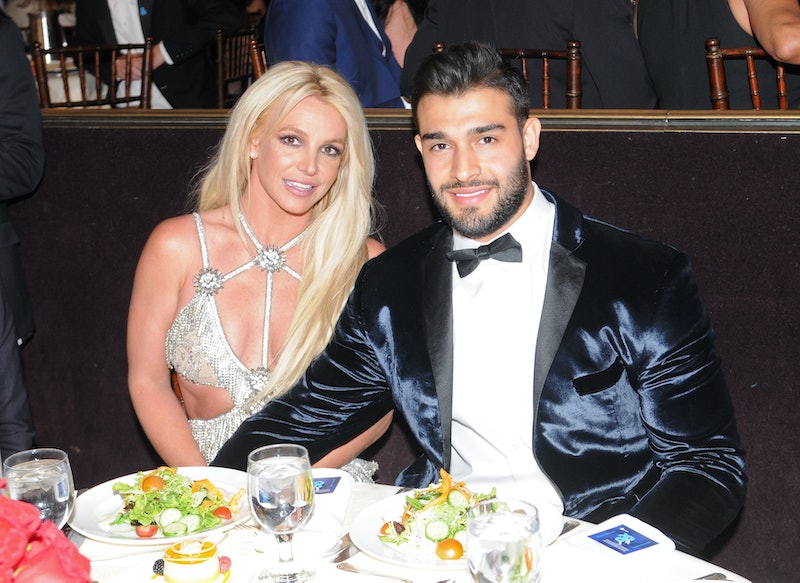 When you're going through a tough time, it's always nice to know that your loved ones have your back. In the wake of recent reports that she's putting her mental health first, Britney Spears' boyfriend Sam Asghari and sister Jamie Lynn Spears posted supportive messages for the singer on social media, according to E! News. (Bustle reached out to Spears' reps for comment on the reports about seeking treatment, but did not receive an immediate response.)

On Wednesday, April 3, TMZ reported that Spears had been admitted to a mental health facility, due to ongoing emotional stress resulting from dealing with her father's life-threatening illness. An unnamed source for the outlet claimed that the singer "checked herself into the facility about a week ago where she will live for 30 days," and now, those close to her are seemingly rallying in support.

Shortly before TMZ's story broke, Spears shared a quote on Instagram that was all about self-care. It read, "Fall in love with taking care of yourself, mind, body, and spirt." In the caption of the post, she wrote, "We all need to take time for a little 'me time,'" followed by a smiley face.

In response to Spears' message, her boyfriend, Asghari, re-posted the quote on his Instagram page and also shared some positivity of his own. "It isn't weakness, it's a sign of absolute strength," he wrote. "People should be inspired by this, at least I am."

Spears' younger sister, Jamie Lynn, dedicated an Instagram post to her yesterday as well. While the nature of Asghari's seemingly alluded to the reports about her seeking treatment for mental health, Jamie Lynn took a different approach.

The 28-year-old shared *the* cutest throwback photo of her and her big sis, and it will seriously make your heart so warm. The pic shows Jamie Lynn stepping off the school bus, basically beaming. Just one step behind her is a young Britney, playfully sticking her tongue out at the camera.

"Yup, she rode the bus home with me after my first day of school, cuz she’s the fn best," Jamie Lynn captioned the shot, followed by #WCW, the dancing twins emoji and a double-heart emoji. So sweet on so many levels.

Earlier this year, Spears announced that she'd be taking an indefinite hiatus from her new Britney: Domination residency shows in Las Vegas. In a lengthy post on Instagram, the singer explained that, while she had been so excited about performing, "it’s important to always put your family first… and that’s the decision I had to make."

She went on to reveal that her father, Jamie, had come close to death after being hospitalized some time last year. "We’re all so grateful that he came out of it alive, but he still has a long road ahead of him," she wrote in the post. "I had to make the difficult decision to put my full focus and energy on my family at this time."

Taking care of a sick relative can definitely weigh on you, so it'd be easy to understand if that's why Spears decided to seek treatment. Whether or not the rumors are true remains to be seen, but it's nice to know that her loved ones are looking out for her regardless.