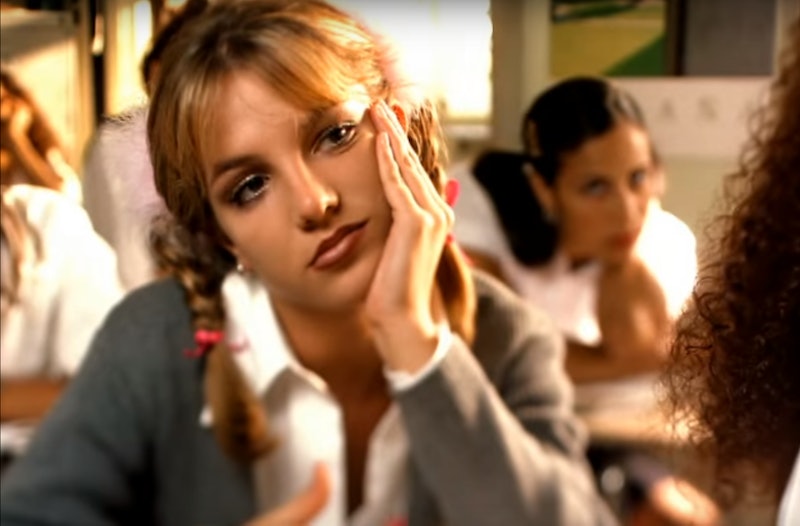 Do you remember the first time you heard "Oh baby, baby, how was I supposed to know"? Or watched the now-iconic video that has inspired many Halloween costumes and set the trend for future video and pop music? Odds are, if you're a 90's Kid, it was the epitome of your childhood, and it still fills you with insane joy whenever it comes on at a throwback party, or someone puts it on a pregame playlist. Now on the 20th anniversary of Britney Spears' career-making song, a new interview sheds some light on the making of both the song and the video.

"...Baby One More Time" was written by Max Martin, who Spears calls a "genius." In a new interview with The Guardian, Spears revealed how she feels about her first big hit two decades later. She explained,

"It all just came together and felt right. In my opinion Max is the greatest songwriter of all time."

He originally titled the song "Hit Me Baby (One More Time)" and it was offered to TLC. They rejected it, interpreting a domestic violence undertone to the song and with Tionne "T-Boz" Watkins saying in 2013 that it didn't sound like them, according to The Guardian. After being sent to Swedish singer, Robyn, and Simon Cowell's UK band, Five, it fell into the hands of Britney Spears herself.

Right from the start it was clear that Spears understood what the song was actually about. She told The Guardian, "The whole song is about that stress that we all go through as teens. I knew it was a great song. It was different and I loved it, [but] I don't think you can anticipate how a song is going to be received." Which is true. At that point, Spears wasn't a household name yet, and she also hadn't released her first album. Cowell, after hearing that "...Baby One More Time" was going to Spears, reportedly scoffed, saying, "No one can be successful with a name like that." But she proved them all wrong.

"...Baby One More Time" went on to do big things, if it wasn't obvious by how many people love the song to this day, 20 years later. It went to number one of the charts in all countries it charted in, was the fifth biggest song on Billboard's Hot 100 of 1999, and it's one the best-selling singles by a female artist ever. It didn't need to be said again, but it's a one of the best bangers of all time.

And on top of the song, the video was another success, and skyrocketed Spears' career even higher. Directed by Nigel Dick, the actual concept of a day-dreaming schoolgirl was all Spears' plan. "I wrote an idea which sucked, so the label put me back on the phone with Britney who told me she wanted to make a video where she was stuck in a classroom thinking about boys and we took it from there," he said, according to The Guardian. And that schoolgirl-who-is-definitely-breaking-uniform-codes look? All Spears' idea as well.

Pink-feathered scrunchies, platform Mary Janes, and sick '90s dance moves arguably defined a generation, and lead to one of the biggest leading acts of this century. But to Spears, it was just the start of her career, which is still huge 20 years from that first single. “Wow, that went quick," she told The Guardian. "It was such a fun and crazy time, it was a bit of a blur."

Maybe it was a blur to the iconic pop singer, but to her fans it was a defining music moment, and they wouldn't have it any other way.