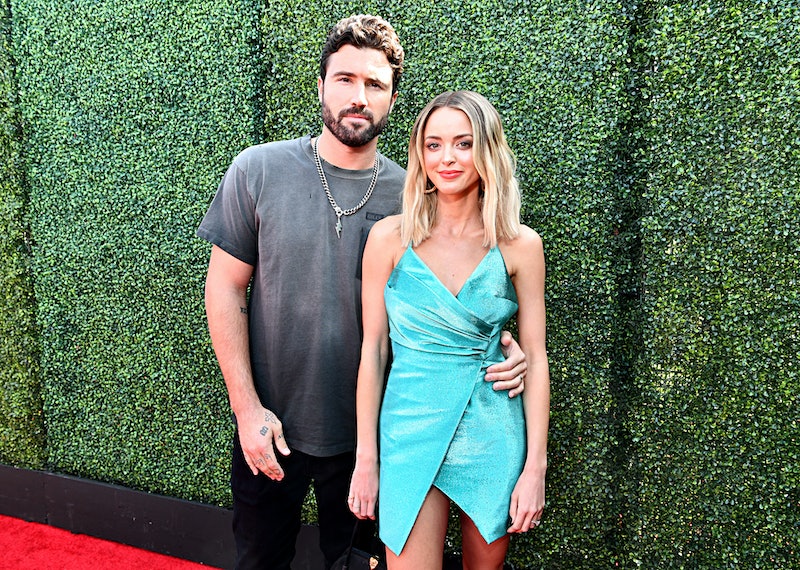 A year after tying the knot in a lavish ceremony in Indonesia, two Hills stars have called it quits, but Brody Jenner and Kaitlynn Carter's breakup statement emphasizes that the two will always "love and respect" one another. The couple issued a statement to Bustle through their reps, Scott Newman and Lindsay Maguire: "Brody Jenner & Kaitlynn Carter have decided to amicably separate. They love and respect one another, and know that this is the best decision for their relationship moving forward."

The couple met at a party in 2013, and Jenner proposed to Carter in 2016 after three years of dating; they tied the knot in an intimate ceremony in Indonesia in June 2018. However, according to E! News and TMZ, the pair's union was reportedly not legalized in the United States, as they reportedly did not fill out a marriage license after their lavish Bali ceremony. (Bustle reached out to Jenner and Carter's reps regarding the reports of the couple's marriage not being legal in the U.S., but has not yet received a response.)

The Jenner-Carter nuptials were fraught with family drama from the beginning, as some of Jenner's most famous family members — including his half sisters Kendall and Kylie and his father, Caitlyn — didn't attend the ceremony. TMZ reported that the wedding is also one of the biggest issues between Jenner and Carter, as the latter reportedly wanted to make their marriage legal in the U.S., despite Jenner's reported hesitance. The pair also reportedly disagreed over whether or not to expand their family, which they fought about on The Hills: New Beginnings.

"While I don't have kids, I'm gonna pretty much do what I wanna do and live for myself, as opposed to live for another human being," Jenner said during the premiere episode of The Hills: New Beginnings, according to E! News. "I think that's why she wants kids, she wants me to change in that way."

The reality series also captured Carter confronting Jenner over his claim that they had an "open relationship," and fighting over what appeared to be the reality star getting a lap dance from another woman at a club. According to Us Magazine, the promo for The Hills: New Beginnings also featured the couple fighting over Jenner getting home late from a DJ gig, with him telling his wife that she was acting like "a nightmare."

The show also captured tensions between the pair as their home was threatened by the 2018 Woolsey Fire in Southern California. Carter left and stayed with relatives to avoid the blazes, while Jenner refused to evacuate and stayed in their home. Page Six, who first reported the couple's split, also reported that Jenner and Carter's decision to appear on the show "didn't help" resolve the issues that they were already having.

In December 2015, Carter admitted in an interview with Fashion Week Daily that she wasn't interested in appearing on a reality show, despite having been approached in the past by producers. "For the longest time I’d always say no," she told the outlet. "I’ve had a lot of people approach me about that, related to my blog and being in the L.A. social scene. I’ve taken a meeting but it’s never felt right to me because I don’t want to be involved in a show that’s based on character drama."

Despite the drama captured on the show, the couple's statement on their split honors their long-term romance, and highlights both Jenner and Carter's commitment to keep their split as amicable as possible.