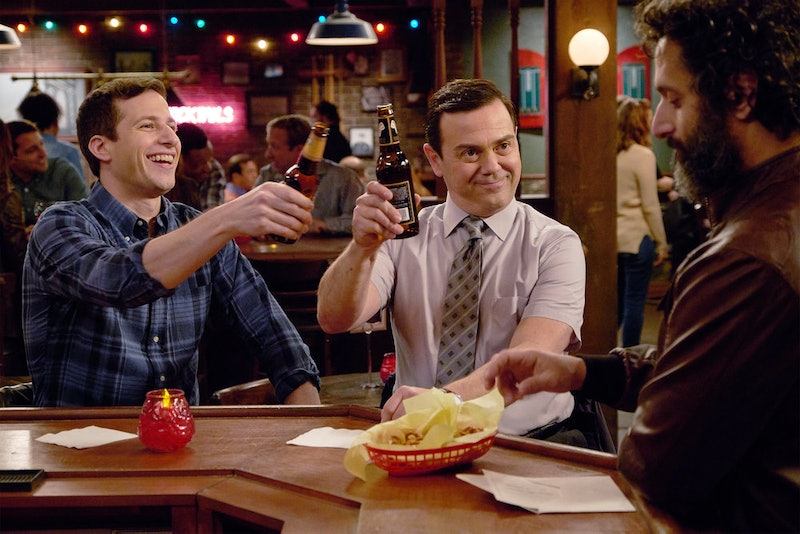 Nothing could keep those plucky cops down for long, so it's exciting but not surprising that Brooklyn Nine-Nine Season 6 has gained more episodes. Five more episodes to be exact, bringing the total from 13 up to 18. It's an embarrassment of riches, and just the newest piece of good news for the Golden Globe-winning comedy, which has had a rollercoaster of a year.

The beloved series was canceled at its original home on FOX in May 2018, after five seasons, leaving fans devastated. But just a day later, NBC rode in to save the day, scooping up the Andy Samberg-starring show for their own network. And not content to play the hero just once, they're taking things to another level by expanding that original order. Assuming the show's sixth season sticks to their established episode length of 21-23 minutes, that means an additional 105-115 minutes of Brooklyn Nine-Nine is coming your way very soon. The show's Twitter account celebrated the news on Friday in a tweet reading, "Nine + Nine = EIGHTEEN, y'all! We're coming back with even more #Brooklyn99 on @nbc. See you soon!"

And if you're wondering when all this gloriousness will reach you, it turns out that you don't have to wait long. Season 6 of Brooklyn Nine-Nine is set to premiere midseason on NBC, which means early-to-mid 2019. Yes, it's still another six months or so away, but, hey, it's much better than nothing.

Hopefully the exact date will be released soon, so fans can mark off their calendars and clear their schedules. But in the meantime, fans have the warm and fuzzy feelings that keep being generated by this show to keep them company. For as strange a journey as the police sitcom took to get here, this news about the episode expansion is just the latest indication that everything is working out as it should.

As Deadline reported, NBC was actually one of the networks that wanted Brooklyn Nine-Nine from the beginning, but they lost out to FOX in what turned out to be quite the bidding war when the show was first picked up. The network was understandably bummed, especially because NBC had previously been Samberg's home during his time on Saturday Night Live. So the fact that both the actor and the show have made their way back is quite the heart-warmer. As NBC Entertainment Chairman Bob Greenblatt revealed during NBC's annual pre-upfronts conference call in May, as reported by The Wrap:

“If I knew Andy Samberg was gonna be cast in that show, we probably would never have sold it to FOX. He didn’t sign on until after [we sold it to Fox], and we thought it was a missed opportunity from the beginning.”

So when the show became available again, Greenblatt says, "“We jumped on it really quickly,” adding, "And we’re thrilled to have it." The missed opportunity is clearly being salvaged, and the network is proving every day how eager they are to make the most of it.