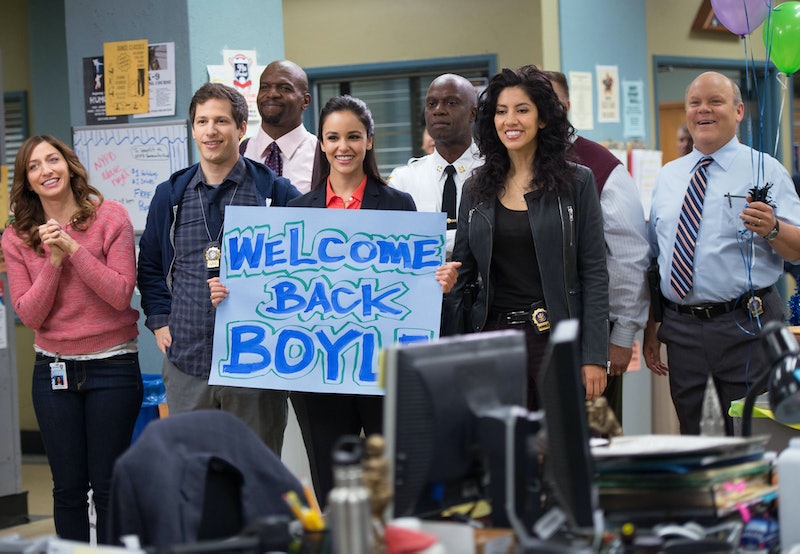 It's been a pretty stressful week for fans of Brooklyn Nine-Nine. The sketch comedy-style series was cut from Fox's fall lineup last week, only to be promptly picked up by neighboring network NBC one day later. And for all those fans still wondering why Fox canceled Brooklyn Nine-Nine, the network has finally given an answer. According to a Monday report from Entertainment Weekly, Dana Walden (who chairs Fox's television branch) provided some insights into Fox's decision to drop Brooklyn Nine-Nine from its fall lineup.

Judging by her recent statement, it certainly doesn't seem like the network's decision was borne out of any sort of distaste for the series itself. That doesn't come as much of a surprise, given the show's enduring top-notch wits. (As most B99 fans could probably tell you, the show has managed to maintain its high-quality slapstick tenor throughout its five-season run.) According to EW, Walden said the decision to give Brooklyn Nine-Nine the boot "was based on a variety of factors," which sound like they boil down to some scheduling conflicts. In the statement, Walden said:

"We love this show, those are great creators, it's a phenomenal cast. ... It's a great length of time for a single-camera comedy. Ultimately, we felt like we didn't have the exact right place to schedule it this year."

She also made sure to point out the network's years-long loyalty to the comedy series. In her statement, she noted that Fox "ordered [Brooklyn Nine-Nine] throughout five seasons," adding that "it performed best in our Sunday night lineup."

But despite its television merits, Walden explained that two of the network's other programs — Bob's Burgers and Thursday Night Football, respectively — ended up taking precedence over B99 in Fox's fall lineup. "We were trying to create a more cohesive program," Walden said of the network's upcoming fall roster, "and scheduling Brooklyn would prevent us from promoting something new." The Fox exec elaborated on that particular point in her recent statement, explaining that the influx of new programming prompted the network to make some tough decisions. To that end, Walden said,

"We wanted to give Bob's Burgers an opportunity to have a plum time period and really grow. It really limited the opportunities to schedule Brooklyn. With Thursday Night Football, there were two fewer hours to program."

Last week when Fox announced that it wouldn't be renewing Brooklyn Nine-Nine, this prompted a wave of upset from fans on social media who weren't ready to see it go. (A few celebrities chimed in, too, the likes of whom included Lin-Manuel Miranda and Mark Hamill.) But in a surprising move, NBC opted to pick up Brooklyn Nine-Nine, via its own network, hardly 24 hours later. Suffice to say, the unexpected save, on NBC's part, ushered in a surge of celebratory posts on Twitter, where fans and celebrities alike gathered to express their enthusiasm about the return of the Nine-Nine for a sixth season.

On Sunday, NBC entertainment chairman Robert Greenblatt released a statement explaining the network's decision to pick up Brooklyn Nine-Nine, according to EW. "Brooklyn is a show our company produces for Fox, so it's a show that's very close to us," he said in the statement. Greenblatt also expressed his appreciation for the frenzied fan response to Fox's cancellation, but noted that NBC was always on the same page, as far as rescuing B99 was concerned. "It was great to know the fans were outraged, but we were too," Greenblatt told EW, adding, "We love when fans yell and scream on Twitter, but we hope that transfers and they watch the show."

The contents of Sunday's statement fall closely in line with Greenblatt's comments to Variety last Friday, trailing NBC's initial announcement about the B99 pick-up. During his conversation, he was clear about NBC's longstanding commitment to Brooklyn Nine-Nine. "Ever since we sold this show to Fox I've regretted letting it get away," he said, "and it's high time it came back to its rightful home."

In addition to praising the comedy series as "one of the smartest, funniest, and best cast comedies in a long time," Greenblatt added that some big names from the show's cast and crew — like Andy Samberg, the series' star — "grew up on NBC." To that particular point, Greenblatt seems to be referring to Samberg's arguably legendary stint on Saturday Night Live, which kickstarted his comedy career.

Judging by Walden's latest comments on the network switch, it seems Fox is satisfied with Brooklyn Nine-Nine's new homestead. Concluding her Monday statement, she circled back to the network's rationale for dismissal before wishing B99 well: "Ultimately we decided we just didn't have room for it and were trying. We're really happy its found a new home."

If the enthusiastic bouts of celebratory fan tweets are any indication, it seems safe to say Fox certainly isn't the only one who's really happy about the decision. Here's to another year (at least) with the Nine-Nine.