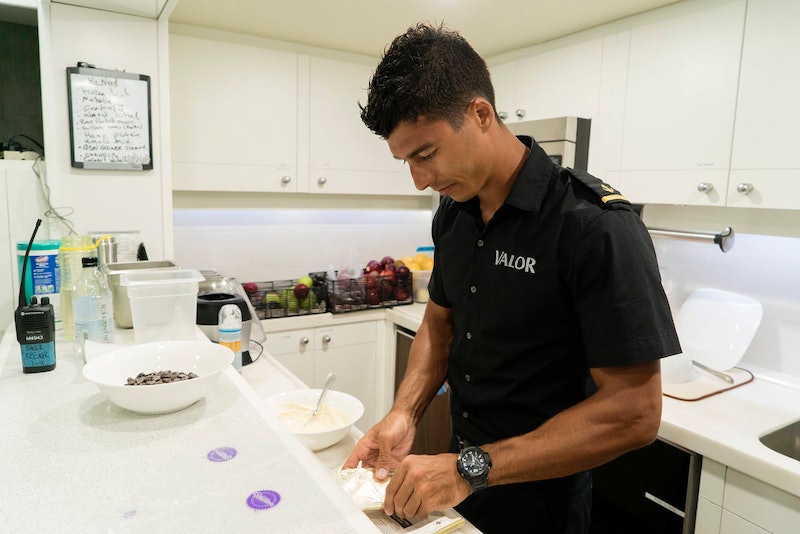 Summer may be ending in the United States, but on Bravo, it's time to hit the seas with the fifth season of Below Deck. And if you've seen the trailers for the new season, you might be wondering who Bruno on Below Deck is, along with the rest of the new crewmembers. While the new yacht, Valor, will be populated by some veterans, like Kate and Captain Lee, most members of the cast/crew will be newcomers. (Sadly, this means no Chef Ben, which will surely be the season's biggest disappointment.) According to his social media presence and what Bravo has revealed about the new reality star, Bruno will be a very interesting addition to the team. To start, according to Bruno's Bravo biography, he's not just new to Below Deck, but "new to the exclusive yachting world" and "excited to master his deckhand responsibilities."

This season, Bruno will be reporting to Nico, who you may remember from Below Deck Season 4 as the senior deckhand who got a little too turnt in the master cabin during an off weekend. And judging by the season's trailers, it won't be an easy road for either the deckhands or the interior crew when it comes to management and the chain of command Below Deck this year. Bruno doesn't stand out as a particularly dramatic presence, but you never know — sometimes it's the quiet ones who you have to look out for.

He Has An Interesting Story

According to his Bravo bio, Bruno is from Lisbon, Portugal, and he's coming from a pretty tough personal background. According to Bravo, "After a traumatic childhood, growing up with the loss of a twin brother and an abusive father, Bruno was forced to be an older brother and father figure for his family." So Bruno will probably be used to the challenges of responsibility he'll face on board the Valor.

He's Not A Yachtie Yet

Bruno's bio also elaborates that he gained most of his experience on cruise ships — something that other members of the crew have been known to condescend about every now and then. Certainly, the pressures of megayachting are unique, but if his bio is correct, then he's spent a lot of time working in hospitality on boats before, which seems like a natural fit.

He Was Single, But Not Anymore

In a behind-the-scenes clip, Bruno revealed he's currently single, and the rest of the crew members echo his relationship status. But on Twitter after the season filmed, Bruno confirmed that right now, he currently has a boyfriend.

He's Not A Shy Guy

Every season, Below Deck provides a little bit of eye candy for anyone who enjoys watching shirtless men frolic in the waves, and it looks like this year, Bruno might be the culprit. Bruno has a Tumblr dedicated to photos of him mostly naked. On one photo, Bruno wrote, "Because a nude is just a nude, look beyond that… if you think diferent then [sic] dont even bother putting like — you know what I mean." Frankly, I'm not sure what he means by that at all, but the overall message is clear: He's not ashamed to strip down, nor does he consider it a big deal.

He Has Other Aspirations

According to Bruno's Twitter account, he's not just excited to be a good-looking member of the Below Deck crew, but he's also working to become a successful fitness model and personal trainer. His personal website isn't up yet, but until then, you can follow him on Instagram to see how he stays fit.

And He's A Cat Person

Besides his travels and the upper half of his body, Bruno doesn't share too much personal information via social media. So, one of the only clues given about what he's like when he's not working out obsessively is his cat, Panda.

Hopefully Bruno will have a professional attitude to back his good looks up when he makes his Below Deck debut.