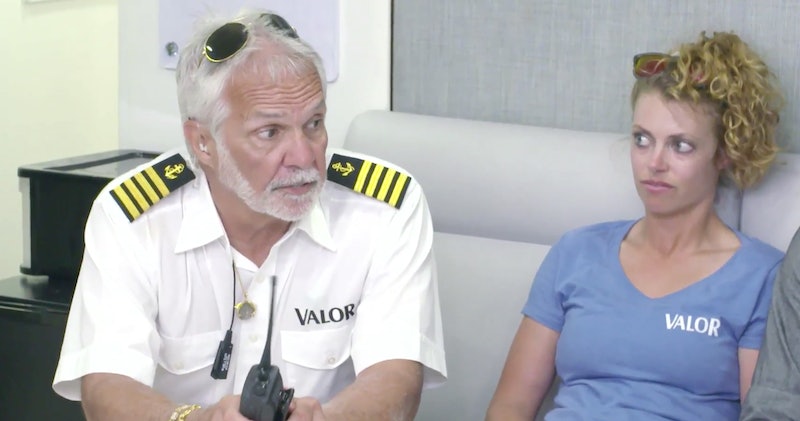 Someone scurry on up to Valor's bridge and give the yacht’s horn a celebratory honk, for the Below Deck Season 5 trailer has hit the open seas. Just like that cucumber gimlet that charter guest raves about, this video is amazing. Let's toss on our swim fins and dive right into the most important question: Who will be on this season? Well, thanks to the trailer, we now know that the fifth installment of the reality show will see the return of Below Deck veterans Captain Lee Rosbach, Kate Chastain, and Nico Scholly, as well as introduce Bravoheads to Brianna Adekeye, Jennifer Howell, Chris Brown, Bruno Duarte, Baker Manning, and Chef Matt Burns. The season premiere is slated to air on Sept. 5, and the trailer is available on BravoTV.com.

Someone please go back to the bridge of Valor and give the yacht’s horn a bittersweet honk, for Below Deck phenom and entrée stickler Chef Ben Robinson will not be on Season 5. It’s too bad he doesn’t bottle and sell his unmistakable cackle, because now would be a perfect time to pour some Chef Ben Laugh out.

Of course, the guy deserves a break and then some after pulling double duty on Below Deck Season 4 and Below Deck Mediterranean Season 1. And yes, he should only return if and when he’s ready to tie on his apron and jump back into the fray. But here goes the broken record again: No offense to Chef Matt, but two seasons without Chef Ben is two seasons too many.

Again, no offense to Chef Matt. For all we know, Chef Matt could have plenty of OnionGate-level mayhem waiting up the sleeve of his chef's coat, and that's really all we can hope for. As Below Deck Mediterranean Season 2 has proven time and time again, Chef Ben isn’t the only yacht chef who has a knack for creating bonkers reality TV drama.

But he may be the only Below Deck chef to get this heated about "brunch" vs. "breakfast" vs. "the first meal of the day." And that, among many reasons, is why Chef Ben will always be an integral part of the Below Deck universe.

According to ancient Bravo legend, if you put your ear up to a bowl of conch meat — not the shell — you can hear Chef Ben's gorgeous laugh.