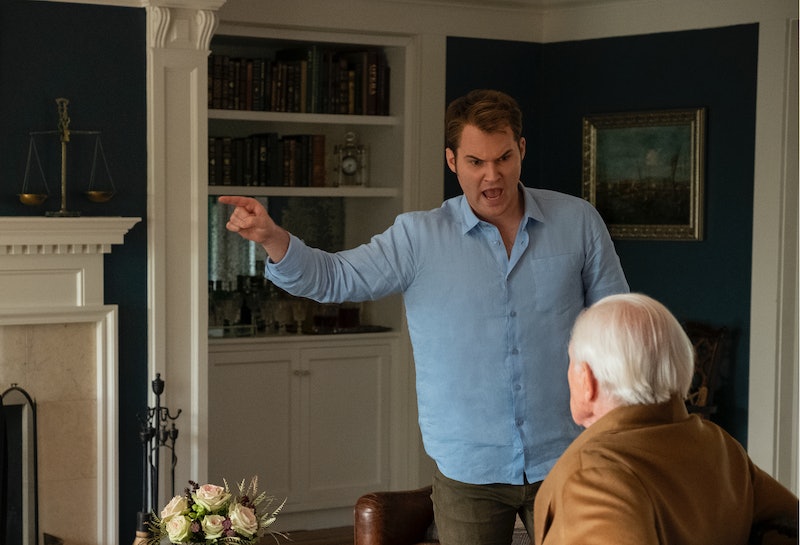 Spoilers ahead for 13 Reasons Why Season 3. In the first two seasons of 13 Reasons Why, Bryce was not only a common enemy to the rest of the characters, but to viewers at home, clearly embodying the problems with rape culture and toxic masculinity so persistent in the real world. The judge sentencing Bryce to only three months of parole for assaulting Jessica reflected a sad, frustrating reality, while his reasoning — that he didn't want to ruin Bryce's future — marked the epitome of white male privilege. But whereas watching him get off essentially scot-free was meant to make you angry in Season 2, Season 3 will enrage you for the opposite reason: for a show that's dedicated so much time to exposing the damage of victim-blaming and stigma, Bryce's relationship with Ani threatens to undo that message entirely.

When Season 3 opens, flashbacks show Bryce being bullied at his new school and isolated by his former friends. This seems set up to make us sympathize with him, but that's difficult to do when he's focused on how he's inconvenienced and hurting, rather than the pain he's inflicted on others. ("I don't get to start over, 'cause no one's gonna let me. So go ahead. Shoot me," Bryce tells Tyler.) This is only further bungled by the introduction of Ani, a British transfer student and the daughter of Bryce's grandfather's nurse. She and her mother live in the guest house of the Walkers' estate, and through repeated run-ins before Bryce's death, the two start a friendship which later becomes romantic.

As the narrator, Ani tells us that there was more to Bryce than his violence and aggression, but as a new character who we never learn much about, it's hard to take her word for it. We were there in the first two seasons, when Bryce was an abhorrent human being; Ani wasn't. And while yes, Bryce made a few seemingly sincere attempts to change — going to therapy, standing up to Monty for Tyler, recording his own confession tape — that progress is invalidated by scenes that revealed his true, volatile nature. He still victim-blamed Jessica while hanging out with Alex, broke Zach's leg after learning he supported Chloe through her abortion, and even manhandled Ani by the pool — revealing that, even though he treated her more gently than any other woman he'd been with, his anger and entitlement were still there, lurking dangerously beneath the surface.

The truth is that up until — and perhaps even including — Ani, all of Bryce's relationships with women were abusive. There are three girls who 13 Reasons Why has mainly focused on: Hannah, Jessica, and Chloe. Bryce raped all of them. He never learned how to have a healthy, normal, non-sexual relationship with a girl his age, so why reward him with yet another conquest? What purpose does Bryce and Ani's relationship really serve, except to add the drama of yet another Bryce/Girl/Clay love triangle?

Perhaps 13 Reasons Why meant Bryce's actions to be seen as performative, but the inordinate amount of time it wastes showing Bryce's "sweet side" with Ani, his mom, and others muddies any point the show may have been trying to make about whether or not sexual assaulters can change. Instead, it seems to reward Bryce with sex and love for making a few tiny steps toward betterment — and even worse, to ask us to cut an admitted rapist some slack.

Is that the message the show is trying to send? Probably not, but it is, nonetheless, the one that comes across — something especially unfortunate considering much of the rest of the season is focused on uplifting survivors. As Jessica works to reclaim the very power Bryce stripped from her, his and Ani's relationship pulls the spotlight away for the sake of creating a melodramatic love triangle. And in a controversial show that literally warrants a PSA be shown at the beginning of the season, that's at best questionable, at worst damaging, and certainly enough to leave you incensed.