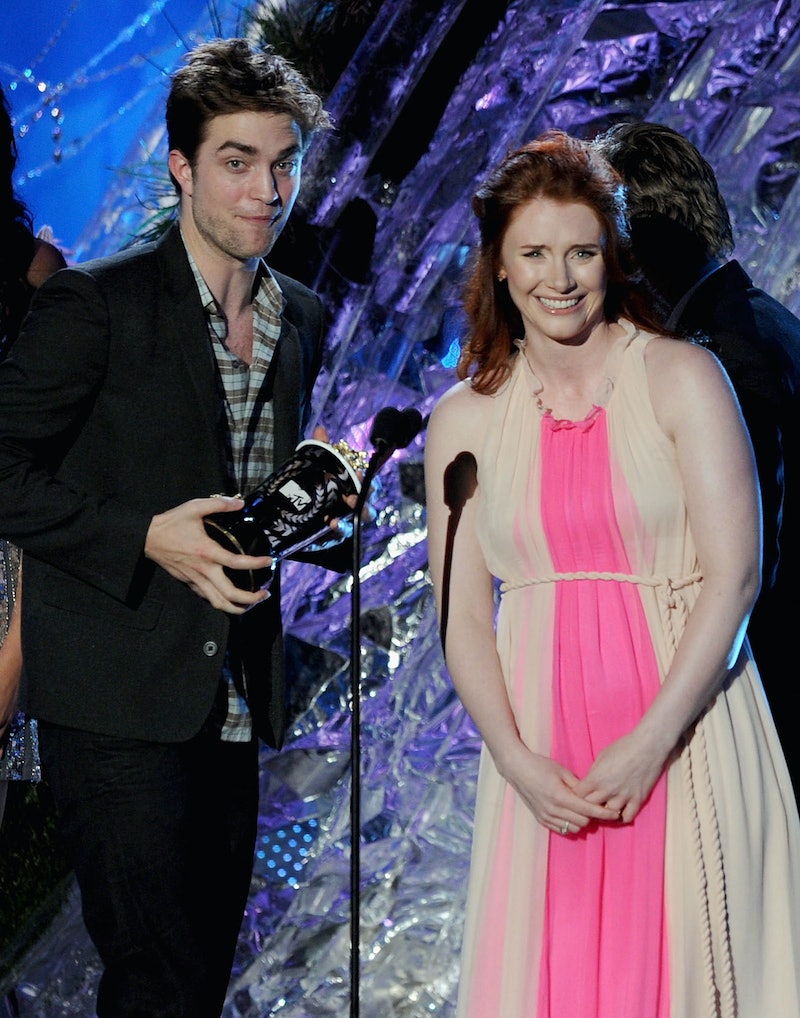 Even major stars can have a celebrity crush. During an appearance on PeopleTV's Couch Surfing, Bryce Dallas Howard revealed her Robert Pattinson crush, noting that her interest in the actor dated back to his Twilight days. Pattinson, who became a teen heartthrob after being cast in Twilight as Edward Cullen in 2008, starred alongside Howard in the franchise's third installment The Twilight Saga: Eclipse.

Prior to being cast in the film, Howard was a major fan of Pattinson, and her friends knew about her crush. The Jurassic World star shared with People that her best friends "made a bunch of Post-it Notes for me with a picture of Rob's face." The actor reported that under Pattinson's face, the Post-It read: "Live dangerously." Howard added, "I wrote all my notes on that for years."

Howard told host Lola Ogunnaike that her husband, Seth Gabel, was not too thrilled with her obsession with Pattinson. "When I first saw the first Twilight movie, I watched it with my husband," Howard said. "And whenever Robert Pattinson came on screen, I would squeeze his hand so hard." After a while, Gabel had to mention the hand squeezing. "At a certain point he was like, 'Can you stop squeezing my hand when that man goes on screen?'" the actor said.

On the Twilight: Eclipse set, Pattinson lived up to Howard's dreams. The Jurassic World star reported that he was, "a total sweetheart" and that the two, "took a bunch of photographs that I still have with my decapitated head, mourning my decapitated head."

In a March 2012 interview with The Daily Mail, Howard hinted at her Pattinson fandom when she shared that she was terrified of hitting him during the big fight scene in Eclipse. "I was scared fighting Robert Pattinson in case I hit his face," she said. "There was a massive battle at the end of the last Twilight film where Rob and I really face off. There was a lot of swiping, grabbing, throwing, tackling... I dislocated my wrist."

Pattinson seems to have come away unscathed, thanks in part to Howard taking care not to hit his face. Just don't ask her not to write on his famous mug, because those Post-Its sound too cool to waste.

More like this
At 28, Rosie Perez Risked Her Career To Stop Playing Stereotypes
By Gabrielle Bondi
12 Years Ago, Austin Butler Manifested His Oscar Nom In This Disney Movie Scene
By Jake Viswanath
Sandra Bullock’s Razzies Speech Proves She’s The Ultimate Miss Congeniality
By Sam Ramsden
The 'Scream 6' Trailer Shows Off Hayden Panettiere's Return & Ghostface In NYC
By Jack Irvin and Jake Viswanath
Get Even More From Bustle — Sign Up For The Newsletter
From hair trends to relationship advice, our daily newsletter has everything you need to sound like a person who’s on TikTok, even if you aren’t.