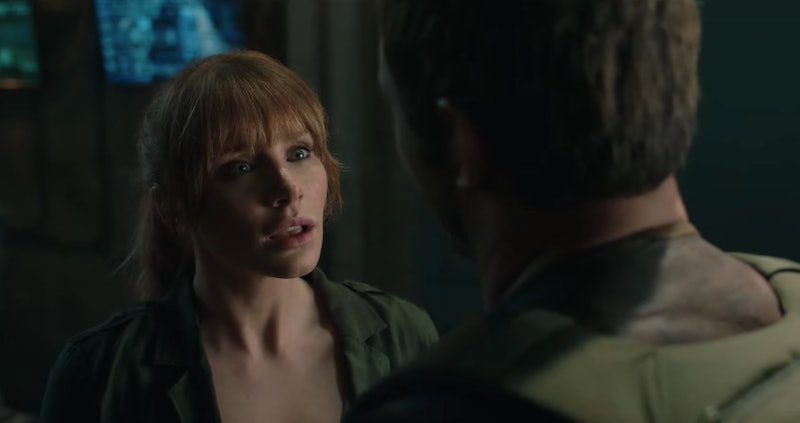 Finding out about Hollywood paychecks is like living in Groundhog Day, but in the worst way possible. The fact that women frequently earn substantially less than their male counterparts in movies keeps showing up in headlines. It's great that the issue is gaining national attention, but it's also disappointing when it involves a highly anticipated film. For instance, apparently Chris Pratt received $2 million more than Bryce Dallas Howard for Jurassic World 2, Variety reported on Tuesday. While Pratt reportedly raked in $10 million for Jurassic World: Fallen Kingdom — which hits theaters June 22 — Variety listed Howard's paycheck as $8 million. (Bustle reached out to Universal Pictures, as well as Howard’s rep, for comment, but did not receive an immediate response.)

As IndieWire pointed out, Howard and Pratt are co-stars in Jurassic World's franchise, and given that the first Jurassic World movie was critiqued for what was deemed a sexist portrayal of Howard's character, it's only natural that this paycheck news would give fans of the series pause regarding the sequel.

Even though Pratt has starred in more box-office heavy hitters than Howard, that shouldn't automatically promise him a larger paycheck — at least not a paycheck that's a whole $2 million more than Howard's, if the reports are true. The two actors have equally important roles in the franchise, and their paychecks should reflect that, full stop.

In Jurassic World, Howard plays Claire Dearing, the operations manager at Jurassic World. When everything goes haywire in the movie, Claire enlists Pratt's character, velociraptor trainer Owen Grady, to help her find her two nephews. You didn't have to look too deeply to find the gendered stereotypes that so many criticized the first Jurassic World for portraying. All you really had to do was take a look at Claire running around in stilettos and an undershirt to realize that something was off about Jurassic World (besides, you know, the rogue dinosaurs).

Claire's outfit in Jurassic World was just the beginning of what critics found troubling about the character. At first, the movie presented her as a rigid and unlikable boss lady — which usually translates to "b*tch" in many movies — and she quickly becomes more and more sexualized as Owen attempts to "loosen her up." Even The Avengers director Joss Whedon called the movie out for its blatantly sexist stereotypes. "And I'm too busy wishing this clip wasn't 70's era sexist. She's a stiff, he's a life-force — really? Still?" Whedon tweeted in response to a promotional clip, Vulture reported back in April 2015.

Whedon wasn't the only one who called out 2015's Jurassic World for presenting a female role that seemed more prehistoric than Laura Dern's original character in 1993's Jurassic Park. Director Colin Trevorrow responded to Whedon's comment in an interview with an Italian site called Bad Taste that same year. Trevorrow said,

"I wasn’t bothered by what he said about the movie and, to be honest, I don’t totally disagree with him. I wonder why [Universal] chose a clip like that, that shows an isolated situation within a movie that has an internal logic. That starts with characters that are almost archetypes, stereotypes that are deconstructed as the story progresses. The real protagonist of the movie is Claire and we embrace her femininity in the story’s progression. There’s no need for a female character that does things like a male character, that’s not what makes interesting female characters in my view. Bryce and I have talked a lot about these concepts and aspects of her character."

Trevorrow's comment in today's context presents an entirely new issue. If Claire is the protagonist of Jurassic World (which she was), then why would she not receive either equal or higher pay in the sequel than Pratt? In the new film's trailers, Howard's character again seems of equal importance as Pratt's, so it would only make sense that she would get as much pay as Pratt did. Then again, you would probably also presume that Claire Foy would have received the highest paycheck for her starring role in The Crown, but that didn't happen either, as Variety also recently revealed that Foy's costar, Matt Smith received more money for his role.

It was eventually announced that Foy would receive $275,000 in "backpay" to compensate the actor for her original inequitable paycheck. Perhaps the same will happen for Howard if the reported $2 million difference between her and Pratt's paychecks garners enough outrage. If Hollywood could simply start paying its male and female co-stars more similar paychecks for their roles in blockbuster movies, though, that would be the best case scenario.