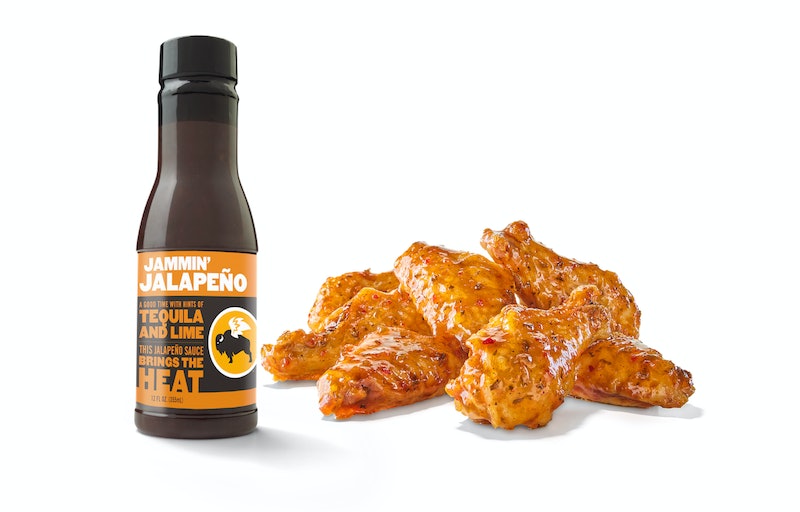 It's been three years since diners could smother their chicken wings with a sauce so good it's worth a social media uproar. Three years ago Buffalo Wild Wings took Jammin' Jalapeño sauce off the menu. A devastation as real as when Noah and Allie were separated in The Notebook shook fans across the nation. Some pairs are worth rooting for. And fans fought for the reunion of Jammin' Jalapeño and chicken wings. Hard. For three years.

It's time to cue riding off into the sunset because the sauce is back. And it's all thanks to the fans. What could just be a story about a long lost item returning to a menu is actually something so much more than that. This is a story about commitment and a victory for devotion.

Buffalo Wild Wing's Director of Social Media, Micah Hart, stated in a press release, "Since we took it away three years ago, invariably whatever we post on social will have some sort of commentary from fans about bringing back Jammin’ Jalapeño." The passion for the sauce did fall into an abyss. The pleas were heard — or, well, read. Again and again and, you guessed it, again. There was even a Change.org petition with over 1,000 signatures dedicated to bringing the sauce back. Some people claimed the sauce is what brought them to the chicken wing restaurant in the first place. That's love opening doors.

Of course no reunion between lovers would be complete without a montage of the path that led them to that defining moment. Which is why Buffalo Wild Wing's social media team took the time to sift through years of tweets and maybe a little bit aggressive comments to patch together a tear-jerking slideshow.

The humorous and simultaneously heart warming video is set to a piano melody for that additional cinematic affect. You might want a tissue nearby in case you are so moved to shed a salty tear. Set to the dreamy, lovely tune are screenshots of the angry tweets that protested Jammin' Jalapeno's removal from menus. One tweet featured in the video reads, "Let's bring back jammin' jalapeno, you bastards." Another features the middle finger emoji. Well, in this case of love and war, you cursed and Buffalo Wild Winds answered.

The favored sauce, described on the bottle to have a hint of "tequila and lime", will be in stores as well as bottled for purchase. There is, however, a catch. The return of the sauce will only be for a limited time. According to the press release, "Jammin’ Jalapeño will be available as a wing sauce flavor and will be sold in bottles in restaurants through February 17." At least fans can enjoy Valentine's Day with the beloved Jammin' Jalapeno sauce.

My advice is to appreciate every waking, dining moment together. Don't take one drop of sauce, not one chicken wing, for granted. Stock up for the holidays and keep a bottle close to your heart, which is to say, the kitchen. Congratulations Buffalo Wild Wing sauce fans. You fought for what matters and got your happy ending. Roll the credits.