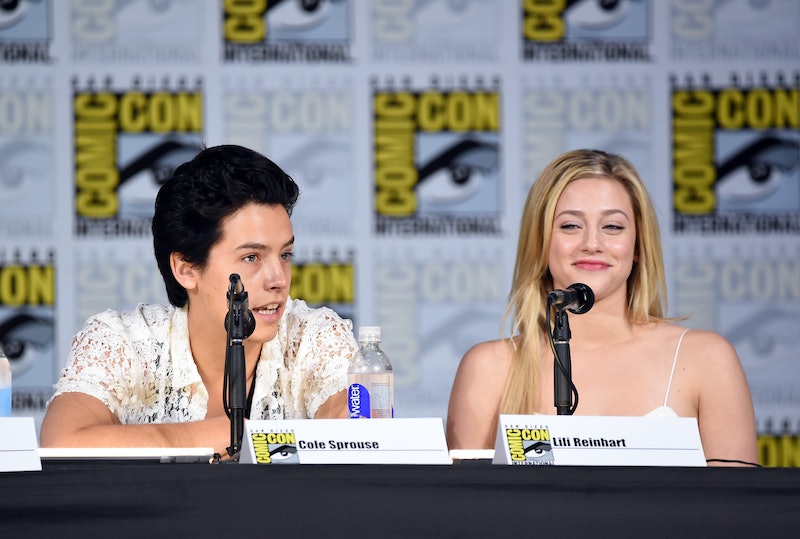 At the end of Season 1, we saw the characters and town of Riverdale torn apart by an attempted murder. When a masked man came into Pop's diner and shot Archie's father point blank, it became clear that the mysteries and history of the forested town would come brimming to the surface in a big way in the show's second season. Of course, no one is affected by the shooting more than the town's teenagers. And, because of the traumatic event, it goes without saying that their relationships, romantic and otherwise, would be tested too. During roundtable interviews at San Diego Comic-Con, Lili Reinhart (who plays Betty), and Cole Sprouse (who plays Jughead) spoke about the future of their characters, and of course: the fate of Bughead in Season 2.

"Pray for Bughead," Reinhart says, clasping her hands together dramatically. "Season 2 is a split between Riverdale itself, so it effects Betty an Jughead’s relationship. Them being at separate schools... it takes its toll. It becomes a Romeo and Juliet situation."

It's tough to determine exactly what she means when referencing the star-crossed lovers of Romeo and Juliet, though the fact that Jughead is now attending Southside High means they may have to choose opposing alliances within the town. Riverdale showrunner Roberto Aguirre-Sacasa speaks to this transition. "Jughead is going to Southside High. In the first episode, because it’s focused on the aftermath of Season 1... the gang is together."

But, as Aguirre-Sacasa teases, the gang will not stay tight-knit for long. And how can they? Jughead has seemingly joined the Southside Serpents, a very likely suspect in the attempted murder of Archie's father, and that's enough to tear even the closest of friendships apart.

Cole Sprouse, who plays the tortured teen writer from the wrong side of the tracks, says that the writers of Riverdale, "looked at Jughead and were like, 'Make him unhappy. Give him a treat. Now pull him back again," he says, running a hand through his jet-black hair. "Dark seems to be the buzzword we’re using for Season 2. Season 1 left him in a vulnerable position… Jughead makes understandable connections," he says, possibly referencing his newfound alliance with the Serpents.

According to Sprouse, the fact that Jughead comes from a poor family will become a greater source of tension in Season 2, and may be another reason for tension within his relationship with Betty. "Archie, Veronica, and Betty — unlike Jughead — are privileged. Betty arguably has the most privilege..."

The actors and showrunner are coy when teasing the second season of the CW show, but come Wednesday, Oct. 11, all — well, some — will be revealed when Season 2 premieres. Check out a sneak peak from Comic-Con below: