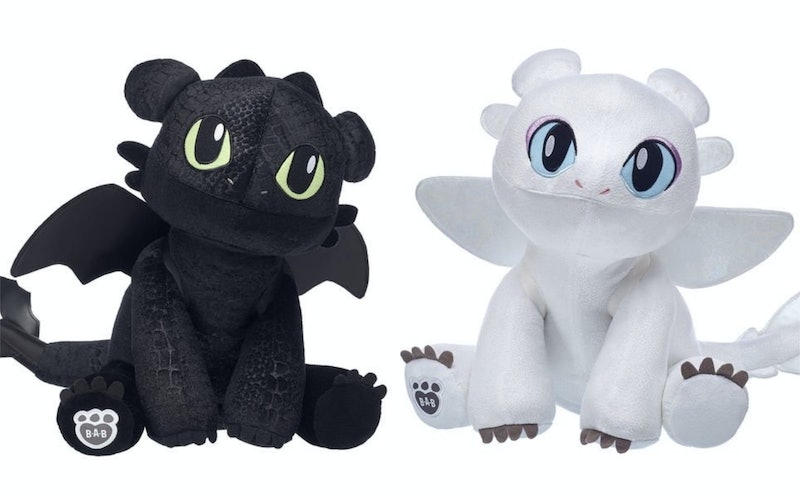 Welcome to the club I just started, which I am loosely calling "Human Adults Who Are Old Enough To Do Their Own Taxes Without Calling Their Parents, But Still Freak Out Over Build-A-Bear News." Specific to that genre is today's news, which is that Build-A-Bear just launched How To Train Your Dragon plushes that are so cute that I'm more willing to abandon the human world for Hiccup and Toothless's fictional one than ever. And seeing as I am someone who once held all of her friends emotionally hostage by making them view the first film in its entirety for my 19th birthday, that truly is saying something.

The How To Train Your Dragon collection at Build-A-Bear features four options, three of which you can either buy unstuffed so you can have the building experience in stores, or buy fully stuffed and shipped to you. The four include two versions of Toothless (Twothless, if you will), a version of the Light Fury who is about to make her debut in the upcoming How To Train Your Dragon: The Hidden World, and the online exclusive version of dragon icon Meatlug.

First, though, a look at our beloved and sassy fave, the OG Night Fury, Hiccup's BFF and the world's gift from dragonkind: Toothless.

"Ready to fly? Take off with your very own Toothless furry friend! With black fur and green eyes, this playful, loyal and intelligent dragon is ready to become your new BFF (Best Flying Friend)!" reads the description on Build-A-Bear's site.

But for the true Toothless stans out there, it gets better — there's a special edition version that SHINES.

This is a nod to Toothless's bioluminescent scales, and also just the fact that he is still the snazziest and most extra dragon around. That said, Toothless is about to get a run for his money now that a brand new Light Fury is on the scene — while we don't know much about her role in the upcoming movie, we do know that she's going to have Toothless quite smitten, and has plenty of cool abilities to showcase.

"Fire up your imagination with Light Fury!" says the Build-A-Bear site. "With her long tail and white wings, this elusive and untamed dragon is ready to soar into your collection. Light Fury has sleek white fur, soft brown claws and light blue eyes."

Rounding out this collection is dear Meatlug, who is an online exclusive, and may just be the snuggliest dragon of the whole bunch.

Make sure to get a plush version of your fave before the upcoming release of How To Train Your Dragon: The Hidden World, which is set for a Feb. 22, 2019 opening in the U.S.; I, personally, will take this as an opportunity to go full circle and make my friends all watch it for my 28th birthday, because birthdays are nothing if not an excuse to force all your friends and loved ones to nerd out over fictional dragons with just the right amount of 'tude.