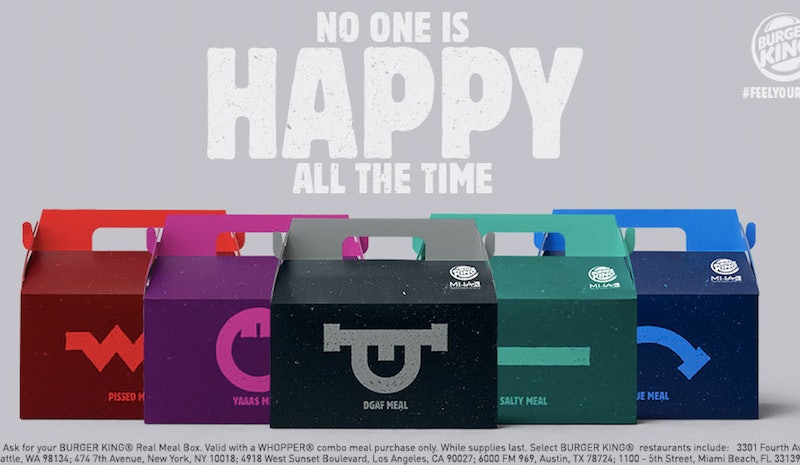 For Mental Health Awareness Month, an unlikely duo has teamed up on a campaign geared towards encouraging people to feel however they feel — not how society dictates they should feel: “Real Meals” have come to the Burger King menu, thanks to a partnership between BK and the non-profit organization Mental Health America. It’s no surprise that people across the internet have started referring to them as “Unhappy Meals”; they do seem to be something of a dig at Burger King’s primary competitor, McDonald’s. But hey, taken together, it means you can now get a boxed meal representing your exact mood — whether you’re feeling happy, angry, salty, sad, nonplussed, or elated. The combination is… interesting, to say the least.

Founded over a century ago in 1909, Mental Health America is “dedicated to addressing the needs of those living with mental illness and to promoting the overall mental health of all Americans” through public policy, peer advocacy, and education and outreach. Said Paul Gionfriddo, MHA’s president and CEO, in a press release, “MHA is very pleased to partner with Burger King. While not everyone would think about pairing fast food and mental health, MHA believes in elevating the conversation in all communities in order to address mental illness Before Stage 4.” Continued Gionfriddo, “By using its internationally-known reputation to discuss the importance of mental health, Burger King is bringing much-needed awareness to this important and critical discussion — and letting its customers know that it is OK to not be OK.”

The Real Meals, which launched on May 1 at select Burger King locations, are available in five varieties: The Pissed Meal, the Yaaas Meal, the DGAF Meal, the Salty Meal, and the Blue Meal. Each meal also comes in an appropriately-designed box featuring a particular color and a stylized illustration of a mouth: The Pissed Meal is bright red with a jagged, angry mouth; the Yaaas Meal is purple with a wide-open, surprised-looking mouth; the DGAF Meal is black with a mouth sticking its tongue out; the Salty Meal is a green-leaning teal with a ramrod straight, unimpressed mouth; and the Blue Meal is (what else?) blue with a frowning mouth.

The boxes do however, all contain the same meal — a Whopper, an order of fries, and a drink.

A short video was released along with the announcement which riffs on the “Have It Your Way” slogan for which the chain has been known since 1973:

According to the National Alliance on Mental Illness, approximately one in five adults in the United States experiences mental illness in any given year — but our culture is such that we’re often not seemingly “allowed” to show when we’re struggling, let alone talk about it. And the effects of mental health stigma are both numerous and devastating: Research has shown that people will withhold help, avoid, coercively treat, and even segregate other people who are dealing with mental illness, while self-stigma — the internalization of public stigma people who have mental illness can experience — can result in issues like the “Why Try? Effect” and prevent people from getting the help they need and deserve.

Mental Health Awareness Month, which was started by Mental Health America and first observed in 1949, aims to both educate the public and mental illness and mental health and to reduce stigma against it. To that end, the organization releases a “toolkit” during each year’s observance centered around a specific theme. In 2019, the theme is “4Mind4Body.” Said Paul Gionfriddo about this year’s theme, “When we talk about health, we have to focus on both physical health and mental health. It’s important to see the whole person — and make use of the tools and resources that benefit minds and bodies together.”

I’ll be honest: I’m not totally sure how I feel about the Real Meals (which is a little ironic, all things considered). Although I can’t deny that there’s at least some appeal in being able to get something called the DGAF Meal — particularly as a fully-grown adult who still buys Happy Meals for myself from time to time — the campaign seems more than a little gimmicky to me. I might be more impressed if a portion of the proceeds from Real Meal sales went to support mental health advocacy groups or non-profit organizations that, say, help provide mental health resources to underprivileged communities. This, however, does not seem to be the case; the press release notes only that Burger King has partnered with Mental Health America on the campaign, with no information included about where the proceeds from Real Meals sales will go.

Bustle did reach out to Burger King for clarification, though, and a spokesperson for the company said that Burger King donated an unspecified amount to MHA for the partnership. I also do appreciate the campaign's effort to normalize the fact that it’s OK to feel however you feel at any given moment — Burger King is a highly visible brand — so at least there’s that.

The Real Meals are limited edition and available only at a few locations, so you’ll have to be in the right place at the right time to get them. In Seattle, you can find them at the 3301 Fourth Avenue South location; in New York, they’re at the 474 7th Avenue spot; in Los Angeles, they can be found at 4918 West Sunset Boulevard; in Austin, Texas, head to Farm-to-Market 969; and in Miami Beach, get ‘em at 1100-5th Street. To get one, just go to one of those locations and ask for a Real Meal.

More like this
How To Make The Grinder Sandwich TikTok Is Obsessed With
By Emma Garza
TikTok’s “5-9 Routine” Trend Is Here To Boost Your Productivity
By Courtney Young
What Is "The Ick?" The TikTok Dating Term, Explained
By Courtney Young
18 Games Like Wordle To Play Online
By Kaitlyn Wylde and Emma Carey
Get Even More From Bustle — Sign Up For The Newsletter