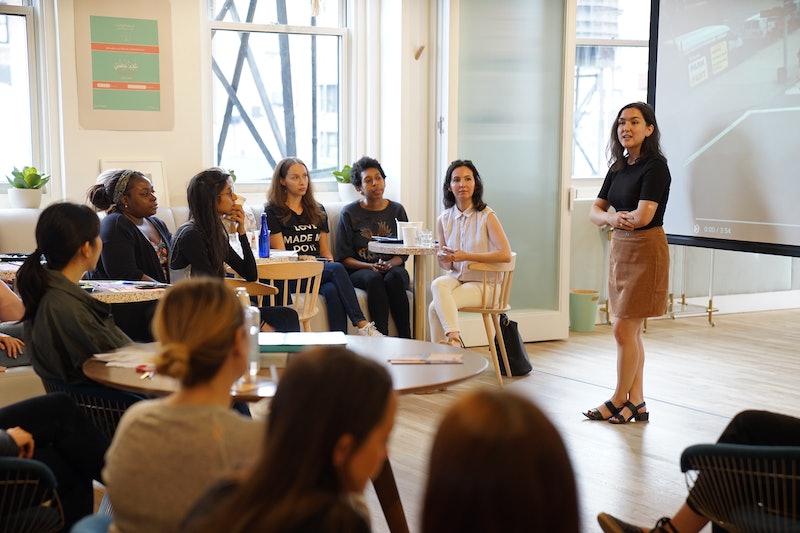 In 2017, readers of Bustle and members of The Wing, a women-only co-working space and social club in New York City, have become particularly energized around and invested in issues of social justice, women's issues, and service to their communities. Whether this can be attributed to a need to feel useful under the Trump administration, or a general increase in "wokeness" since the word went mainstream last year, it has been a beautiful thing to observe. Bustle is publishing content on how to protest Planned Parenthood defunding and ways to help Americans in marginalized communities, and The Wing is offering programming on supporting our LGBTQ communities and raising awareness around the mental health care issues faced by refugees, among many other topics. Given our shared missions, we decided to join forces to organize a Saturday of Service and lunch with The Wing and Bustle on June 3.

Our teams brought in three service organizations to educate The Wing members and Bustle editors and readers about ways they serve their communities and how volunteers can get involved. Courtney Lum, a Giving Officer from City Harvest, spoke about the 1.4 million New Yorkers, many of them women and children, who face hunger every year, and how volunteers can work with City Harvest through mobile markets, repacks, and greenmarket rescue.

With donations from KIND and Blue Diamond, volunteers were able to put together 75 snack packs to feed hungry New Yorkers at the Holy Apostles Soup Kitchen in midtown Manhattan.

Sarah Murphy and Elizabeth Henderson, Director of Development and First Step Program Director at Coalition For The Homeless respectively, spoke to the group about the problem of homelessness in NYC, where 61,277 people are currently without homes. Eighty percent of the people currently living in homeless shelters in NYC are in families, mostly comprised of a single mother with children.

Murphy and Henderson spoke specifically about Coalition For The Homeless First Step Program, which trains homeless and low-income women in the skills and experience they need to find jobs to support themselves and their families.

Volunteers can sign on with First Step as a student mentor, mock interviewer, or guest lecturer. Another way to serve this community is to provide them with the hygiene products that they need to get through each day, as well as the makeup and skin care products that help them feel like their best selves when going on job interviews. Thanks to donations from Cora, Suave, Maybelline, Tampax, Benefit, Olay, Vaseline, Yes To, and H2O+ Beauty, volunteers put together 380 hygiene and makeup kits, and those brands donated an additional 260 items of body wash, soap, shampoo, mascara and tampons that will be distributed to First Step students.

Bustle and The Wing were also joined at the event by Girls Write Now, an organization that offers mentorships, portfolio building, readings, and college prep for at-risk girls. Senior Communications Advisor Molly MacDermot and Mentor Morayo Faleyimu spoke to the crowd about how to get involved by donating, becoming a mentor or mentee, or joining the GWN team.

Event attendees wrote letters about the wisdom they wish they had known as teenagers, for MacDermot and Faleyimu to pass to the mentees.

The event brought about hundreds of donations, engaged dozens of passionate volunteers, and even inspired several attendees to commit to future ongoing volunteer opportunities with City Harvest, Coalition For The Homeless, and Girls Write Now.