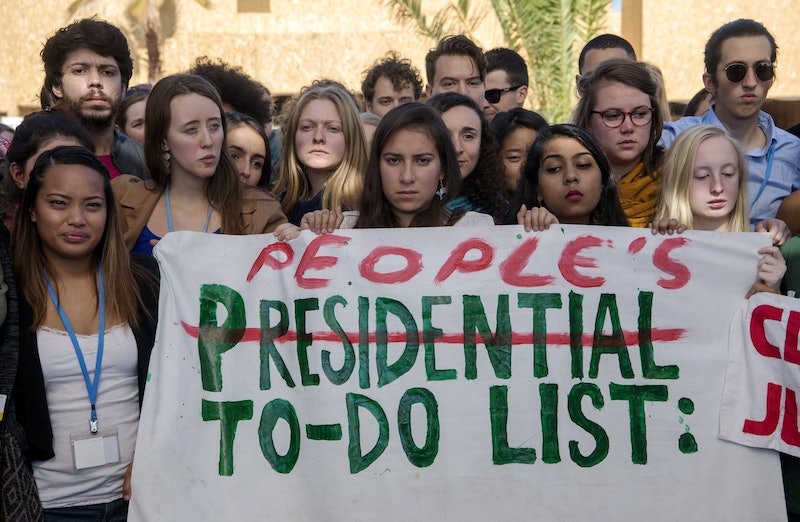 The unlikeliest ending to the 2016 presidential election came true. Donald Trump is the president-elect and the overwhelming emotion to flood social media in the wake of his win is fear, as well as all of the emotions that spur from fear. The results of the election have brought on vitriol, anger, anxiety, and confusion, stemming from an uncertainty of what the next four years will look like. But already, Americans are starting to combat that fear with something much more positive: love. Americans worried about their future are offering love and support, helping each other look for ways to bring some good to the country. If you want to contribute to that effort, a great way to start is to help marginalized Americans who feel unsafe in the face of a Trump presidency.

As much as we may wish it didn't, Trump won the election, and there are no time-turners to take us back to a moment before he became the president-elect, no TARDIS to hop into, and no way to make the next four years go by any quicker. What we can do, however, is everything we can to support those who need it most. Non-white citizens, LGBTQIA+ people, Americans with disabilities, immigrants, Muslims, and women have all been targets of Trump during his campaign and have the most to lose during his presidency. To show your love in more than 140 characters, here are ways to help the marginalized as they face this uncertain time.

Let those in your life who have the most to lose know that you support them, and that you will continue to work to ensure that their rights are honored and that their individuality is not snuffed out in the face of a President who has the enthusiastic support of former KKK leader David Duke. Whether it's by calling them, listening to their anxieties, and offering support, or spending time together to remind them that they have people on their side, just being there for people who you know is the first step to helping marginalized Americans.

Give power and support to organizations dedicated to protecting the rights of minority groups. Organizations like the National Immigration Law Center, Planned Parenthood, and the American Civil Liberties Union will all work to protect those whose rights are at risk of being taken away.

Take Care Of Yourself

If you're feeling especially distraught over the result of the election, take some time to help yourself. It's a lot harder to stand up for others when you are not well. Taking a moment to practice self-care will make you stronger, and therefore a stronger support system for others.

Volunteer With An Organization

Organizations like Campaign Zero, AmeriCorps, and the Equal Justice Initiative need supporters to help carry their message of love, peace, and tolerance.

Get Involved In Local Politics

If you find yourself moved to action, learn about how to get involved in local politics. While the presidential elections are major events, the political process is never-ending and it begins at the local level. Standing up for others on Twitter can only do so much — try standing up for each other in the room where it happens.

Speak alongside those who need support, and get in touch with the politicians that represent you. Let your elected officials know that you stand for love and human rights, and not hatred and oppression. Taking an active role in politics can help put people in power who will support and respect minority groups. Visit Common Cause to find out who your elected officials are and how to contact them.

It's safe to say that no one expected things to turn out the way they did, but here we are. There's no telling how the next four years will go, and though it may be scary — the work truly begins now. It's time to stand with marginalized citizens to show politicians and each other what the future of America should be.