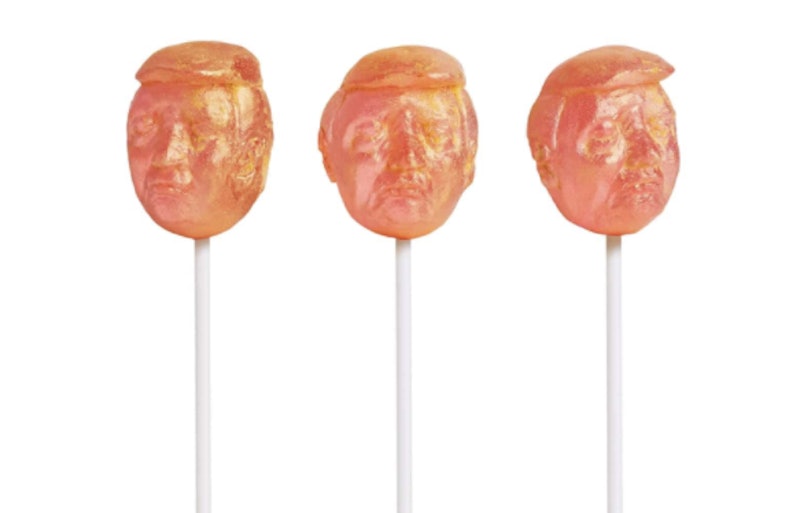 In President Donald Trump's America, pretty much any safe form of resistance is open to consideration, and those that involve candy are something pretty much everyone can get behind. Now resistance comes in the form of lollipops: A British candy company has made Trump into a lollipop, calling the candies "Trump Sucks." If that isn't enough to get you on board, all of the proceeds from sales will go to the International Planned Parenthood Federation.

The limited-edition lollipops are from U.K. company Smith & Sinclair, which also sells edible, alcohol-infused candy cocktails that look like gumdrops. Unfortunately, the Trump pops are alcohol-free, but since they're for a great cause, that can be easily overlooked.

According to the company's website, the pops are available in two delicious-sounding flavors: butterscotch and sea salt, and strawberry and mint. A cheeky tagline on the product description reads "take a moment with Trump that's easier to stomach than any other." I know that eating Trump's face may not sound like the most enticing thing, but considering the proceeds go to Planned Parenthood — which, as president, Trump has worked to defund — it's a good cause.

The candies are a small act of resistance and a way to fight back during the Trump administration's war on abortion access. One of the first executive orders Trump signed as president reinstated the global gag rule, also known as the Mexico City Policy, which prohibits the U.S. from sending international aid to NGOs that provide abortion information. That means that even organizations that do not actually perform abortions are not exempt. If abortion is even discussed with patients as an option, their funding can be pulled.

Since Trump's election, various anti-abortion pieces of legislation have been introduced in the U.S. Legislators in several states have introduced what is known as a "heartbeat bill," wherein abortions would be banned after about week 6 of a pregnancy, when a heartbeat is typically established. While these bills are so restrictive that they're unlikely to actually become law, the fact that they are being introduced by lawmakers is scary.

The heartbeat bills are sometimes introduced simultaneously with 20-week abortion bans. In this case, the thinking goes that if the heartbeat bill is seen as too harsh, the 20-week will seem more reasonable and be more likely to actually pass, as was the case in Iowa this week, when the House Human Resources Committee killed a heartbeat bill but passed a 20-week ban (one that could feasibly pass, considering the makeup of the Iowa state House).

All of this is pretty frightening, so it's nice to get a little levity in the form of Trump candies. The candies are a surprisingly accurate likeness of Trump that includes his much-discussed hair and signature scowl. The Butterscotch flavor is a shade of orange-yellow, which I bet was done on purpose. You can pre-order the candies on the Smith & Sinclair website for $6.23 plus $8.73 in shipping if you're located in the U.S.

Not only do the lollipops benefit a great cause, but also I would also imagine that it could be a very cathartic experience to be able to bite down on Trump's head. Any other candy companies that want to step up and create sweets we'll feel good about eating are welcome to do so.