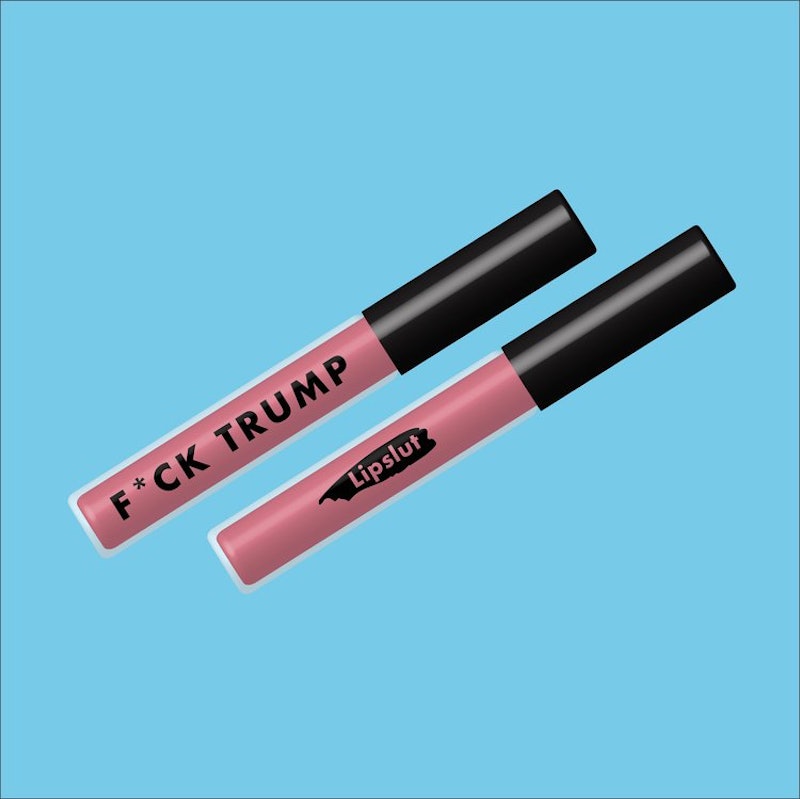 Since the 2016 Presidential Election, there has been a boom of fashion and beauty items that fight back for women's groups. None have ever been like this though. Created for a number of powerful reasons, Lipslut launched the F*ck Trump Lipstick. It's more than just a pretty color though. On top of the bold statement that it makes, this little lippie gives back to women's charities too.

There are tons of different fashion items you can shop to support women's groups. The beauty world might not have as many options, but the ones that are out there are pretty darn great. Lipslut, which, according to Teen Vogue, was created by Katie Sones, a junior in college at Cal Poly, San Luis Obispo. Looking to make a change in the world, she thought up the F*ck Trump Lipstick.

To start, the color is absolutely gorgeous. It's a neutral pink shade that will stand out and look great on a variety of skin tones. The product also give 50 percent of proceeds to a women's charity that has been threatened under the Trump administration. As of right now, there's no exact charity picked just yet. With every purchase, you are asked to pick your organization of choice and the winner will get the proceeds.

You have nine charitable options, including the American Civil Liberties Union, The Center For Reproductive Rights, Human Right Campaign, Planned Parenthood and National Organization for Women. You'll also be able to write in your own organization of choice to be taken into consideration. Lipslut says that the winner will be chosen at the end of their campaign, although they don't say when exactly that is.

According to the brand's website, Lipslut was created specifically because of President Trump and the cosmetics industry in general.

"Let’s just say we aren’t too pleased with our current socio-political landscape, and the standards of the cosmetics industry in general," Lipslut's website reads. "Chances are you aren’t either. Rather than complaining, we’re putting our money where our mouth is."

As of Mar. 28, there's only one color option on the site. Don't worry though, because this brand isn't stopped here. According to the website, the brand plans to come up with plenty more charitable products in the future.

"Offering one color allows us to keep our business practices lean and our visibility high early on," it says on the Lipslut website. "While we plan to offer a wide selection of shades soon, don’t fret; we’re certain it’s impossible to look bad wearing something called 'F*ck Trump.'"

Whether you're looking to stock up on great lippies or make a makeup statement, this is the perfect product for you. I don't know about you, but I can't wait to see what Lipslut thinks up next!

More like this
15% Pledge Director LaToya Williams-Belfort On The Impact Of Supporting Black Business
By Dominique Norman
Berriez Founder Emma Zack On Her Size Inclusive NYFW Show
By Dominique Norman
15 Must-Have September Beauty Launches, According To Our Editors
By Rachel Lapidos
Everything To Know About Daxxify, The Newest FDA-Approved Skin-Jectable
By Olivia Rose Ferreiro
Get Even More From Bustle — Sign Up For The Newsletter