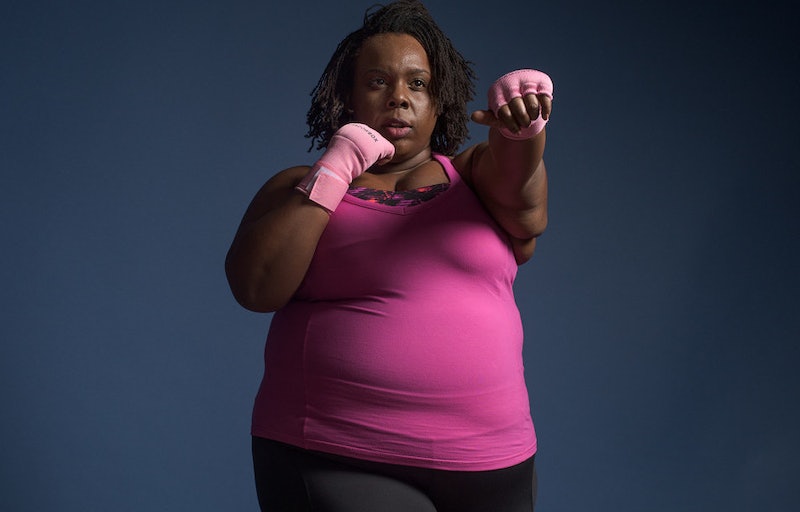 Body positivity went truly mainstream in 2015, and since then, various brands and magazines have made moves to embrace plus size folks. BuzzFeed's "Plus Size Athletes Talk About Their Lives In Sports" project aims to highlight plus size athletes whose bodies are outside the white, hourglass-shaped bell curve on which even lauded plus size models tend to fall.

"The idea for this project came about several months ago, in the wake of a number of athletic brands getting press for their 'body positive' decision to use a single plus size model in a campaign," Whelan tells Bustle in an email. "[F]or most of them, [that was] white, size 12-ish, hourglass-shaped models."

It's no secret the mainstream plus size beauty world isn't the best at stepping aside and listening to people of color, which is why it's so amazing to see how many of BuzzFeed's starring models for this piece are women of color.

In her interview with BuzzFeed, Valerio spoke frankly about the advantages and disadvantages of her body, saying, "My body shape and size is not an asset for fast running, but the fat that I have on my body is definitely helpful in terms of endurance — I can run, bike, and walk forever."

She continued, "I’ve faced some criticism, but it’s usually from people who are negative about everything; the sport is largely very inclusive. If you look at any race, you’ll see a range of bodies: tall, short, big, small, fat, whatever. Those bodies are out there doing their thing, and even if you don’t have what’s considered a typical ‘runner’s body,’ you can do it too."

Whelan says the models she sourced (mostly through recommendations from models already linked to the project) represent some of the diversity present in the world's plus size folks — the people brands should be making an effort to work with.

"There's value in meeting consumers where they're at, but after a few of these blatant PR moves in a row and the consequent fawning from every outlet afraid to miss out on covering a bopo story, it gets old," she tells Bustle. "I wanted to show brands what actual plus size athletes, not just agency models in a sports bra, looked like. If I can cast this with my very limited resources, surely they can do better."

Whelan wanted to take the project live in January because nearly one-quarter of Americans who make resolutions resolve to lose weight.

"I wanted[...] to present a counterargument to the exercise and weight-related rhetoric that's so common this time of year," Whelan says. "The implicit (and, plenty of the time, explicit) idea behind the 'new year, new you' narrative isn't just that you'll take up some kind of exercise that actually makes your body feel good, or helps you with your depression, etc. — it's that you'll exercise until you're significantly smaller. With these women, I wanted to both show their incredible athleticism, and put out the message that getting smaller doesn't have to be the point."

And her interviewees prove being smaller doesn't mean being fitter. Olisa, an exercise guru who makes plus size workout videos, told BuzzFeed, "I’ve always played sports, I’ve always been a dancer, I’ve always expressed myself through movement. But as a plus size person, I’ve downplayed my own athleticism at times because I don’t really fit the standard profile of an athlete."

She added, "So for me, embracing fitness no matter what my size is about breaking down that stereotype for myself. Now, I make plus-size workout videos, and have a whole part of my Instagram account dedicated to plus size fitness. I always say that I work out because I love my body, not because I hate it."

Across the board, interviewees expressed love for their bodies, and admiration for what they're capable of — something that's so necessary to see when stereotypes about fat folks still run rampant. Plus size people may have a little more positive visibility now, but that doesn't mean they can stop having open and honest conversations about what it's like to live as a fat person, including when they're struggling.

Whelan said Rodriguez, who returned to biking while dealing with postpartum depression, is someone she thinks will bring out that honesty in people.

"It's tough to go on the internet as a plus size woman at all, let alone do it while being completely open and vulnerable about your mental health," Whelan says. "I hope she inspires readers to be more honest about their struggles, too; she certainly inspired me."

In one of the piece's most powerful quotes, Rodriguez said, "I have always been big. I’m never going to be thin; I have accepted this. I’ve had eating disorders and an unhealthy relationship with activity in the past — but now, I’ve found a balance. [...] People have doubted my athleticism, but I live for the look on their faces when they see how fast or good I am at whatever sport. I’m not worried about being doubted anymore because I know what I’m capable of — just sit back and watch this shit."