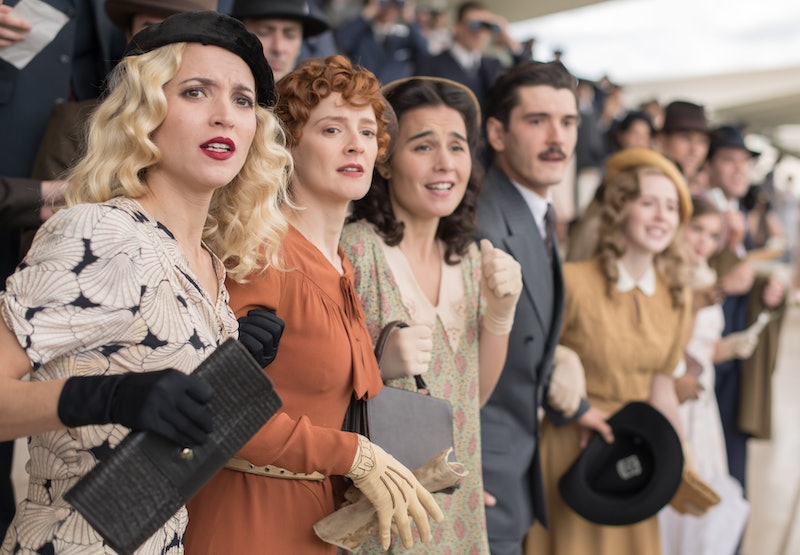 After years of love triangles, murder, and political intrigue, it's time to hang up the phones: the Spanish period drama Cable Girls is coming to a close on July 3. That means Cable Girls won't return for Season 6, ending a five season run that saw Lidia and her friends bond and grow during the tumultuous 1920s and 1930s in Madrid.

On Jan. 30, creators Ramón Campos and Teresa Fernández-Valdés announced that Cable Girls Season 5 would be its last, with the show seemingly reaching its natural end after a time skip to the Spanish Civil War. This makes Cable Girls their longest running series, followed by Velvet and Netflix's High Seas. The duo has already moved on to producing Jaguar, a Netflix series set in 1960s Spain that also features Lidia actor Blanca Suárez in the lead role.

“Four years ago, Cable Girls meant for us the beginning of a great adventure, and we cannot be more proud of the worldwide reception it has had season after season," Diego Ávalos, vice president of original content in Spain, told Living Backstage. "We are eternally grateful to the cast and the entire team."

"Saying goodbye to Cable Girls is to say goodbye to one of the most important series of our career," Fernández-Valdés told Living Backstage. "We can never forget that it was the first Netflix series in Spain, and that on arrival they trusted us as producers. It was a gift and a dream fulfilled."

While Cable Girls drew viewers in with posh outfits and dashing CEOs, the heart of the feminist show has always been an exploration of female independence and suffrage, gender identity, sexuality, and sisterhood. Cable Girls made a space for itself as a subversive drama with its ability to look like a soap opera, while slyly tackling progressive issues.

The central plot revolved around the Cifuentes' national telephone company, which hired women as switchboard operators while the men ran accounting, engineering, and management. It was between the walls of the switchboards that the lives of Lidia, Marga, Carlota, and Ángeles intersected. While Lidia, formerly known as Alba, took up the job because she was running from the law, the rest of the women saw the telephone company as a way to gain independence from their overbearing fathers or abusive husbands. As they fought against the restrictions of a patriarchal society, they found friendship, and even love, with each other.

Amid the romantic entanglements, Lidia and co. became more aware of how to use their voice for positive change. They organized a walkout when management threatened to eliminate their jobs. They became more vocal in their support for women's suffrage (which passed into law in 1931, but was taken away in 1936 by dictator Francisco Franco and not restored until 1977) and the right to divorce (similarly passed and then banned). They became mothers, politicians, accountants, revolutionaries, and gangsters.

Cable Girls was also progressive in its portrayal of sex, as Lidia freely pursued both flirty Carlos and reserved Francisco, with the show condemning her for neither. In one scene, Marga read Chaucer's The Canterbury Tales and learned how to make sex enjoyable for herself, and not just for her husband. Ángeles learned how to feel desire again — and even use it to her advantage — after a years-long relationship with an abusive ex. And Carlota entered into a nuanced polyamorous relationship with Miguel and Oscár, a switchboard operator who later identified as a transgender man. Cable Girls makes it clear that the attraction is mutual between all parties, and it only falls apart when Miguel's personal problems push Carlota more into Oscár's arms.

Oscár's journey towards feeling comfortable in his identity was similarly sensitively done, beginning with him secretly renting out a hotel room just to try on menswear away from prying eyes. It's heartbreaking when the oppressive Nationalist regime forces Oscár to fall back into a cisgender identity, but Cable Girls never shied away from how showing how patriarchal political and economic forces hurt the most marginalized people in Spanish society.

All in all, Cable Girls delivered the steamy romances right alongside feminist commentary. It was flirty and fun, but it was also educational, eye-opening, and ultimately, empathetic. It leveled up what people might imagine soap operas can be, and it will be dearly missed.