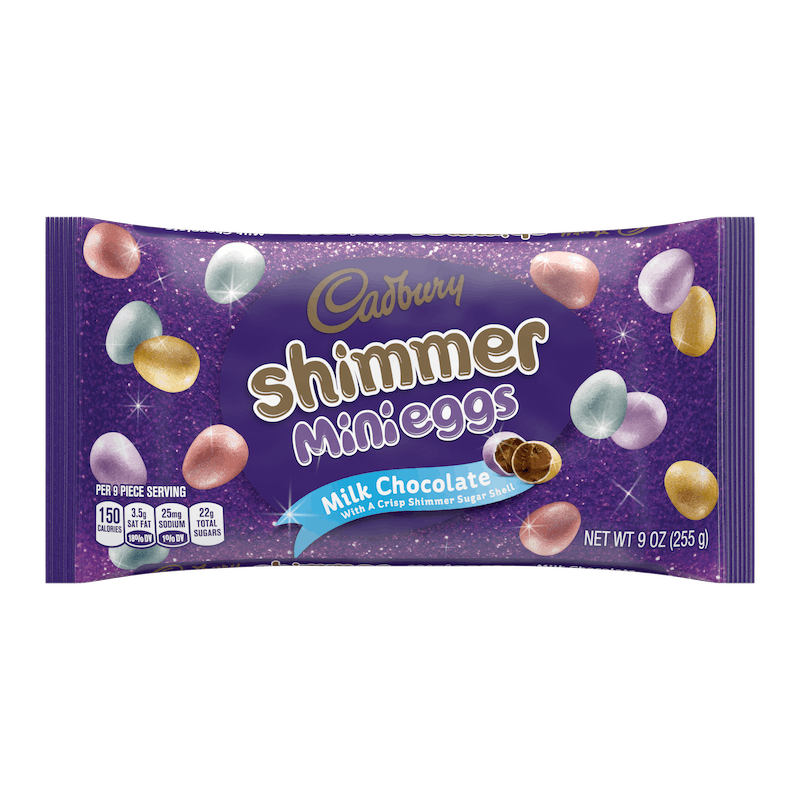 It's true that we do have several more holidays to get through before Easter has its turn in the spotlight — but that’s not stopping some brands from launching their springtime and Easter-themed offerings already. Cadbury, for example, just introduced us to a new twist on an old favorite: Cadbury Shimmer Mini Eggs are here — not “on the way”; not “soon to arrive”; they are here, right now — to make your Easter the most extra it’s ever been. These aren’t just standard, run-of-the-mill Cadbury Mini Eggs; oh no. They’re sparkly.

I did not realize that sparkly chocolate eggs were a thing I wanted until they suddenly appeared in my life. Way to anticipate my desires before I even knew I had them, Cadbury. Well done.

Although Cadbury has been around since the early 19th century — founder John Cadbury first opened a shop that sold tea, coffee, and hot chocolate in Birmingham in 1824 before beginning to produce his own chocolate products in 1831 — Mini Eggs weren’t introduced until 1967 by most accounts. Unlike the larger Cadbury Crème Eggs, which were originally launched in 1963 as Fry’s Crème Eggs (the treats were rebranded in 1971), Mini Eggs are made of solid chocolate instead of filled chocolate shells; they’re then covered with a crunchy candy coating, making them more like really big Smarties or M&Ms than anything else. But although they’re perhaps not as iconic as Crème Eggs, Mini Eggs have a loyal following all the same — and for those who love them (that would be me), they’re even more covetable than Cadbury’s other Easter treats.

And now, we’ve got a new variety to munch on as the weather begins to get warmer (or at least slightly less snowy). Cadbury Shimmer Mini Eggs taste like the same crispy, chocolatey treat we know and love — but instead of a simple, pastel-colored, matte coating, they’ve got a sparkly, shiny one instead. The eggs come in four colors: Pink, yellow, purple, and blue. Very spring-y, no? Even if they are a bit of a departure from the current lineup of regular Mini Eggs. (In the United States, Mini Eggs come in white, yellow, pink, and blue — no purple in sight.)

The best part? They’re already available. According to the Daily Meal, Shimmer Mini Eggs began arriving on shelves at the beginning of January; indeed, food Instagrammer Candy Hunting noted in a post dated Jan. 3 that they’d located them at Target. What’s more, you can currently order them online from retailers like Walmart, Candy Warehouse, and Amazon. (Note that the Amazon listing is from a third-party seller.) A representative for Cadbury tells Bustle that they have suggested retail prices of around a dollar for 1.4-ounce bags and $3.89 for 7 to 9-ounce bags.

Cadbury Shimmer Mini Eggs will be available at a wide range of retailers through the Easter season (Easter itself being April 21 this year), so be on the lookout for these bright and shiny treats. Happy munching!