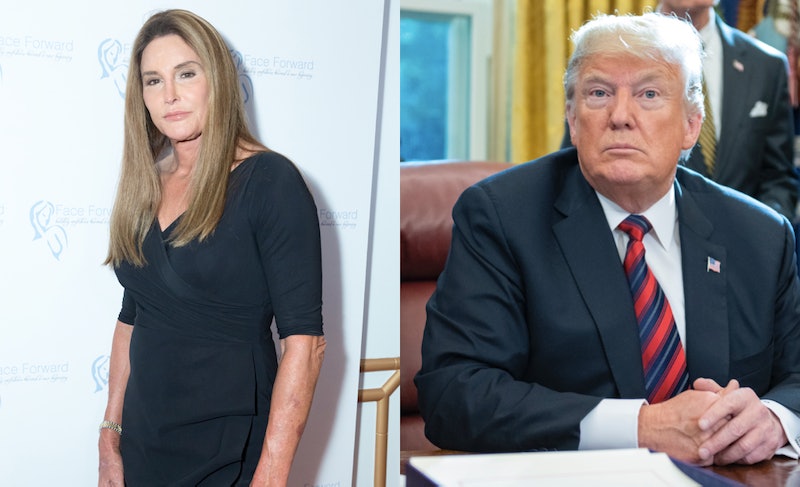 As part of its larger effort to eliminate protections for transgender Americans, the Trump administration is weighing a plan to legally define gender as an immutable status determined biologically at birth, according to a leaked memo from the Health and Human Services Department. In an op-ed for the Washington Post, Caitlyn Jenner ripped Trump's transgender memo, and expressed regret for supporting Trump and the Republican Party for the past several years.

"I believed I could work within the party and the Trump administration to shift the minds of those who most needed shifting," Jenner wrote. "Despite the criticism I received from segments of the LGBTQ community for engaging with this administration, I remained hopeful for positive change."

This reflects the same general attitude Jenner expressed in 2016, when she explained her support for the Republican Party at a GOP brunch in Cleveland.

“I get it. The Democratic Party does a better job when it comes to the LGBT and trans community and all of that,” Jenner said the event. “The Republican Party needs to understand. They need to know people who are trans.”

Jenner made those comments during — and just blocks away from — the Republican National Convention. At that convention, the Republican Party approved a platform that denounced same-sex marriage and accused LGBTQ activists of launching "hate campaigns" against conservatives. It contained no mention of transgender rights, or transgender Americans at all.

By contrast, the Democratic Party's platform from that same year included an entire section on "Guaranteeing Lesbian, Gay, Bisexual and Transgender rights." Democrats pledged to fight "the crisis of violence against transgender Americans," denounced businesses that "refuse to serve transgender people," and promised that Democrats will "fight for comprehensive federal non-discrimination protections for all LGBT Americans."

But despite heavy criticism from LGBTQ activists, Jenner made it clear that she was a Republican loyalist, telling an Australian radio host in March 2016 that she'd vote for "whoever is the Republican candidate." As the nomination contest was winding down, Jenner told STAT Magazine that Trump "seems very much behind the LGBT community," while she called Hillary Clinton a "f*cking liar" who's "done nothing" in her life.

"Sadly, I was wrong," Jenner wrote on Thursday of her high hopes for Trump. "The reality is that the trans community is being relentlessly attacked by this president. The leader of our nation has shown no regard for an already marginalized and struggling community. He has ignored our humanity. He has insulted our dignity. He has made trans people into political pawns as he whips up animus against us in an attempt to energize the most right-wing segment of his party, claiming his anti-transgender policies are meant to 'protect the country.' This is politics at its worst. It is unacceptable, it is upsetting, and it has deeply, personally hurt me."

Acknowledging that she needs "to listen more to the members of the LGBTQ community and to learn more," Jenner wrote that she is "more determined than ever to find the best way to bring trans issues to the fore of our social and political conversation."