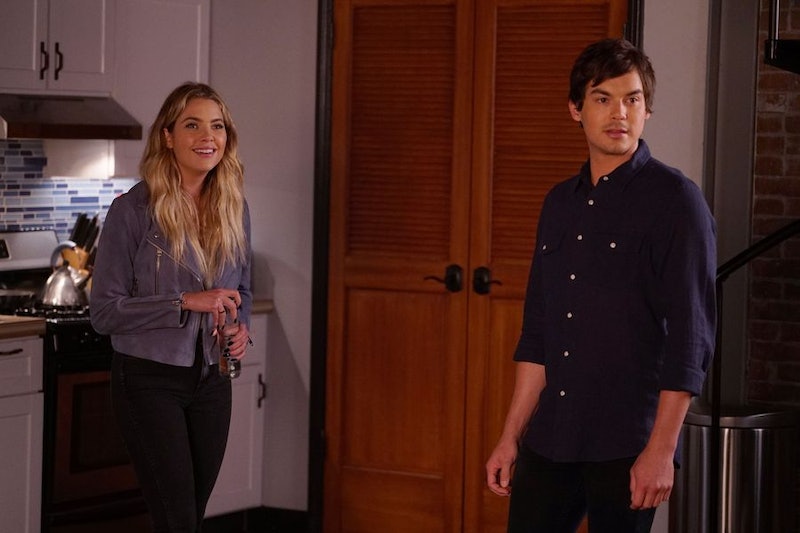 The moment we’ve all been waiting for is here! Hanna Marin and Caleb Rivers are engaged! Hooray! They drifted apart for a little bit there (and that whole Spoby thing happened, which, eh), but Pretty Little Liars’ best couple is now going to be a couple forever. In fact, Hanna and Caleb got “married” on Pretty Little Liars, and I’m not even mad that it wasn’t a real wedding.

The big moment happened when HBIC Ashley Marin came back into town to make sure that Hanna was okay. Personally, if she wants to know if her daughter is okay, she needs to just live with Hanna, because Hanna is never, ever okay. She’s always embroiled in drama, but I digress. But Ashley asked why Caleb was back in Hanna’s life (in like, a nice way…) and Caleb said that he actually came back because he needed Hanna’s help because he needed to realize that they were supposed to spend the rest of their lives together. Swoon. And then he told Ashley that he wanted to marry Hanna and I swooned again. I didn’t cry like Hanna did… there weren’t tears shimmering in my eyes and ruining my mascara, okay? I have allergies. It’s all the ragweed.

To up the romance factor, Hanna and Caleb went camping with champagne and then they gave each other paper rings to signify their love for each other. Then they kissed and I rejoiced. Caleb told Hanna that he would marry her right there if a bear could be ordained to marry them (haha, forest jokes…), and it was amazing. Move over, Aria and Erza (who don’t seem to be doing so well anyway) — Haleb is back to claim their throne, and these two are going to be bonded together for life. I can’t say the same about Ezria.