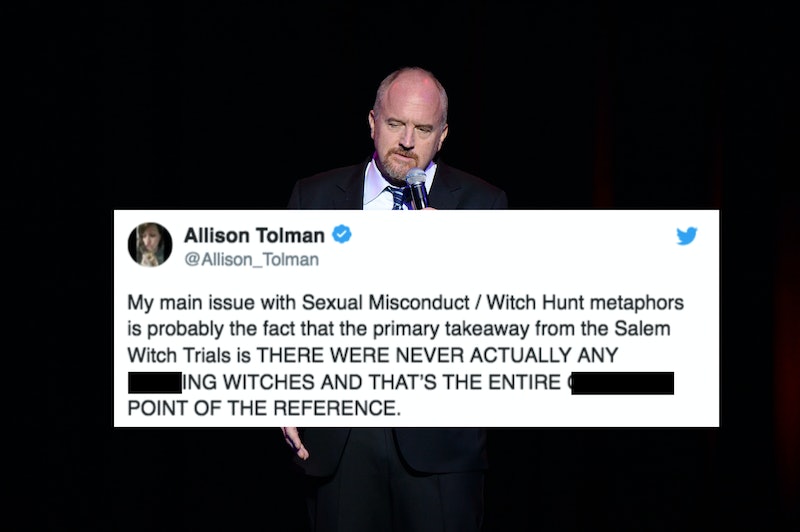 After The New York Times published a report claiming Hollywood film producer Harvey Weinstein had allegedly sexually harassed and assaulted women for decades, dozens of other women and men have come forward with their own allegations of powerful men acting as sexual aggressors. (For his part, Weinstein has denied accusations of nonconsensual sex and apologized for "the way [he has] behaved with colleagues in the past.") In a turn of events that will not surprise anyone familiar with Western society, on the heels of these accusations came a slew of witch hunt metaphors. These comparisons, which are almost invariably put forth by male commentators, confuse modern men being publicly accused of alleged sexual harassment for women in ye olden times being literally tied to stakes and burned alive for slights men decided they committed in accordance with their blood oaths with the Dark Lord Satan. So, like, same thing, right?

While many of us might recognize this as an absurd parallel to draw, some don't seem to agree. The most famous of these men would probably be director Woody Allen, who himself has been accused of alleged sexual abuse in the past. (Allen has repeatedly denied these allegations.) Speaking to the BBC in October, he described the Weinstein allegations as "sad and tragic" for everyone involved, including Weinstein, and warned against a "witch hunt atmosphere... where every guy in an office who winks at a woman is suddenly having to call a lawyer to defend himself." Following public backlash, Allen later clarified his comment, calling Weinstein a "sick man."

Unfortunately, Allen isn't alone in his initial assessment of the situation. In light of the many, many public figures and opinion columnists who have declared the rash of allegations to be a "witch hunt" — including actress Kirstie Alley and a member of Senate candidate Roy Moore's campaign staff — Fargo and Downward Dog actress Allison Tolman recently took the opportunity to remind everyone what actually happened during the Salem witch trials.

As Tolman so succinctly puts it, "THAT'S THE ENTIRE GODDAMN POINT OF THE REFERENCE." During the Salem witch trials, people were prodded with needles, tied up and thrown into bodies of water to see if they would sink or float, and hanged by the neck until they died. Local magistrates even interrogated one accused woman's four-year-old daughter for weeks until the child broke down and told them what they wanted to hear: That her mother was a witch. This "confession" was taken as sufficient evidence to convict the woman, Sarah Good, and by the end of the summer, Good had been hanged. In short, comparing a situation to a witch hunt implies that the accused are being ostracized, tortured, or executed based on mass hysteria. So far, the harshest repercussion faced by anyone recently accused of alleged sexual misconduct has been getting fired. There's one strike against the witch hunt metaphor.

Strike two would be the lack of hysteria. As Tolman points out, this is where the metaphor totally fails. Witches (probably) aren't real. Sexual harassment is.

Yet "witches" are the ones who have been punished throughout history, while the vast majority of people accused of sexual harassment or assault never see the inside of a courtroom, let alone a jail cell. According to RAINN, only 310 out of every 1,000 sexual assaults are reported to the police, and in the end, only six rapists will actually be incarcerated. Again and again, those who have experienced sexual misconduct have to live with the consequences long after their sexual aggressors move on with their lives. Strike three.

In response to Tolman's tweets, women and men alike applauded her for pointing out the false equivalency — sometimes literally, in the form of a GIF.

One Twitter user pointed out that the choice of metaphor is even more ironic in that women and their credibility were disproportionately targeted during actual witch hunts. A closer look at the ranks of accused witches makes it clear that these hunts were used to justify punishing women who were oppressed or defied social norms: outspoken old women, homeless beggars, and slaves. By contrast, many of the men targeted by the supposed "witch hunt" of 2017 are powerful and privileged.

The similarities between witch hunts and the current slew of sexual misconduct allegations begin and end with one thing: They are both historically significant moments. These accusations are not fueled by mass hysteria; they are the product of a culture that pardons sexual harassment and assault on a daily basis. Let's hope they have a better outcome for women than the true "witch hunts" of the past.