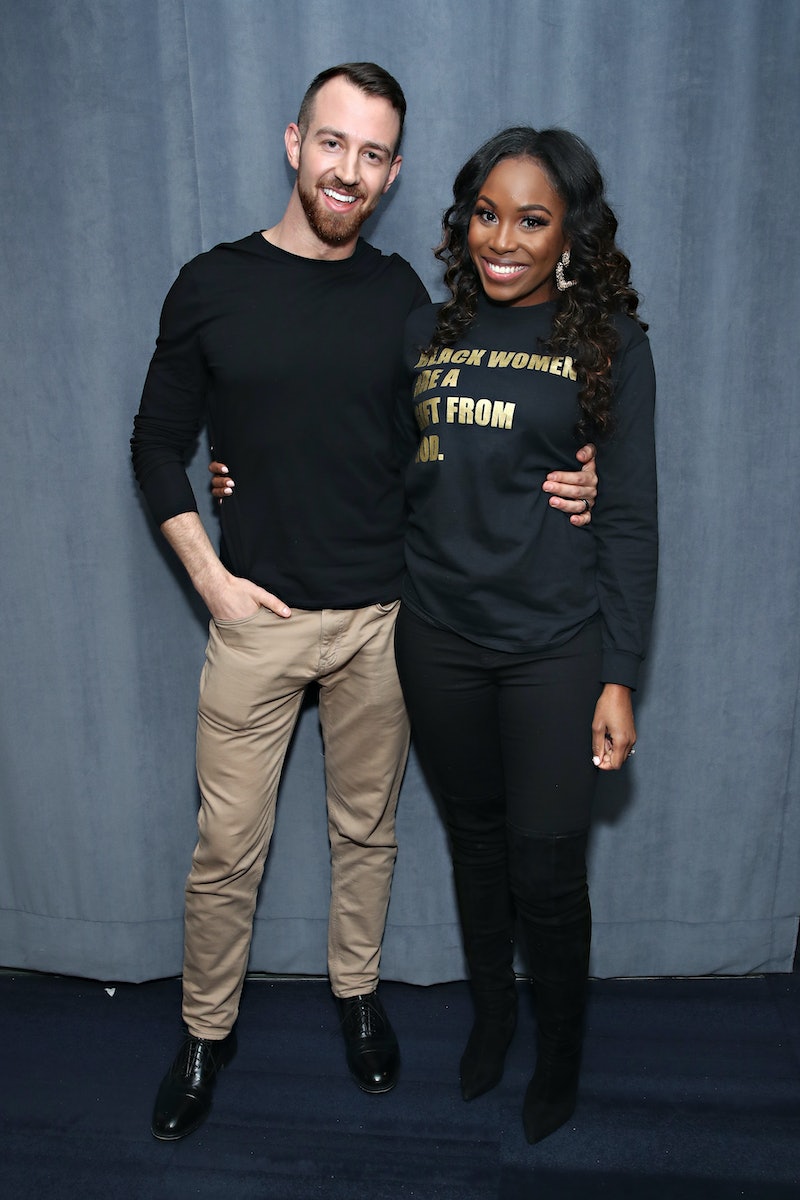 Now that Season 1 of Netflix's hit reality show is finally over, Love Is Blind stars Lauren and Cameron are launching a YouTube channel, meant to keep viewers updated on life after the show. Lauren and Cameron got engaged after participating in the hit dating series without ever having met in-person, and are one of the few couples from the show to remain together. And while there's been plenty of talk about a Lauren and Cameron potential spinoff, it looks like these two aren't waiting around for a TV deal.

Despite their unconventional meeting, the newlyweds are still happily together more than a year after their reality TV show wedding. And their new YouTube show, titled Hangin' With the Hamiltons, will give fans an inside look at their life together, including their new dog, Sparks, as well as thoughts on traveling, friends, and marriage. "Let me just start off by saying that I am so glad you guys came to join us,” Lauren says in the trailer. "Whether you are returning from before, you’re familiar with our story, or whether you just found us and you’re new to our house, we are happy to have you."

Cameron adds, "All of the kind words and people relating to our story it’s just awesome to see."

In the trailer Cameron promised that the two would discuss, "everything in our lives" including "family, our friends, dinner, drinks, cocktails, you know what I’m talking about." Lauren added that they also planned to talk about "interracial relationship stuff," joking that the couple would get open up about "black women stuff, white man Cameron stuff, whatever.” Cameron agreed, saying they're open to talking about anything: "We're just going to talk about it from our realest perspective."

Since Love Is Blind finished production in fall of 2018, as per CNN, fan-favorites Cameron and Lauren have actually been married for about a year and a half. They had to keep their relationship private and off social media to not spoil the end of the show, but now they're ready to spill all the tea.

Not only are they ready to share more of their story with the world, they're also thinking about getting married — again. Lauren and Cameron hope to have a more traditional wedding. "We couldn’t bring everybody to the on-camera ceremony like we wanted to," Lauren told People. "But we definitely want to plan that and involve as much of our family as we can."

If the couple do decide to have another wedding, odds are it might be a more personal, off-camera affair. Yet, given the couple's new YouTube channel, it's possible fans might get at least a glimpse inside the event after all.

More like this
Love Is Blind’s Natalie Claims Shayne Signed Up For 'Perfect Match' While They Were “Still Together”
By Brad Witter
Everything To Know About 'The Real Housewives Ultimate Girls Trip' Season 4
By Jake Viswanath
Andy Cohen Apologized To Larsa Pippen After A 'RHOM' Season 5 Reunion Dust-Up
By Brad Witter
Brittany Snow Files For Divorce From Tyler Stanaland After 'Selling The OC' Drama
By Grace Wehniainen and Radhika Menon
Get Even More From Bustle — Sign Up For The Newsletter
From hair trends to relationship advice, our daily newsletter has everything you need to sound like a person who’s on TikTok, even if you aren’t.