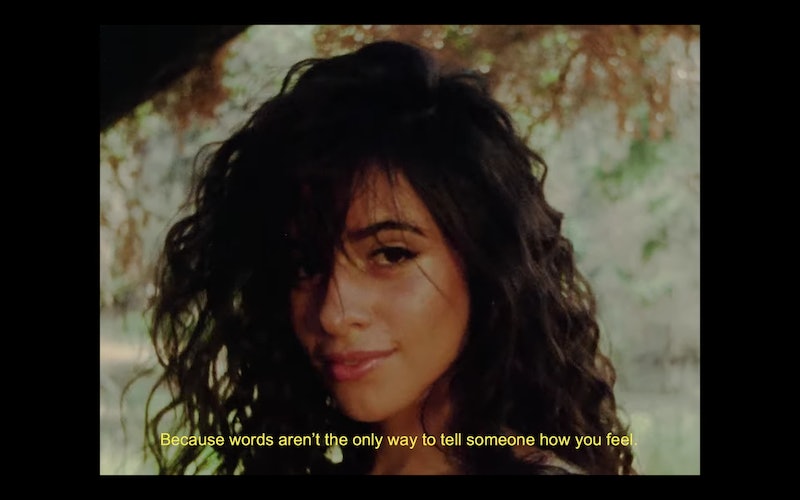 On Saturday, Aug. 31, the singer posted a video titled "What Do I Know About Love?" on YouTube, which features Cabello wandering around gorgeous landscapes and staring pensively off camera while reciting a poem about finding and losing love. "What do I know about love? Nothing," Cabello begins the video. "Where does the love go when it runs out? When does it leave? Why does it die? Do you kill it in one violent blow? Or is it a million unattended, unhealed little cuts and scratches?"

Later, the singer talks about the power of love, saying, "I know when you call in love you feel like you’re the first and only two people in the world. Every kiss, every touch, every caress is like something you feel nobody has ever felt before." Fans have already started analyzing the video, attempting to find the meaning in Cabello's cryptic video — and the fact that Shawn Mendes' social media handles were reportedly linked in the description. (Mendes' links have since been deleted.)

In addition to many fans speculating that "What Do I Know About Love?" might be a visual album or even just the title of her second album, many more fans pointed out that Cabello's new video is likely a just a tease for her next single. Shortly after the singer's video was posted, Twitter account PopHub tweeted that Cabello's next single will reportedly be released on Thursday, Sep. 5, based on a report from the UK newspaper The Telegraph.

Cabello has been teasing that her second album will be inspired by her life, and everything that she has experienced over the past few years, including a relationship and breakup with Matthew Hussey and her rumored romance with Mendes. In June, she shared an emotional post on Instagram, in which she told fans that her next album will be incredibly personal. "It feels really surreal and powerful that I can listen back to my life over the past year," Cabello wrote. "I hear my f*cking soul in these songs. I can see the memories in them. It’s extremely painful, beautiful, cathartic, and just a sh*t show of emotions, but it’s the reason I love this."

A few months later, Cabello told Variety that she wrote about real experiences and relationships on her sophomore album, rather than the "faraway crushes" that inspired her debut. "Falling in love is like an infinite amount of levels and layers and angles. I fell in love and just opened up," she told the outlet. "Everything was written in present moment."

While Cabello's cryptic new video likely inspired more questions than answers among fans, it's clear that the singer is getting ready to bare her soul on her next album — and it seems like love will play a major role in Cabello's new music.

More like this
Willow Smith & Camila Cabello’s “Spiritual Experiences” Led To “Pyschofreak”
By Grace Wehniainen
Who Is Bad Bunny Dating? Gabriela Berlingeri's Vocals Are Featured On His Song "En Casita"
By Radhika Menon
Demi Lovato's New Song "29" Hints At Their Age Gap From Ex-Boyfriend Wilmer Valderrama
By Jake Viswanath
Beyoncé & Jay-Z's Relationship Timeline Proves They're Still "Crazy In Love"
By Jake Viswanath
Get Even More From Bustle — Sign Up For The Newsletter