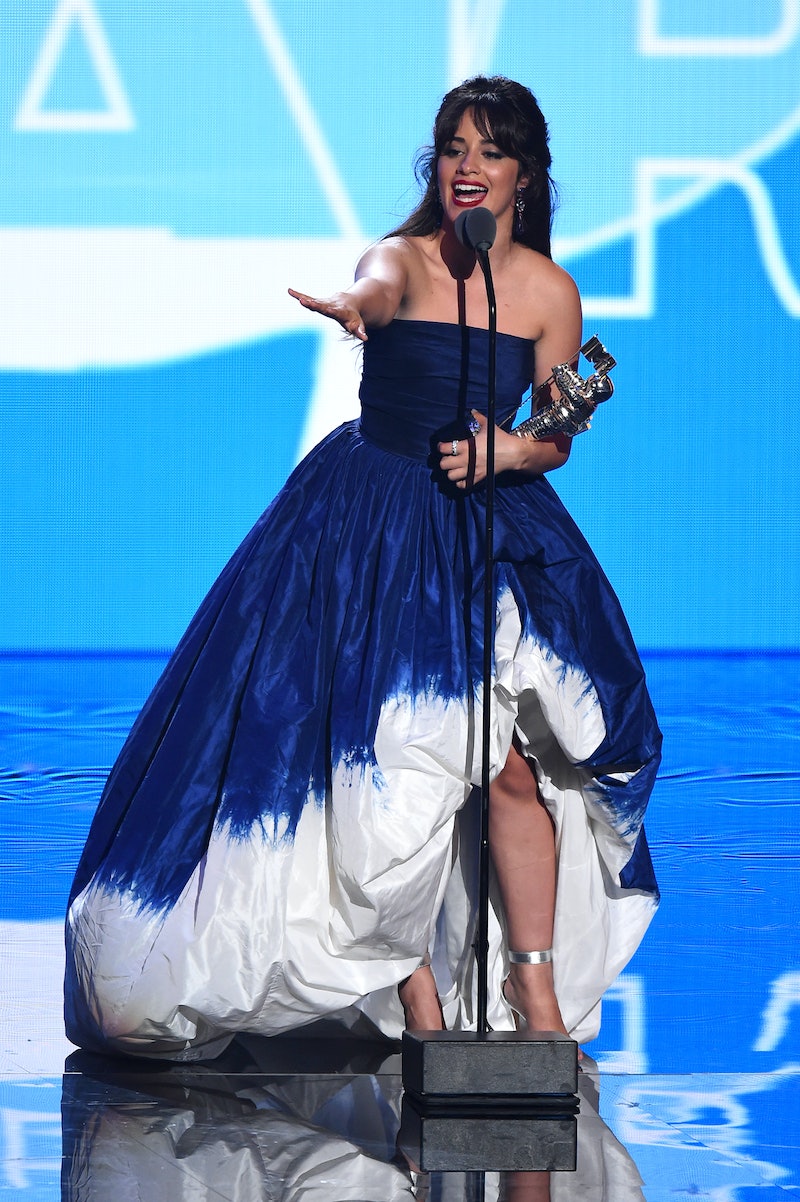 After winning Artist of the Year and Video of the Year at the 2018 MTV Video Music Awards on Monday night, it's safe to say that Camila Cabello was walking on cloud nine. However, the former Fifth Harmony member found a way to make the victory event sweeter by sending a message to her past self about the huge success in her future. In short: Camila Cabello's tweet about her VMA win should serve as absolute proof that dreams really can come true.

The singer took to Twitter shortly after accepting her Moon Person and replied to one of her old tweets from all the way back in 2012, where she said how much she wanted to attend the VMAs someday. "#VMA2012 I wanna be there SOOOOOOO bad you dont understand #someday," the tweet read. Six years later, Cabello took the opportunity to show just how much things have come full circle for her by responding to her past self, writing: "You're not gonna believe this smol Camila but in 2018 Madonna is going to give you an award for video of the year and your acne will clear."

Of course, this wasn't the first instance that Cabello showed how grateful she was to be awarded such a high honor. During her speech, she took a moment to credit Madonna for being such an inspiration to her and thanked her family and fans for all of their unending support. “This is… my hands are literally shaking. I’m never going to forget this moment,” she said. “Madonna, I love you so much. ...You’ve inspired me so much. I love you, seriously. This moment is so surreal."

Cabello was clearly caught off guard by her win, but luckily she remembered to thank the most important people: her family, her fans, and, of course, Madonna once more. “I want to thank my family, who inspired this music video, I want to thank my fans,” she added. “I dedicate this to Madonna.”

All in all, the night proved to be a magical evening that Cabello has been dreaming of for quite some time. And now that aspiration has become a reality, which is something Cabello is clearly grateful for.

It's always difficult to know what to expect at the VMAs, or any awards show for that matter. And while the night certainly had more than a few cringeworthy moments, this was definitely a highlight of the evening, as was Cabello's equally exciting Artist of the Year win, which she dedicated to her fans:

And being the admirable person that she is, she also took a moment to praise her fellow nominees for their sheer and raw talent:

"I wanna say it's incredible, I'm so honoured to be in a category with such incredible nominees, especially the female nominees that are in the category this year, Cardi B, Ariana, Nicki (Minaj)."

So congrats to both the past and present form of Cabello. It's an honor you both deserve.