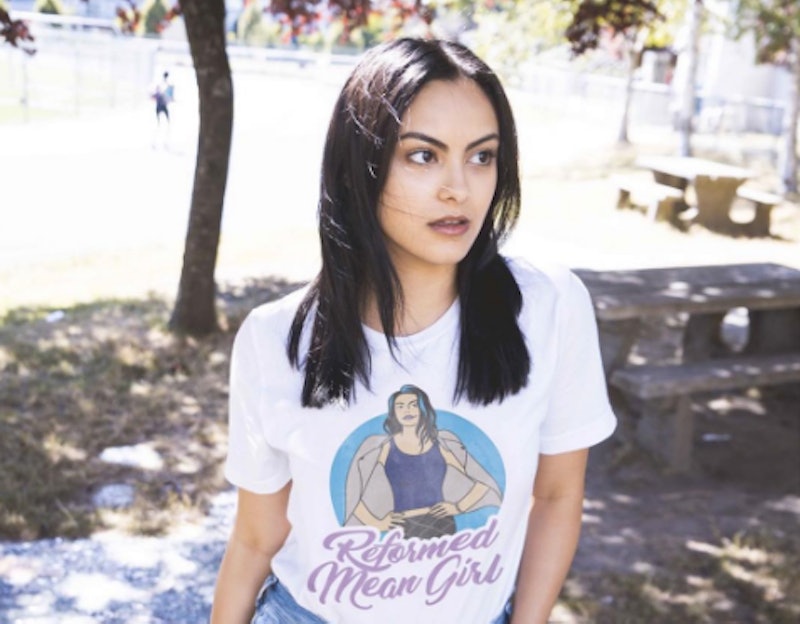 If there's one thing that Veronica Lodge taught fans of Riverdale, besides how to rock impeccable style, it's that it's never too late to be kind. Now you can wear that philosophy right on your sleeve. Camila Mendes teamed up with Represent to design a "Reformed Mean Girl" tee in honor of kindness and anti-bullying. The shirt spreads a positive message and gives back, while still being super on trend. It doesn't get much better than that.

There's no one better for this kindness collab than Mendes. Her on-screen character is known for going from a once-bully to a woman with a heart of gold, and this mini collection represents that transformation perfectly.

The line of two t-shirts and a sweatshirt feature a photo of Veronica Lodge along with the words "Reformed Mean Girl" on them. It might be a small collection, but it has a mighty message.

If you were ever a "mean girl," it can be shameful to admit that bullying past. But being a "reformed mean girl" means you have taken steps to change your ways — a noble undertaking that's deserving of pride. And this T-shirt let's you wear add that accomplishment of personal growth to your wardrobe.

Each "Reformed Mean Girl" top will donate a portion of proceeds to the Kind Campaign — a non-profit organization, documentary film project, and school program that raises awareness of girl-against-girl "crime" and promotes healing for victims of bullying.

The "Reformed Mean Girl" shirts are available right now on the Represent website. The short sleeve options are $24.99 each, while the long-sleeve sweatshirt will set you back $39.99. It's not a bad price for spreading such an amazing message.

According to Mendes' Instagram post about the line, the shirt will only be available for two weeks. That means you have until Oct. 2 to get the design. But just because it will be available for that long doesn't mean that they won't sell out. Needless to say, it's better to buy one sooner rather than later if you want to proclaim your anti-bullying status.

Every single shirt ships worldwide, and all styles are available in size XS to 4X. That is a pretty inclusive line because second chances aren't size exclusive.

In season one of Riverdale, Mendes' character Veronica Lodge explains to her friends how she once bullied another girl so badly that she left school. To try an redeem herself, Lodge goes out of her way to help Ethel Muggses when she sees that she doesn't have many friends.

According to PACER, one out of every five students reports being bullied in school. While one shirt won't change school climates, it's a heck of a good way to start a conversation about bullying. After all, being the "mean girl" or "bully" isn't cool, but stopping your harmful bullying behavior is undeniably awesome.

Even after this limited edition shirt has come and gone, you can donate directly to the Kind Campaign to keep anti-bullying messages going strong. Because every student deserves to feel safe at school.

While we're on the topic, the second season of Riverdale is coming on Oct. 11. There's no telling what will happen to Lodge and her crew, but I'm hoping that tons of people will be wearing this tee when it airs. Between the message and the trendy design, you really can't go wrong. And, hey, maybe it will even make an appearance on the show, too.

And finally, if you ever think about being the bully, just think to yourself, "What Would Veronia Lodge Do?" Chances are she'd choose being supportive over being cruel any day.