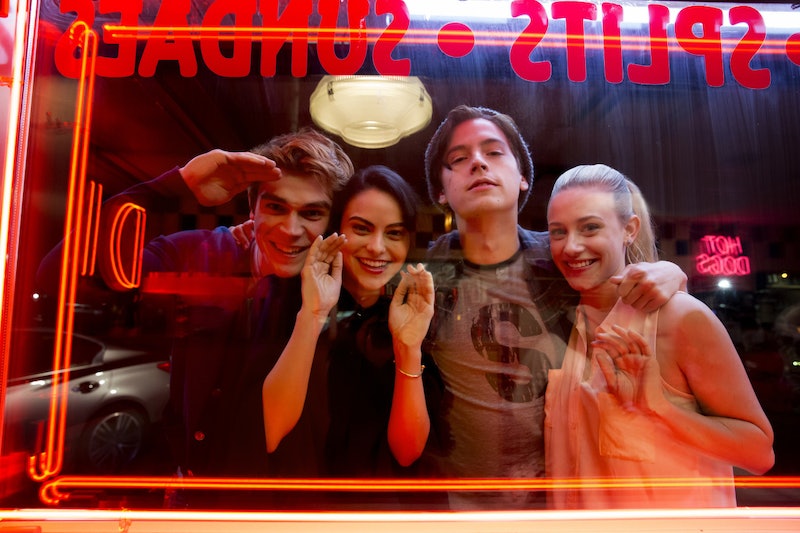 I'm rarely used to seeing accurate — or bare minimum, non-sexualized —portrayals of teen girls on TV. Objectification intersects too naturally with women in media of any form, so color me doubly surprised when I happened upon Riverdale and its lead female characters, Betty and Veronica. You see, Riverdale is making Betty and Veronica into feminist heroes, which is admittedly a recent trend on the CW, but that hasn't always been the case. Adding Betty and Veronica to a group of CW female characters like Rebecca Bunch (Crazy Ex-Girlfriend), Jane Villanueva (Jane The Virgin), and Kara Danvers (Supergirl) has helped to subvert our expectations of these young women within the context of the show — a soapy teen drama — and within the context of the network, which skews toward teens and young adults. As a longtime viewer of such shows, I can attest that what Riverdale is doing with these two amazing female characters is rarely seen in this genre.

When Veronica became the target of a slut-shaming plot, Betty was right there to defend her (and the other young women at Riverdale High who'd been targeted). When Betty was unsure of her worthiness to be on the cheerleading squad or subsequently felt unworthy of Archie's affection, Veronica supported her, boosted her confidence, and tried to help her find her own voice. After only a few episodes, these young women are not merely cheerleaders — they're each other's cheerleaders.

If we widen our gaze to where these women fit in the Riverdale line-up, another interesting image emerges: a world where two young women are (arguably) more well-rounded and better characterized than their male counterparts. Discussing how Archie has been objectified and at the center of an awful statutory rape plotline is for another article, but it's hard to ignore that the "teen Outlander" vibe Veronica dubbed him with has permeated how we, the audience, are meant to perceive him.

Riverdale should be Archie's show. Keyword: "should." Yet he is currently Riverdale's Dawson Leery — the cute, vaguely tortured, locally sourced good guy who is in the middle of the action, but never really the most interesting thing about it. Archie is written so that he is never very compelling when he is by himself. When he's in his bedroom, it's through Betty's window (implying we see him through her eyes and thus, he is defined by her gaze). He has to go for nighttime jog to Ms. Grundy's house at one point, rather than be alone with his feelings. Hell, he's not even a meaningful musician until Josie & the Pussycats take an interest in helping out.

Archie's blandness and his tendency to become a sex object (interestingly, two of the things that often happen to young women in TV) have become some of his defining traits. While Betty and Veronica are interesting to watch even when they are alone, it's tough to say whether Archie is interesting enough when he's not sharing the screen with someone else. Being a brooding aspiring musician does not a great protagonist make.

Barely half a season in and Archie is still just a hot, sad guy. The same goes for the other men of Riverdale, to a certain extent. Jughead is a lone wolf, Capote-esque local reporter. He's barely in cahoots with Betty, Veronica, and Archie yet (which the show will ostensibly fix). Jughead definitely hasn't been given the amount of secondary character development as that secondary Riverdale women, like Hermione Lodge and Josie McCoy. The same can be said of Kevin Keller, who sadly is still slogging through "gay best friend" territory. Feel free to correct me, but after four episodes, he has yet to be in a scene where his sexuality or semi-campness (as exhibited through Riverdale's niche pop culture references) isn't brought up.

So, it would appear that Riverdale has done something that teen TV shows often don't do: put a laser-focus on really developing the female characters (and moving them away from potential archetypes), while sidelining or underwriting the male characters. Where previous CW shows like 90210, Gossip Girl, and The Vampire Diaries have either created emotionally fraught female friendships, pigeonholed their teen heroines into archetypes (hot b*tch, queen bee, sweet girl-next-door, tortured artist, etc.), or focused on the good girl vs. the bad girl, Riverdale is doing the opposite. Betty and Veronica matter just as much, if not more, as their guy friends. Better yet, they are contributing meaningfully to driving the plot, which is a breath of fresh air.

At this point, all I know right now is that Riverdale's biggest draw is — and who woulda thunk it — Betty and Veronica. How's that for a plot twist?

Editor's Note: This article has been updated to reflect that Archie is seen through Betty's window on Riverdale.