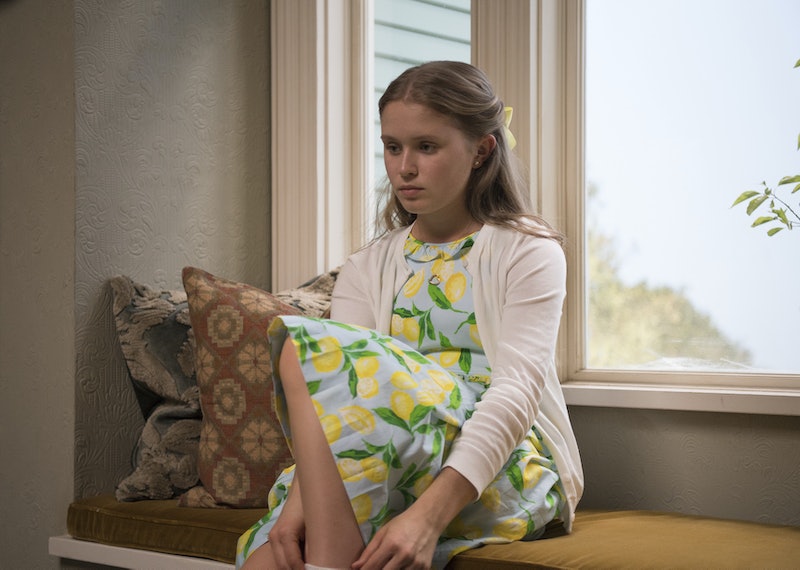 HBO's Sharp Objects is another perfect show for TV fans who jump at the opportunity to dissect every frame, slight facial expression, and offhand comment in order to figure out what the murder mystery endgame is going to be. Particularly on the Reddit discussion boards for the series, fans are speculating about the relationships between these characters. One Sharp Objects theory gaining steam is that Amma is actually Camille's daughter, not Adora's.

The show has hinted heavily — and almost explicitly stated in the most recent episode, "Ripe" — that Camille was assaulted by some local boys in the woods when she was a teenager. Given the fact that Camille and her half-sister, Amma, have such a distinct age difference between them, and that they resemble each other physically so much, some have theorized that Amma is actually Camille's daughter, conceived as a result of her assault. "90% sure Camille was raped in that shed, and gave birth to Amma before leaving," Reddit user PatrickIsAPersonToo wrote in one thread.

It would be extremely in character of Camille's mother, Adora, a narcissistic woman so obsessed with image and reputation, to do anything to hide the fact that her teenage daughter was pregnant. And given Adora's enduring bitterness, judgment, and resentment toward Camille, it would make sense if she was harboring a grudge about that.

"I have a strong feeling that Amma is Camille's child. They keep calling each other 'sister' in a weird way. And when John asks Camille 'Does it get better' she says 'having a child taken away?' or something to that degree," wrote user cpunk121 in another thread, referencing a conversation Camille and John had in the most recent episode.

Some have also noted that there have been plenty of mentions about Camille having children, which she's seemed very uncomfortable with. "I think Amma is actually Camille's daughter after she was raped and her mother is raising her as her own so the family doesn't have a mark of shame in the town," DebtOfALannister wrote. "Pure speculation but I feel the show has been dropping hints with all the people asking Camille if she has kid and Amma asking if she wants kids."

User YouKnowThatOtherGuy also pointed out the fact that Camille's assault seems to have happened quite soon after her other sister Marian's death, and that Camille says "she wasn't even allowed out of the house for nearly a year" after Marian died — that tight leash could have simply been a result of Adora feeling clingy after the trauma of losing one daughter, or it could have been the family's way of hiding Camille's pregnancy. The same user also notes that Amma's friends explicitly tell Camille that she's "old enough to be our mom," even further drawing attention to the possibility.

There are even more twisted takes on this same theory, including one that Alan, Camille's step-father, is still Amma's father — suggesting he and Camille had an inappropriate relationship, or she was abused by him in her teenage years. That one seems like a stretch, especially since there only seems to be indifference, not outright animosity, between Camille and Alan — but Sharp Objects has a history of delivering unexpected gut-punches, so fans aren't writing anything off as impossible.

There are plenty of other clues, as well, that Camille and Amma's relationship is more complicated than meets the eye. Adora asks her husband if he thinks that Amma is safe around Camille — could she be worrying about Amma finding out the truth of who her mother is? Camille doesn't ever appear to explicitly talk about her relationship with Amma, acknowledge her outright as her sister without being prompted, or linger too long on the subject when she's asked if she's a mother. And, of course, she was extremely hesitant to return home in the first place.

Camille isn't keen to talk about her past as a rule, though, so her disinterest in divulging personal details to half-strangers she's seeing again for the first time in years can't be taken as hard proof of anything. And really, any of these hints could be red herrings, misdirections or simply details that people are reading too much into. But some fans are convinced that Amma is Camille's daughter — one Reddit user even said they would "put money on it."

Those who have read Gillian Flynn's book, on which the show is based, will know if there's any merit to this theory. And if Camille does turn out to be Amma's mother, it doesn't necessarily change things as they relate to the murders that Camille is in Wind Gap to investigate.

But the story Sharp Objects is telling has always been about more than the crime at its heart — it's about Camille's relationship to motherhood, family, trauma, loss, and childhood, and all the little details that go into her experiences in those realms. In terms of Camille's narrative, it absolutely matters how exactly Amma fits in, and these fans just might be onto something.